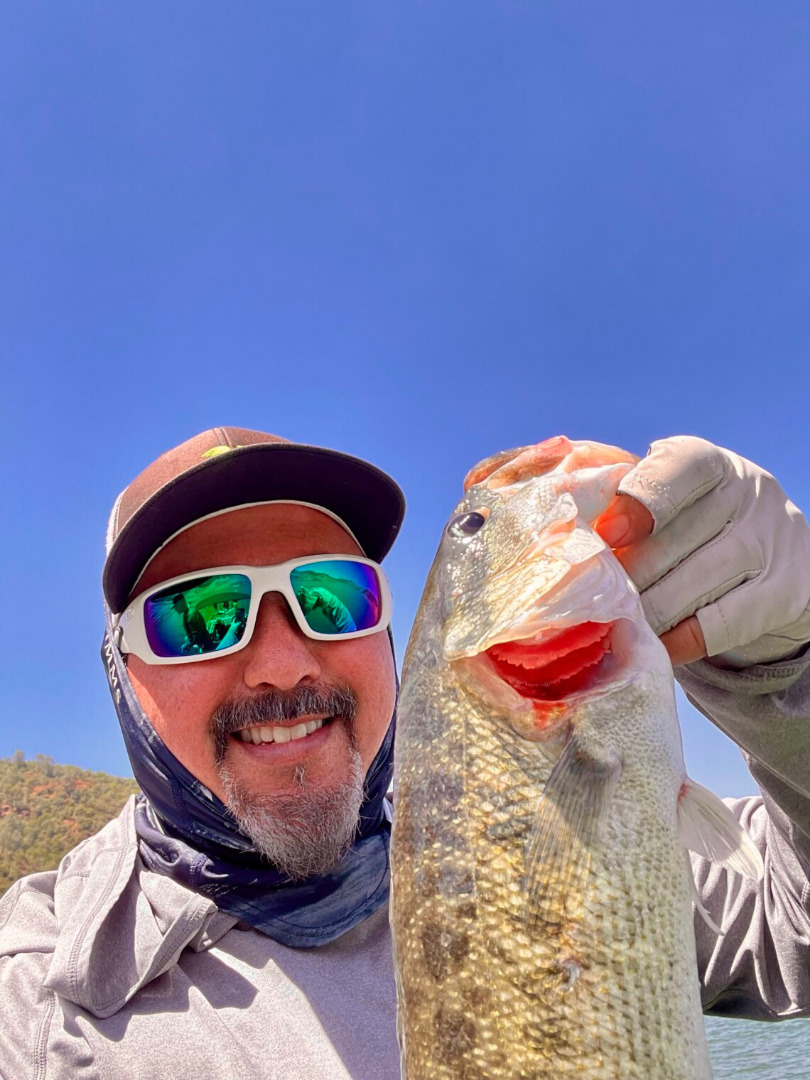 I finally had a free day and decided to take my son, his friend, and his dad out fishing. I really wanted to hit the Delta and throw a frog all day, but the delta can be hard to fish if you’re just learning so I took them to New Melones.  The last time I went to New Melones was a couple of years ago for the Wild West Pro AM and I was shocked at how low the water is! It truly is a sad sight to see when all of your waypoints and island tops I fished before are so far out of the water, it’s crazy.

We missed the early morning bite and started fishing around 7:30AM and immediately started marking fish on my Lowrance graphs. We started on a main lake point and in 10 minutes my buddy caught his 1st ever spotted bass and then about 30 minutes later his son caught his 1st ever largemouth and was so excited! It was a numbers day for the most part and I caught the bigger fish (2 pounders) on topwater.

Lots of fish were suspended over the tops of submerged trees that seemed consistently at 10 feet below the surface.  The largemouth that we did catch were not healthy at all, really skinny, and had sores on them which was sad. The spotted bass were also skinny, but looked good. The majority of the fish were caught on shad baits like Cool Baits 3/16 oz underspin with a 2.8 Pro Blue Red Pearl trailer and a 6″ Aaron’s Madness dropshot.  Around 2:30 it was 100 degrees and we had to jump out and swim to cool off for about an hour before we resumed fishing.

I was throwing a River2Sea Rover in a ghost shad color on a Evergreen Shower Blow rod, Daiwa Tatula 6:1 reel, 50lb Daiwa J-Braid, and a 17lb mono leader.  The fish were right where they were supposed to be, casting on points, secondary points, over submerged trees, as well as close to bank as possible. I did have one that looked over 3 that had to suspended over a tree and shot out near the boat at the end of my retrieve, it seen the boat and bolted.

All in all it was a fun day on the water with our sons and surprisingly there wasn’t a lot of boat traffic for a Saturday.  Hope this information helps you out on your next trip to Lake New Melones. Tight lines and remember any time your able to take a kid fishing. You will have them hooked for life. 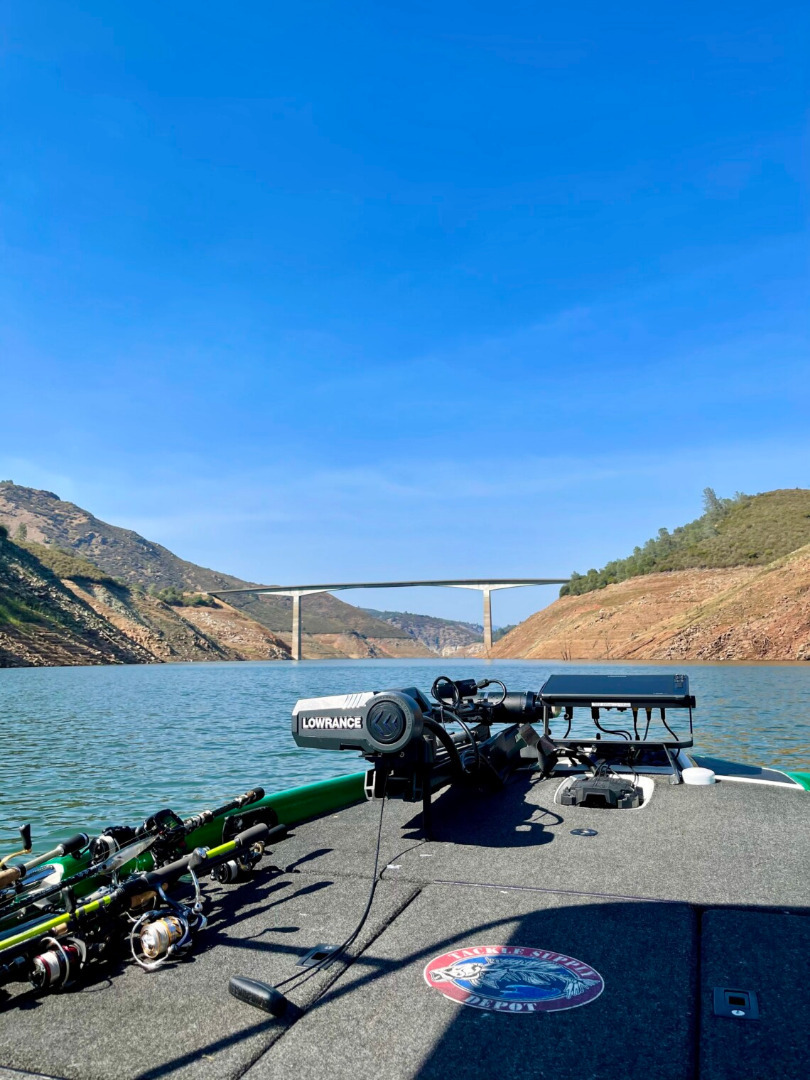 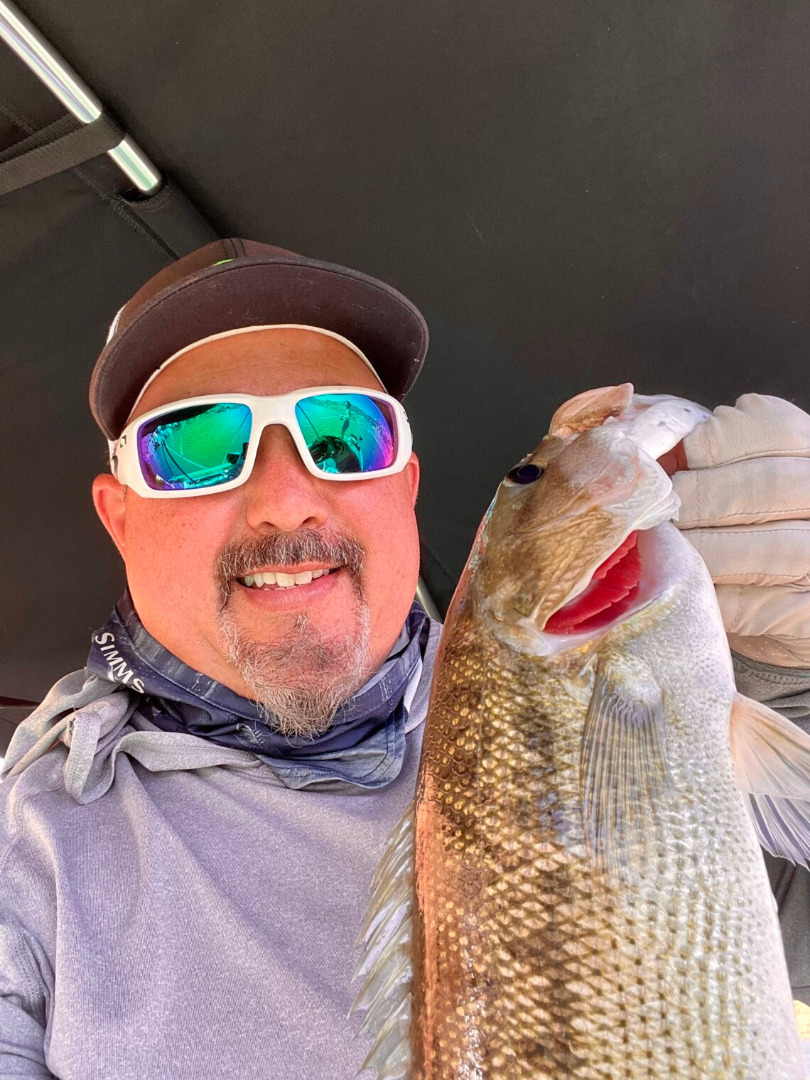 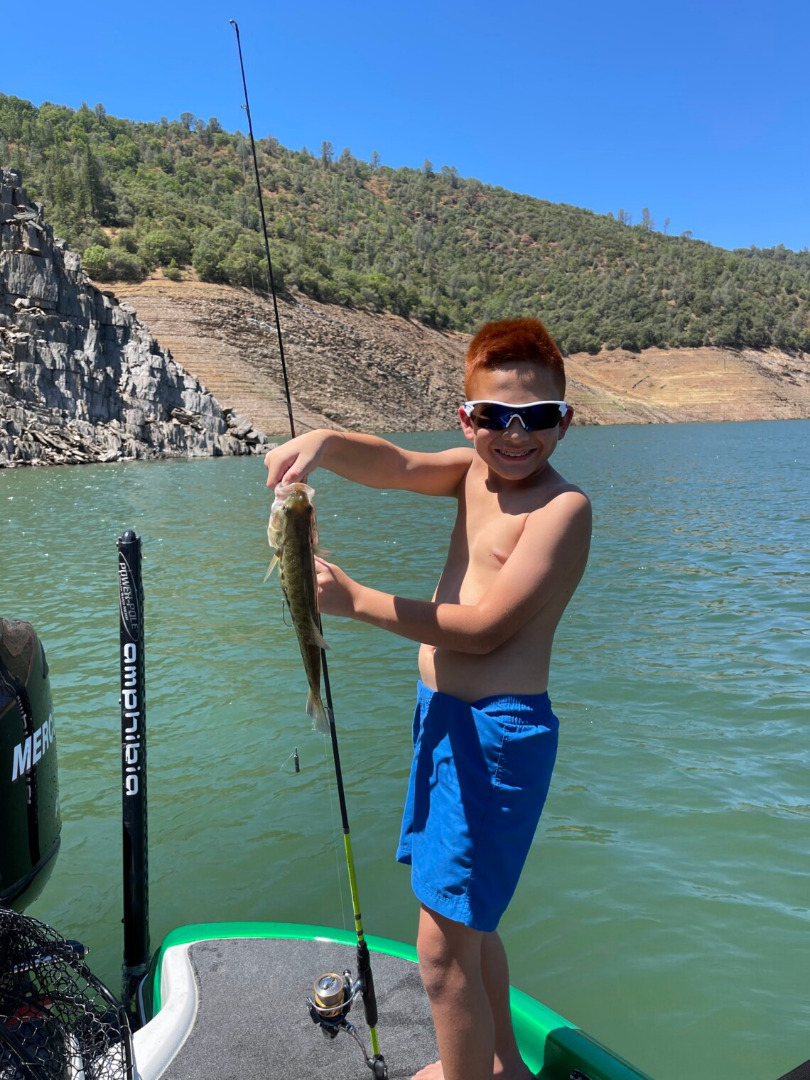 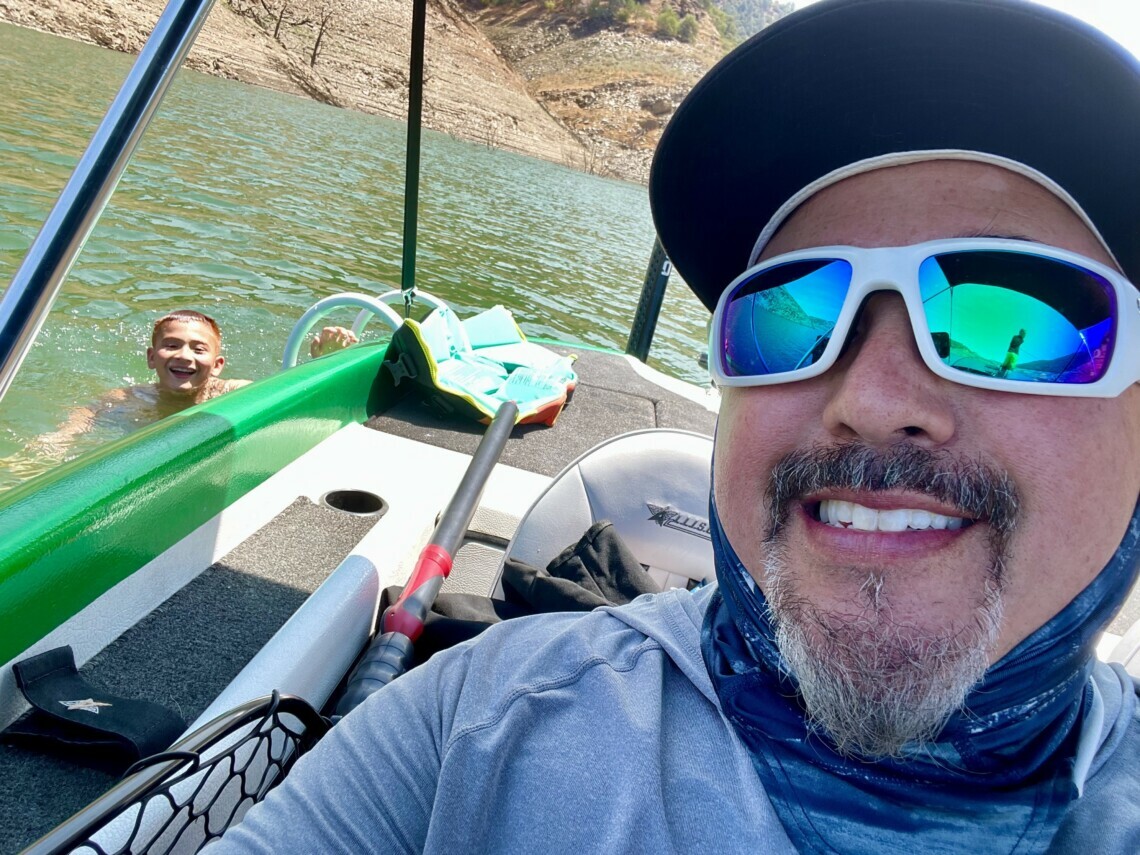 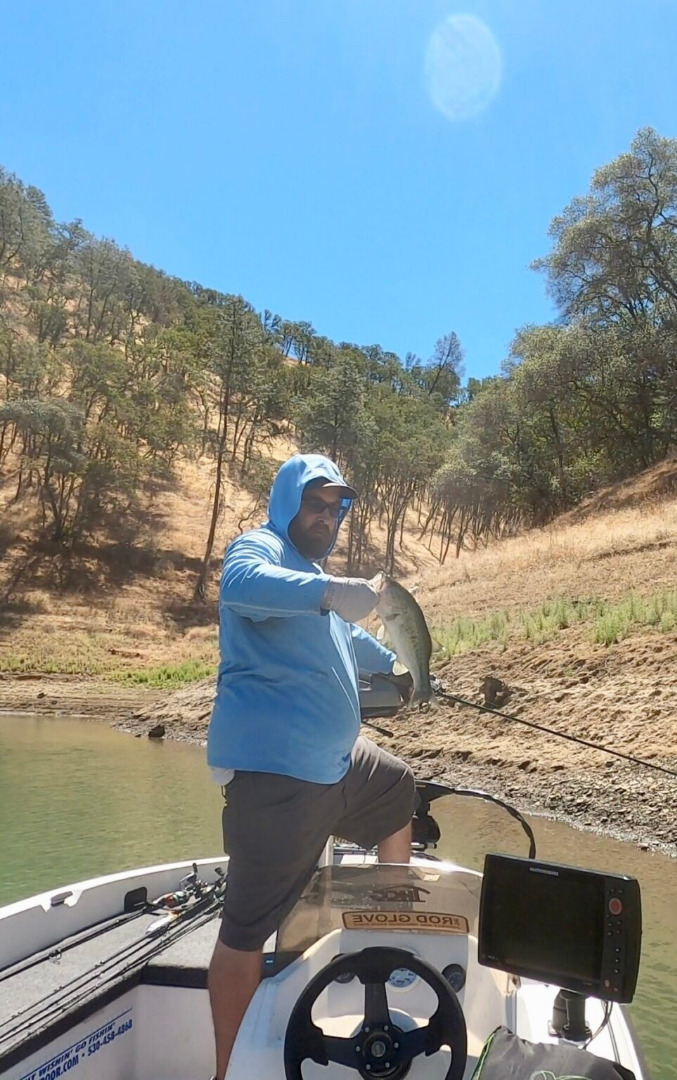 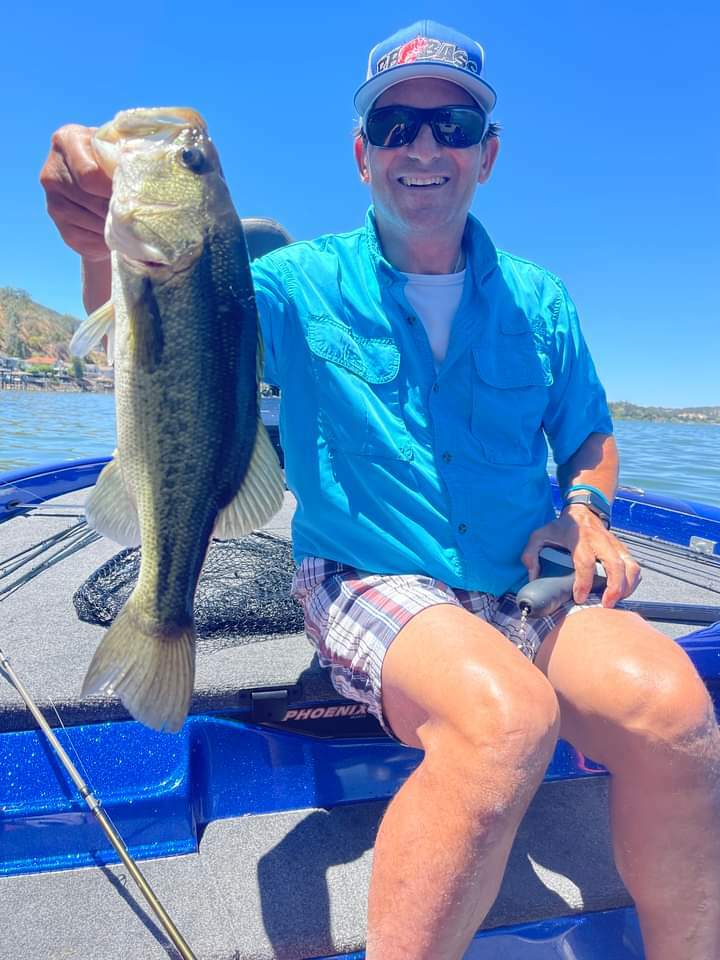