Tuna making their way through nearby water 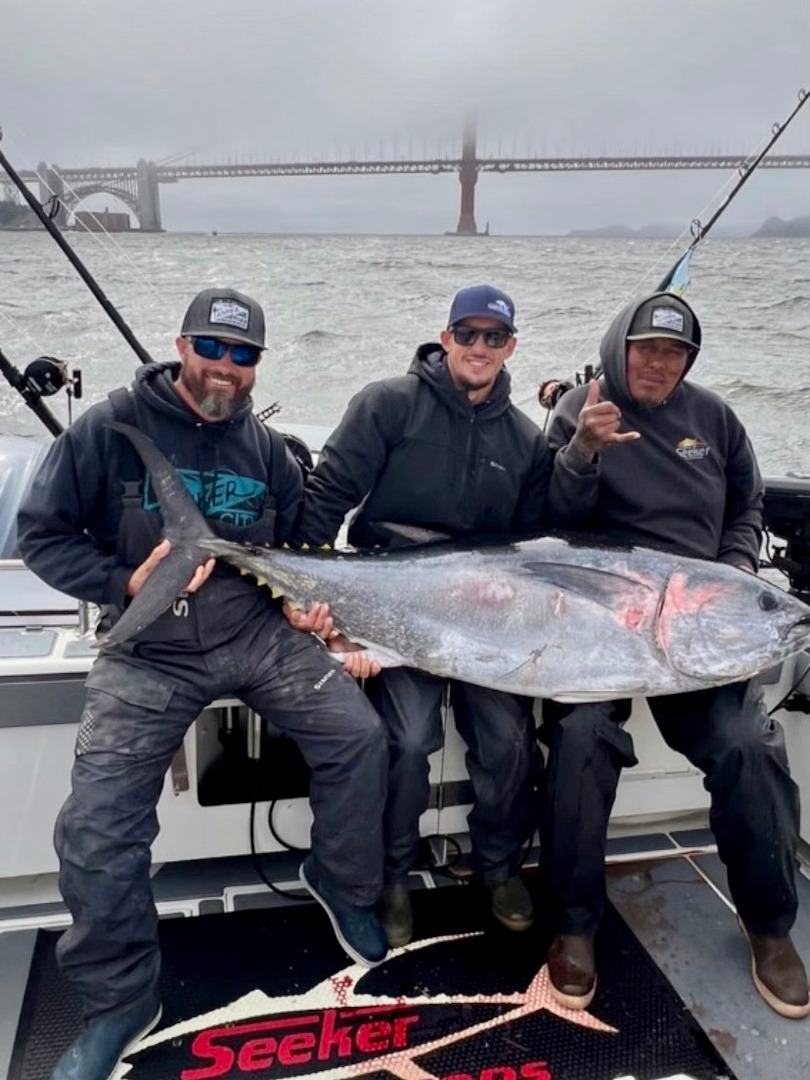 This is an unusual sight, a bluefin tuna with the Golden Gate Bridge as backdrop. These anglers launched from Emeryville and hooked the 170-pound tuna just north of the Half Moon Bay Weather Buoy.


As hoped, this week saw a few more tuna caught in our general area. Big bluefin tuna are moving in. Sightings of the giant tuna have occurred in the deep waters off the Big Sur Coast, and some 30-60 miles from half Moon Bay. A trio of anglers from Emeryville took the long trip last weekend and trolled up one fish just north of the Half Moon Bay weather buoy, about 50 miles offshore. Since then, a number of boats have been out to the deep blue waters offshore, on the hunt. A few bluefin have been reported caught since then, all in that general area. There’s still tons of bait in Monterey Bay, and it’s spreading towards the north coast above Santa Cruz. With luck, we’ll get some big schools of bluefin in our area to test our equipment, stamina and patience soon.

In the meantime, there’s still plenty of action going on inshore. Rockfishing is still going full blast. Chris’ Fishing Trips in Monterey caught limits on every trip this week, up to 350 rockfish for the clients aboard the Star of Monterey on Saturday. Stagnaro’s Sportfishing in Santa Cruz also reports limits for their seven-hour trips and north coast trips this week, with up to four lingcod in the mix as well.

The six pack charters from Santa Cruz are heading north for full limits of big rockfish between Wilder’s Beach and Davenport. Migrating salmon are coming in shallow which is not unusual for fall in those waters and the boys are cashing in on a few flatties in the area also. Rodney Armstrong at Santa Cruz Coastal Charters reported, “Today we went back up to Davenport. The rockfish bite remains steady. We had all our limits of rockfish and four nice lingcod . We had about four or five hitch hikers let go and about four more short lingcod. Then we trolled for salmon on the way home and picked up a nice 25-pounder.” Well-done Captain Armstrong!

Six-pack charter Go Fish Santa Cruz has traveled up the Davenport area nearly every day this week for fine quality rockfish. (Quality means “big fish.”) Skipper JT Thomas said, “We have been fishing for rock cod. The bite continues to be really good near Davenport. The clients are catching limits of a variety of rock fish including big vermillion, yellow tail and coppers.” The bottom dwelling verms and coppers especially can get very big and are almost always very grumpy, which makes for fun and oft times furious action. 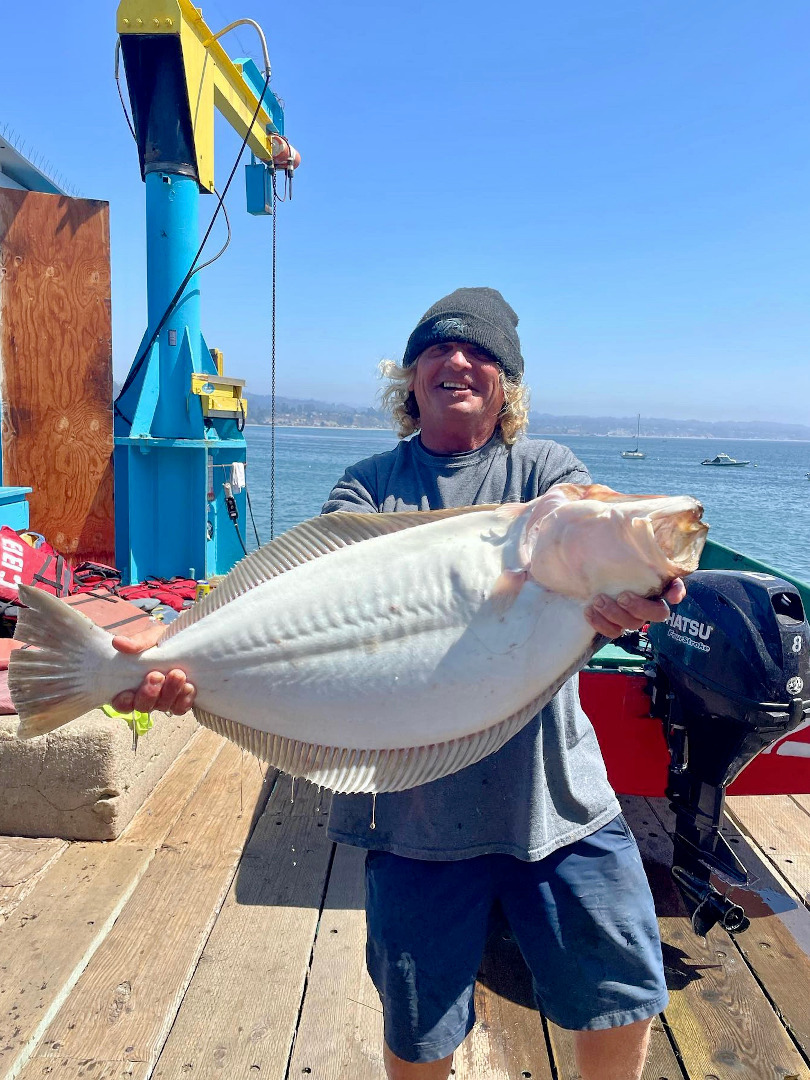 Predatory gamefish biting with so mu 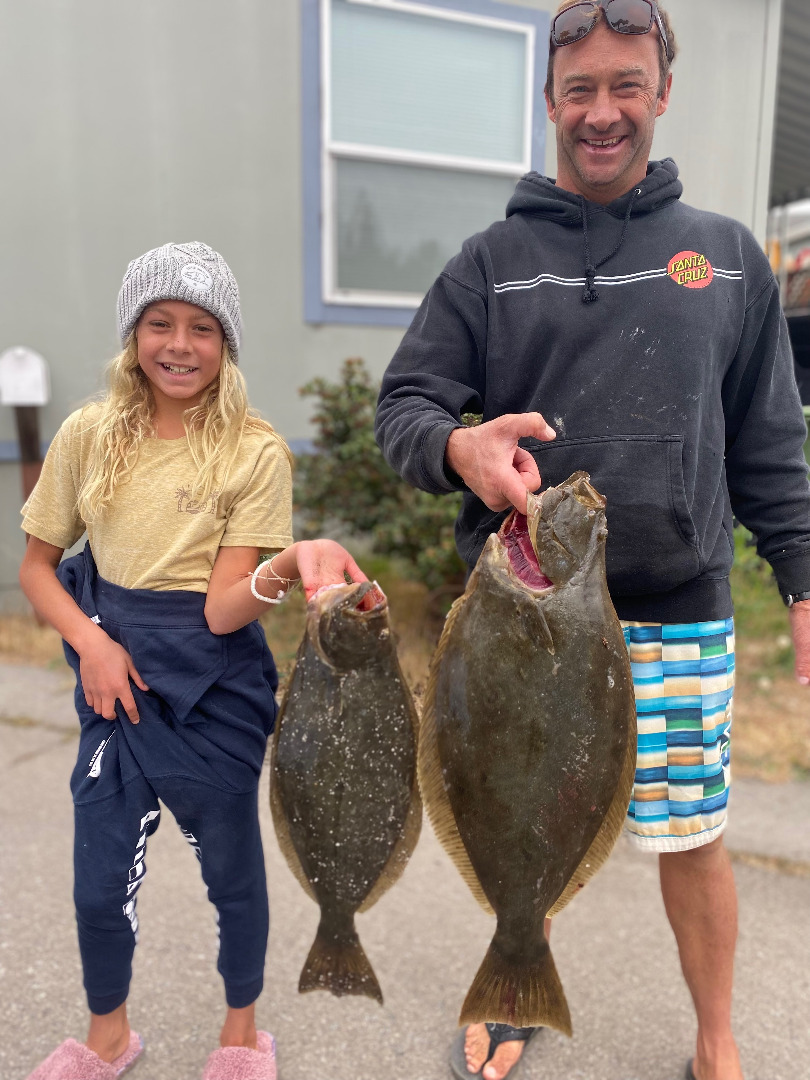 8-26-2022
To everyone’s delight, fishing remains very strong on Monterey Bay, and for a wide variety of species. We’re following a...... Read More

8-19-2022
Local anglers haven’t been bugged by big swells, but the afternoon winds are kind of a nuisance. Still, the mornings...... Read More