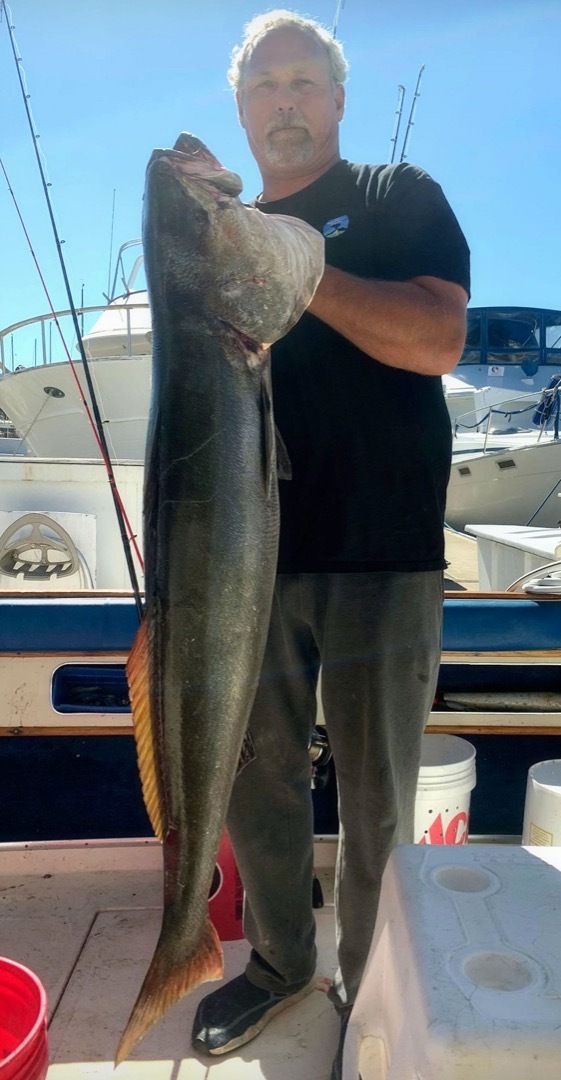 Jeff Ward on the “Psych Ward” from Monterey with a 48-pound sea bass caught off Tioga in 100’ of water while floating fresh squid.
Photo Credit: Courtesy of Let's Go Fishing Radio Show

Thanks in part to mild weather and ocean conditions, fishing remained productive all across Monterey Bay this week. On Wednesday, Todd Fraser from Bayside Marine reported, “The wind was up at the deep water rockfishing area but there were still some nice fish caught near Wilder Beach. Halibut fishing was decent near Capitola and Pajaro in 65-90 feet of water.” Fraser also reported decent halibut fishing for anglers who worked the North Coast beaches.

Charter boat operations remain in full swing mode, with limits of fish being the norm. Stagnaro’s sportfishing enjoyed low winds on Saturday saying, “Today’s seven-hour deep sea trip came home with limits of rockfish for 20 anglers.” Monterey Bay Charters fished deeper on Sunday as well. Skipper Tom Dolan reported, “Jurassic Park trip today and what a beautiful day with a whale show, sea lions circling the boat, overhead a plane doing acrobats, and some serious lingcod, petrale sole and rockfish catching. The lingcod bite was good! Caught our live bait then ran deep to pull up six lingcod to 15 pounds. Afterwards came in closer to shore for limits of blue, olive and china pacific snapper.” The beautiful Miss Beth steams north whenever conditions allow, looking for bigger fish and quicker limits. This week was no exception, according to Beth Norton who said, “Go Fish Santa Cruz Charters fished at Davenport today. Everyone had limits of a variety of rock fish including vermilion, coppers, canaries and olives. They landed a nice ling cod.”

Carol Jones from Kahuna Sportfishing in Moss Landing continues to maximize her long-range trips to the Big sur area. Jones told us, “Yet another beautiful day on the water with limits of rockfish and seven lingcod from the Point Sur area. The day before we were down at Lopez near the little town of Lucia.” Jones then added, “ Last week when we went to Lopez, Captain Brian Cutting was bouncing around a little, looking for the right kind of fish. So, he moved to the last spot where he saw a lot of fish on the bottom.” Jones added, “When the clients dropped their baits, he watched the whole crowd of fish came up off the bottom from 80 feet.” Cutting was dismayed, thinking they must be bocaccios, great fighters but not the best table fare. It was a wonderful surprise when he saw multiple doubles of vermilion coming up over the rail. “Those big reds never do that. It’s because there’s no pressure down there,” Jones summed up.

Chris Arcoleo at Chris’ Fishing Trips heads south whenever he can as well. “Local trips have been good we’re getting limits,” Arcoleo reported. “The quality goes way up when we get down to Pt Sur. We’re averaging about four days a week down there. Otherwise, there’s been a few white sea bass around, but that bite has dropped off. There wasn’t a whole lot of squid down here just enough for the sea bass. It really has been good fishing.”

While the number of seabass in our area might be dropping, there are still a few around for dedicated (and lucky) anglers. Big fish honors this week go to Jeff Ward on the “Psych Ward” from Monterey. He worked the area near Tioga Street in 100 feet of water and found at least one of the monster croakers this week. 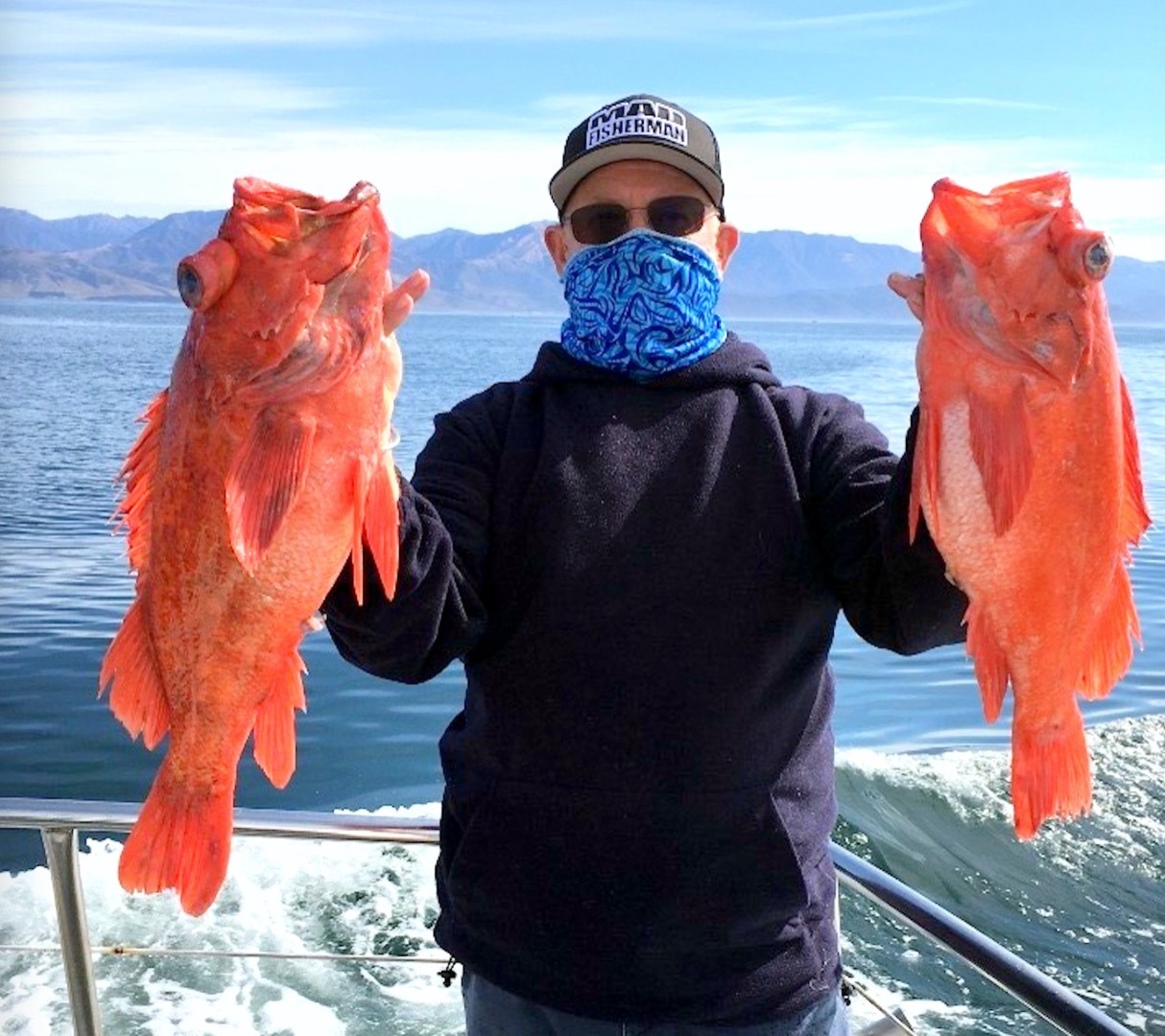 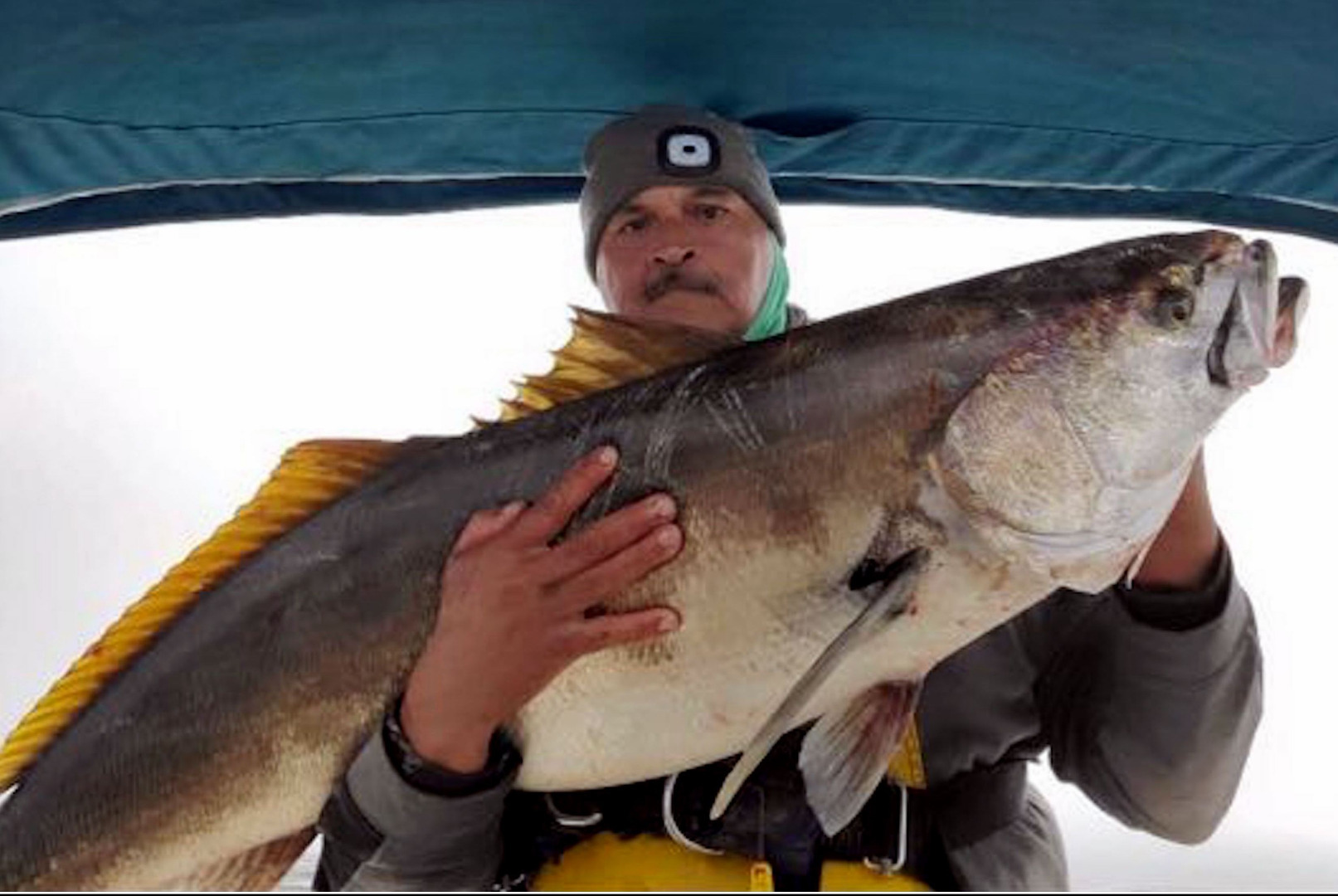 10-9-2020
The northwest ground swell that hit last week has persisted. Fish seemed to have gotten used to it, because the...... Read More