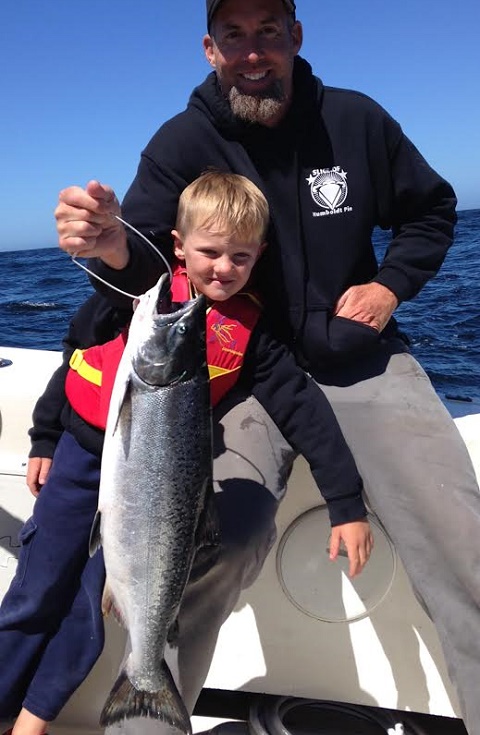 Chinook Salmon
Darren Cartledge and his young son Declan teamed up to land a nice king salmon while fishing off the coast of Eureka >on Sunday. The young angler did most of the heavy lifting, with a little help from dad and Capt. Marc Schmidt of Coastline Charters.
Photo Credit: Kenny Priest

The 2016 sport salmon season out of Eureka ended Monday much like it began on May 16. The opener found the ocean teeming with life; whales, krill, birds, and other baitfish. And that’s exactly how the ocean looked last Monday, with salmon flying over the rails at a pretty fast and furious clip. All the charter boats put on limits well before noon, with salmon ranging from barely keepers to fish in the 20-pound class. Trinidad also had a couple days of good salmon fishing, with quite a few limits being reported on Monday. And it was really nice to see the ocean, at least out of Eureka, loaded with two-year old kings. Most were fin-clipped, which would lead to believe they could be bound for the Sacrament River. Seeing all those fish certainly added some hope for next year, and was a very fitting end to what was a pretty exceptional salmon season.

According to a press release, the event is centered on a winter-long promotion of steelhead angling opportunities, education, and conservation. Anglers who catch (hatchery) and release (wild) steelhead on the Trinity, Mad and Eel rivers are encouraged to register for the contest, take a photo of their fish, and post the photo to the HSD Facebook page. Anglers who donate $10 to register and who posted a photo will be eligible to win more than $10,000 in cash and prizes and will receive a HSD/HLA discount card to be used at area hotels and at HSD events. In addition to the fishing contest, organizers have partnered with Pacific Outfitters in order to facilitate spawning tours along the three watersheds.

Founded three years ago by Mad River Alliance director Dave Feral, Feral said HSD was created to build community awareness and fund continued restoration and recovery activities on Humboldt rivers. “Our aim is to promote Humboldt in the winter as a sportsmen’s paradise and an eco-tourist’s dream. The rivers and forestlands that support their return and propagation are at the heart of Humboldt’s appeal and beauty. We want the world to know this. Seeing wild fish returning to their native streams and perpetuating their species will appeal to anyone who has an affinity for the outdoors and a love of nature,” said Feral. For more information on this year’s event, visit humboldtsteelheaddays.com/

The Oceans:
Eureka
“It looks like the ocean might lie down enough Friday and Saturday for a trip to the Cape or to drift for halibut,” reports Tim Klassen of Reel Steel Sport Fishing. “The ocean was flat on Tuesday and at least one Pacific halibut was caught north of the entrance in 300 feet of water,” added Klassen. The California halibut are still biting inside the bay, with boats fishing the western channel north of Woodley Island catching a couple keepers per outing.

Shelter Cove
Captain Jake Mitchell of Sea Hawk Sport Fishing reports the effort slowed due to some windy conditions last weekend. “I was off the water last weekend, but from the sounds of things it's been blowing pretty good and there hasn't been much effort. I fished for salmon last Thursday and ended with 10 fish before getting blown off around noon. On Friday it was blowing at first light so we stayed close to home and got limits of lings and half limits of rockfish and called it a half day.”

Crescent City
The wind has really been blowing, so not many boats are going out reports Leonard Carter of Crescent City’s Englund Marine. He said, “The salmon season never did materialize here. There’s been lots of bait around all season, but the salmon never showed up in numbers. Not many reports for halibut and rockfish as the oceans been rough. A few perch are being caught, but it’s not red hot,” Carter added.

The Rivers:
Lower Klamath
There’s quite a few steelhead in the river right now, but we’re not seeing a lot of salmon reports Alan Borges of Alan’s Guide Service. “It feels like the end of July or beginning of August where we’d be seeing more steelhead then salmon. The half-pounders have showed up, and they’re big and healthy. We are catching a few adult steelhead a day, but it’s tough to get past the half-pounders. We haven’t seen a lot of jacks show yet, but we’re catching a few,” Borges added.

Upper Trinity
The consensus is there aren’t many fish around right now reports Tim Brady of Weaverville’s Trinity Outdoors. He said, “The weir counts have been horrible so far, so I don’t think the fish are moving into the lower river yet. And with the current flows, the fish aren’t going to travel in the same places as they normally would when the waters flowing at 450 cfs. The bank anglers are having a real tough go right now. And there isn’t much boat pressure either, likely due to the less than stellar fishing reports,” Brady added. Flows will be reduced from Lewiston Dam from 1,300 cfs down to 1,000 by Wednesday according to an email from the Bureau of Reclamation.

9-2-2016
Thursday begins the final push towards the finish line of our 2016 saltwater season here on the North Coast. Come...... Read More