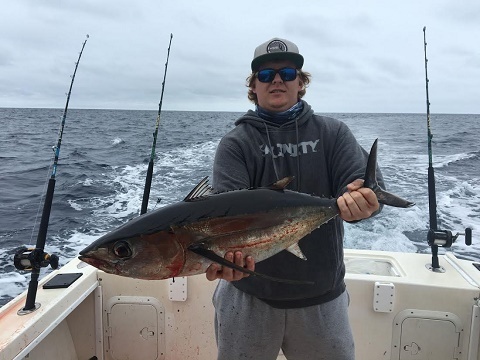 Thursday begins the final push towards the finish line of our 2016 saltwater season here on the North Coast. Come daylight, boats will have the option of targeting salmon, halibut or rockfish. Or all three. The last of the four salmon seasons will be a particularly short one — lasting only through Monday. Hopefully the salmon will be in a little better biting mood than when the previous session closed on Aug. 16. Reports are the birds and bait is still hanging around the entrance to Humboldt Bay, so that’s a likely starting point. The Pacific halibut season has the potential to be a short one as well. The California Recreational Fisheries Survey has estimated that 21,638 pounds have been caught towards the 29,640- pound quota. Some consecutive days of calm ocean waters could easily fill the quota by mid-September.

Klamath River quota reminder
Just a reminder, the lower Klamath quota (555) for adult Chinook salmon has been met from the Hwy. 96 bridge downriver to the ocean. The only section closed to fishing is the spit area. The rest of the lower river remains open to fishing, but is under a size restriction for Chinook salmon. All salmon over 22 inches must be released. The Klamath River above the confluence with the Trinity River will remain open until 189 adult Chinook have been harvested.

Free Fishing Day on Saturday
This Saturday, Sept. 3, is the second of California’s two 2016 Free Fishing Days, when people can try their hand at fishing without having to buy a sport fishing license. All fishing regulations, such as bag and size limits, gear restrictions, report card requirements, fishing hours and stream closures remain in effect on Free Fishing Day. Every angler must also have an appropriate report card if they are fishing for abalone, steelhead or sturgeon anywhere in the state, or salmon in the Smith and Klamath-Trinity river systems.. For more information on Free Fishing Days, please visit wildlife.ca.gov/Licensing/Fishing/Free-Fishing-Days

Humboldt Bay
Phil Glenn, who runs Bluefin Charters out of Woodley Island, reports the California Halibut action in Humboldt Bay is still going strong. “There’s been quite a few more legal ones around lately, and you’ve got a real good chance at catching your limit. The North Bay is still the most consistent area, with live anchovies being the bait of choice. The bay is still plugged with bait, and you’ll find plenty around the Coast Guard Station on the ebb and near the marina on the flood tide,” added Glenn. The daily bag and possession limit is three fish and the minimum size limit is 22 inches total length.

The Oceans:
Eureka
Since Sunday, the ocean has been as flat as it’s been all year. This has made for some red-hot rockfish action down at the Cape, and plenty of boats have been taking advantage. “A ripping uphill current for the last week has made for a fast drift and aggressive-biting fish,” said Tony Sepulveda of Shellback Sport Fishing. “The fishing has been fantastic and lings up to 34 pounds have been on the heavy chew. We’re also seeing tons of big coppers and vermilions too.” Tim Klassen of Reel Steel Sport Fishing also reports a wide-open bite, with easy limits of big lings and a nice variety of rockfish. With a heavy dose of rockfish lately, most boats will be targeting salmon come Thursday morning. According to both Klassen and Sepulveda, the entrance to Humboldt Bay still looks really fishy. “The canyon might be another place to look. There hasn’t been a lot of sign up the beach,” said Sepulveda. “I’ll likely start at the entrance and work my way out,” added Klassen. “This time of the year we’ve also found fish off Mad River as well as the dumpsite.”

Shelter Cove
We’ve been doing a lot of running around this past week reports Captain Jake Mitchell of Sea Hawk Sport Fishing. “Last Wednesday and Thursday we put in limits of salmon from just inside the Hat, where the fish have been holding right on the bottom. On Friday, we ran to Rodgers Break for quality limits of rock fish and lings to 24 lbs. Sunday and Monday we ran 50-plus miles outside of the Gorda Valley chasing tuna. We got 10 on Sunday and lost a few more, and never had a bite on Monday. On Tuesday, we were back on the salmon grounds and we had limits of salmon and lings by noon.”

Crescent City
With the nice water we’ve had, the rockfish action has been over the top reports Chris Hegnes of Crescent City’s Englund Marine. He said, “There’s still some Thresher’s around, and guys fishing for rockfish are hooking a few. Hopefully the calm water will stick around now that salmon and halibut are opening back up,”

The Rivers:
Lower Klamath
The cooler water from the Trinity reached the lower Klamath last weekend, and a quite a few more fish have entered the river. The last few days have seen a nice mix of jacks, adults, and steelhead. More half-pounders have also made their way into the river.