It has been several weeks since I’ve wet the line and this past Saturday looked to be a perfect time for me to make a break for the beach.  I only had a few hours of sand and surf time so I didn’t want to spend it in the car driving in traffic on the roads.  Instead, I just drove a few minutes down the street to park near the Great American Highway, which runs parallel to San Francisco’s Ocean Beach.

Peak low tide was at around 11 AM and would make a nice time to go to the beach.  You can more easily see any underwater structure like troughs and cuts.  Find those and, as the tide comes in, you will be well-positioned to fish where the bait fish are and, hopefully, where striped bass are lurking and waiting to ambush the smaller fish.
The high temperature was predicted to be 71 degrees, so I wasn’t expecting a ton of people at the beach.  The massive crowds appear whenever it gets to be 75 or above and we would fall short of that temperature.  Still, there was no shortage of joggers and dogs and the occasional surfer.  Waves were small, so there weren’t a lot of surfers to cast around thankfully.
The last time I fished Ocean Beach in mid-April, there was an unfortunate tragedy of two young men drowning in the strong current just about 1,000 yards north of me.  Even though today’s conditions looked calm enough, one has to always maintain focus while fishing at Ocean Beach.  Wearing chest-high waders, I’m extra wary for any large wave that might spill into them causing me to get weighted down.  For that reason alone, I try and stay no deeper than knee deep in that water at any given time.
The jacksmelt are fatter and longer than the smelt you’ll catch inside the Bay on San Francisco’s Pier 7 (one of my other fishing haunts).  The fish fight until the end and can often free themselves off the hook by their hyperkinetic shaking.  I was using a Carolina rig with a 1 ounce sliding sinker weight, a Berkeley Gulp! camouflage-colored worm, and a #6 bait holder hook.  The hook, by itself, was not enough to keep the fish on, so after the fish was close to the water’s edge, I would lift it up into the air and swing it toward the shore.  That way if the fish shook itself loose at the very end of its journey, it would be flying toward dry sand and I could then pick it up.  If you let the jacksmelt bounce on the wet sand in front of you as you finished reeling in, it would free itself from the hook in a matter of seconds.  In fact, I didn’t have to take out a single hook from any of the nine jacksmelt I caught.  Each freed himself on the beach.  I then picked each one up and threw it back into the water.
Despite being a mild day, there was no shortage of joggers, walkers, and dogs--lots of dogs.  They think my sand spike is a shiny-looking tree worthy of marking their territory.  I’m always looking over my shoulder to make sure the dog’s owner knows I’m watching the dog closely, which leads to the owner calling the dog away from what would have been his next bathroom break.
Well, after catching and releasing nine jacksmelt, I was ready to go home.  I was trying for number 10 when a barred surf perch came knocking.  It wasn’t huge--probably around 11 inches and just shy of one pound.  When I hold it up close to the camera, however, it takes on monstrous-like proportions!  It was nice to know the perch were still out there, as I had failed to catch any the last few times at Ocean Beach.
After finishing my day at Ocean Beach, I asked a passerby to take a photo of me.  Of course, here I am turning my back on the ocean--a big no-no and I’ll remember better next time.  Some of my fishing friends are telling me that the striped bass season is getting off to a slow start and that they’re playing hide and seek at the moment.  I know some are being caught here and there up and down the coast, but not at the same numbers or same sizes as last year at this late May time.  There’s still a few more months in the season, so I’m going to start stepping up my efforts with weekly trips to the beach over the next couple of months--look for another report soon! 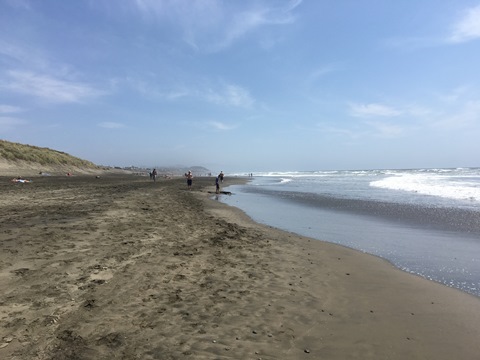 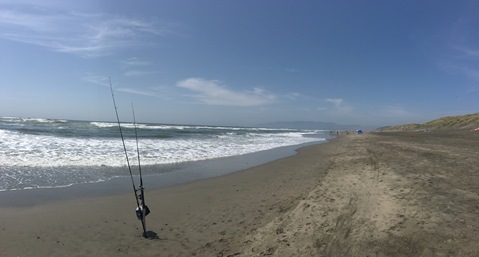 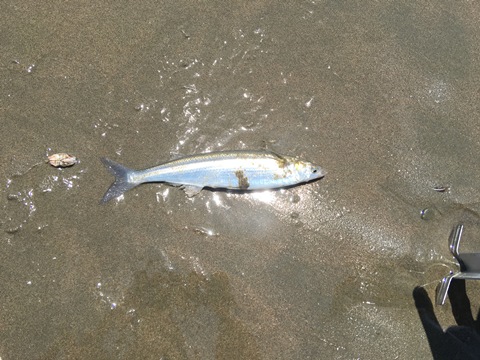 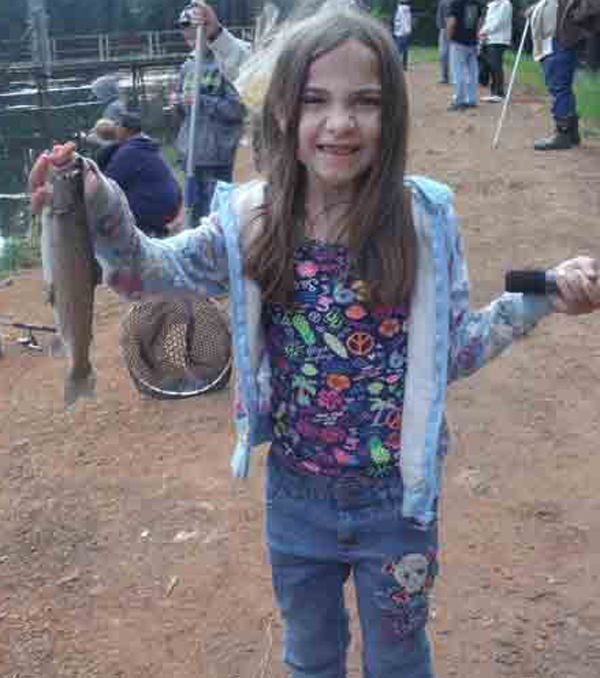