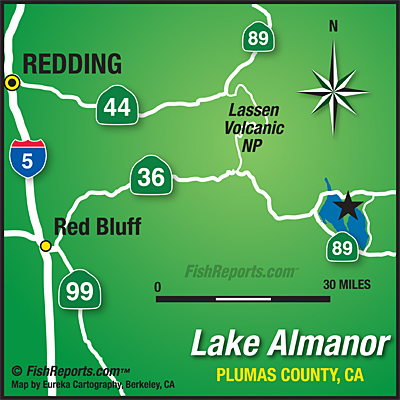 Lake levels are still very good, water clarity is excellent to 12 feet or more, and surface temps are still holding around the 69 to 70 degrees. A solid warming trend is forecasted for the north state this week making for a great fall opener.

Even with the noticeably cooler mornings, the warm surface temps have fish staying down.

The last couple of days the trolling bite has started to pick up as that moon cycle is waning.

Expect it to rev back up and shift into another gear by the time you read this.

Fishing pressure around the lake has been light, with half the boats trolling and the other half are on anchor bait fishing. And from all the reports I have heard, the bait guys are doing just a little better than the trollers.

Trollers are getting a few fish from 35 to 55 feet down all morning, mostly browns and rainbows and an occasional salmon. And a few of the bigger salmon have started to show. Not off anchovy, but trolling.

Two big salmon in the five pound range were reported from trollers pulling Needlefish. We had one on this week that just about spooled us down to the last 6 wraps before turning that fish back toward the boat, and it got off after a 5 minute tug-of-war, never even saw that fish...but it was a salmon. Only big salmon take runs like that.

Shiners and Needlefish are always a good bet. Our biggest fish this week has a four pound rainbow that hit a "Real Image" #2 Needlefish trolled down at 40ft.

Bait guys are catching a few nice fish during the morning along the shore in Lake Cove, using suspended Crickets, Mealworms and crawlers.

The evening bait bite has been good over at the A-Frame with several reports from different anglers of Browns in the 4.5 lb. range.

White jigs!  keep a rod ready with a white jig.  Browns are chasing smelt. If your bait fishing and you have browns rolling around, get out that jig and work it.

The brown trout spawn will be starting soon, how soon? Depends on how fast the water cools, and with the warming trend this week it will be later rather than sooner, I would think. However when the hens start moving into spawning areas the big boys will not be far behind.

Big bull browns are loners and generally don't hang out with one another, but when its time to reproduce we will see larger concentrations of big boys moving into these spawning areas.

Some of my biggest fish have come in the fall, from October into early December, weather permitting.

Last fall we had several  big shouldered hook jaw bruisers in the 6 to 8 lb. range, and there are much bigger fish than that  swimming around these waters. Not just browns either, larger rainbows will be lurking around looking to feed off the spawned eggs that have floated out of the nests around the lake bottom. Fish will be tipping a little more picking up these eggs, and cured roe or salmon eggs along the bottom can get a hit anytime.

2011 will be a winter to remember, the most measurable precipitation at Almanor going back to 1951.

Insect hatches were huge and went on all summer. Pond Smelt are everywhere, huge schools of baitfish the size of school buses are spread across the east basin, and along the west shore. There's plenty of food available and our fish populations are in good shape right now, and there's still the whole fall season just ahead.

The hot lure this week has been that #2 "Real Image" Needlefish, it really looks like the smelt we have here. Access accurate Lake Almanor data at http://www.project2105.org/lake_levels.htm.  Doug Neal (530) 258-6732 http://www.almanorfishingadventures.com