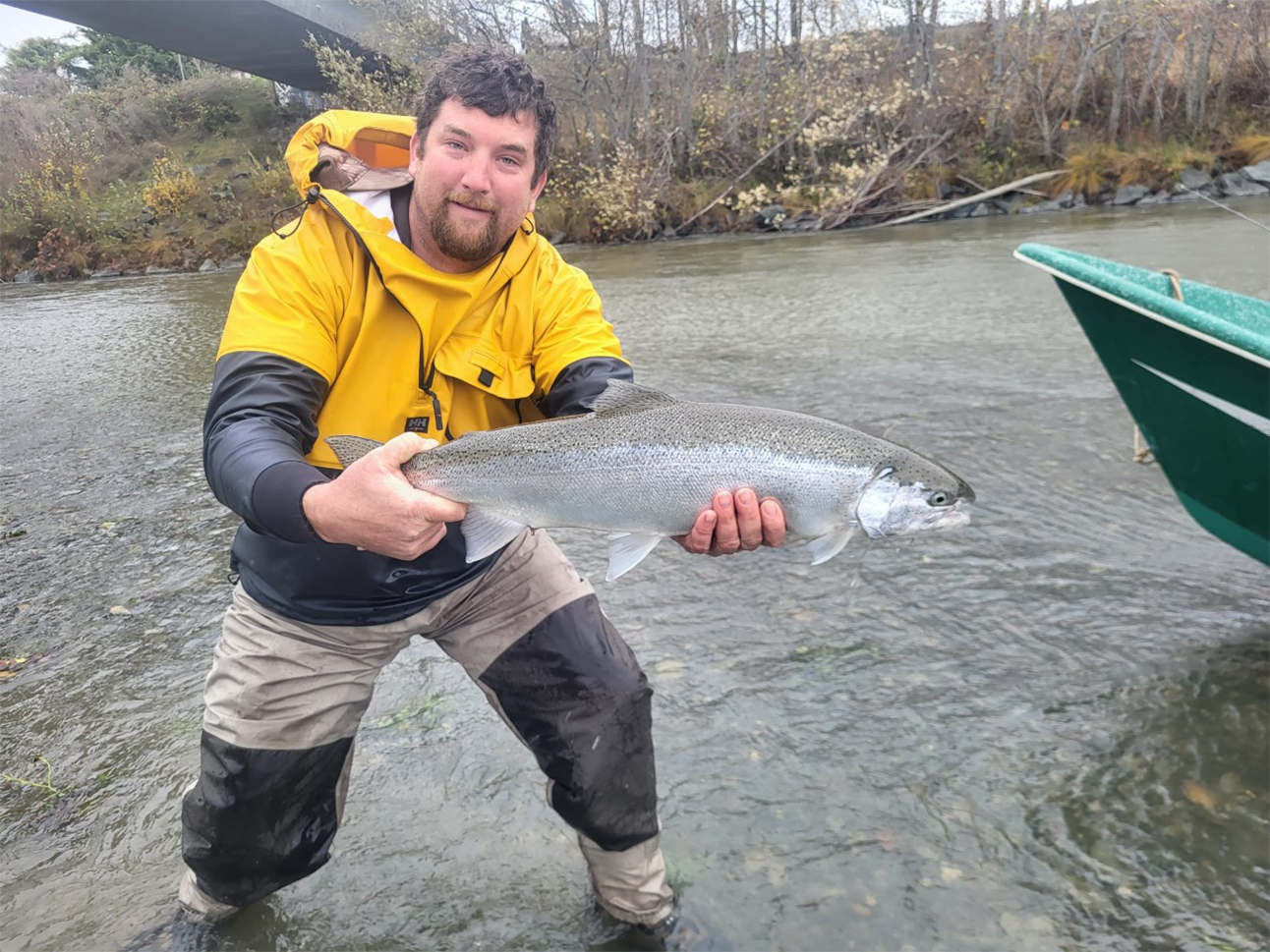 After a very wet weekend that saw all our coastal rivers plum full of water, just about all are now in fishable shape. And the ones that aren’t will be in the next couple days. The reason behind the quick clearing of the rivers is twofold. After years of drought, the soil is extremely thirsty. Water from the season’s first big rain is typically gobbled up by the soil, leaving less to flow into the rivers. Also, the surrounding mountains received a lot of snow over the weekend. Combined with extremely cold temperatures, not much runoff is making its way to the rivers. What all of this means is the rivers are dropping quickly, and will be low and clear before we know it.

Both the Smith and Chetco rivers were fishable Monday following some impressive weekend rain. In the Humboldt area, the main stem Eel will likely be one of the better options this week. It was a bit off color Wednesday, but the way it’s dropping, it should be in great shape by Thursday. The South Fork Eel and Van Duzen rivers are both dropping out, but should remain open to fishing through the weekend. The Mad will be another top option. The river was nearing perfect flows Tuesday and was close to turning green. It’s still early in the winter steelhead season but, if you’re jonesing to try your luck, there is green water to be had.

Weather ahead
According to Jeff Tonkin of Eureka’s National Weather Service office, there isn’t any substantial rainfall in the forecast for at least the next 10 days. “With a big high pressure aloft, it will keep us dry for a while,” said Tonkin. “Conditions will remain cold, so we don’t expect to see a lot of snow melt affect the rivers either.”

Weekend ocean conditions/crabbing
Conditions look excellent for the rest of the week and into the weekend. Winds are forecast up to 5 knots through Sunday with waves up to 4 feet at 8 seconds. The crabbing remains excellent off shore with private and charter boats scoring easy limits. Crabbing out of Trinidad has slowed slightly, but boats and kayaks are still getting limits of Dungeness crab.

Mad River Steelhead Derby Starts Jan. 1
The Nor-Cal Guides and Sportsmen’s Association (NCGASA) is hosting its fourth annual Mad River Steelhead Derby from Jan. 1 through Feb. 28, 2023. Anglers must be signed up prior to the start date to be eligible to win cash and prizes. Only hatchery steelhead can be entered. The largest steelhead in the adult division will win $500 for first place, $300 for second place and $150 for third place. The three largest fish entered into the youth division (16 and under) will win gift cards to local tackle stores. Plus, the three best steelhead fishing videos will win product packages from sponsors. Anglers can sign up online or in person at RMI Outdoors. Part of the proceeds benefit the Mad River Steelhead Stewards volunteer angler’s broodstock collection program that works in concert with the California Department of Fish and Wildlife. For more information, visit madriversteelheaderby.com.

The Rivers:
As of Thursday, all North Coast rivers subjected to low-flow fishing closures including the Mad, Smith, main stem Eel, South Fork Eel, Redwood Creek and Van Duzen were open to fishing. As a reminder, the Mad River from the mouth to 200 yards upstream, the main stem Eel from the South Fork to Cape Horn Dam and the Mattole River are all closed until Jan. 1, 2023. The Department of Fish and Wildlife will make the information available to the public no later than 1 p.m. each Monday, Wednesday and Friday as to whether any river will be closed to fishing. The rivers can be opened at any time. The low-flow closure hotline for North Coast rivers is (707) 822-3164. For more information, visit fishingthenorthcoast.com/2021/09/22/2021-2022-low-flow-information-for-north-coast-rivers/.

Mad
The Mad is rounding into shape after peaking at 10 feet over the weekend. Was green Wednesday and will fish into the weekend. With no rain this week, expect clear conditions next week.

South Fork Eel
The South Fork reached 6,300 cfs Sunday but is dropping out quickly, to under 550 cfs by Thursday. It should remain open to fishing throughout the weekend. There should be a few steelhead on the lower end.

Van Duzen
Flows were down to 340 cfs Thursday after reaching 4,400 Sunday. It will be low by the weekend but should be fishable.

Smith River
The Smith was below 7 feet on the Jed Smith gauge by Thursday morning after peaking at 12.75 feet Saturday night. The river is low and clearing, and will remain that way through the weekend. There should be some early steelhead around but the season typically gets going after Christmas.

Chetco
“The Chetco was in good shape for salmon and steelhead Monday, but catch rates were poor,” said Andy Martin of Wild Rivers Fishing. “A few steelhead were caught by plunkers at Social Security Bar. Flows hit 10,000 cfs and were down below 3,500 cfs on Monday. Expect a few late salmon and early steelhead this week. Peak season for steelhead begins after Christmas.”

Elk/Sixes
According to Martin, another big school of salmon showed up at Elk River Hatchery Sunday and Monday with the latest rain. “Catch rates were good, but many of the fish were already dark. The Sixes was still high and muddy on Monday, but should fish well this week. Salmon season closes Dec. 31 on the Sixes.”

Storms and Steelhead in the Forecast 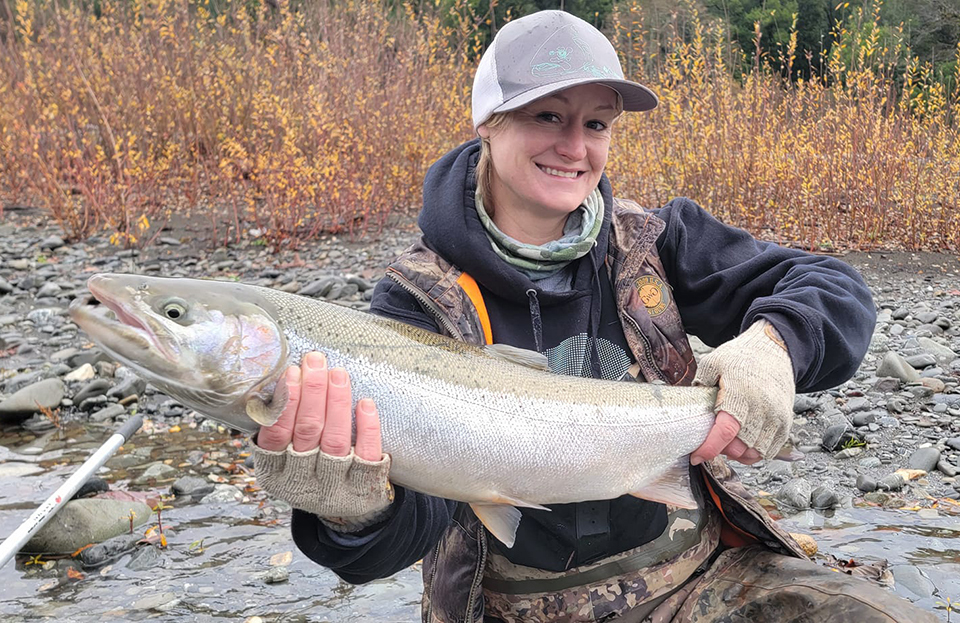 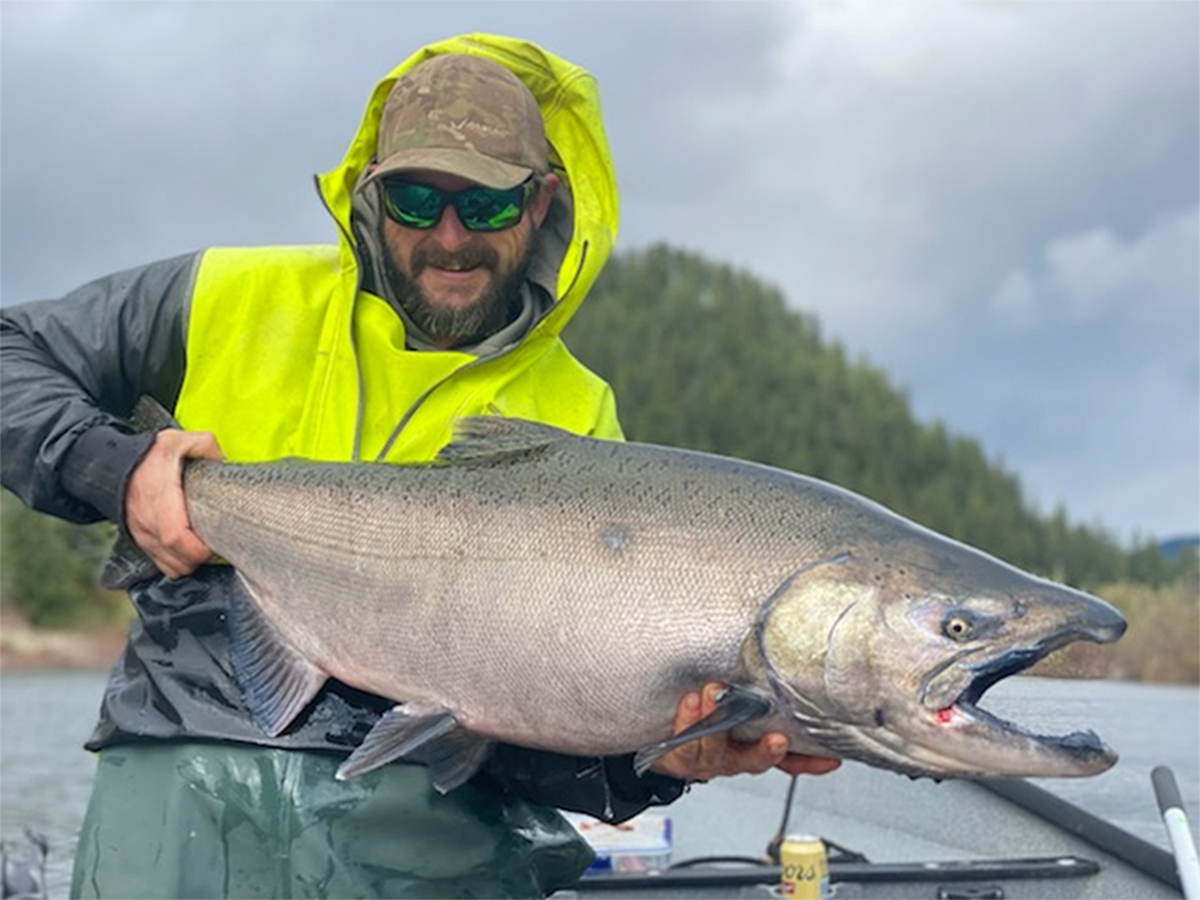 12-1-2022
The rains that fell in early November were a godsend for our late-fall salmon runs. The increased flows allowed some...... Read More