Klamath Closed to the Take of Adult Kings 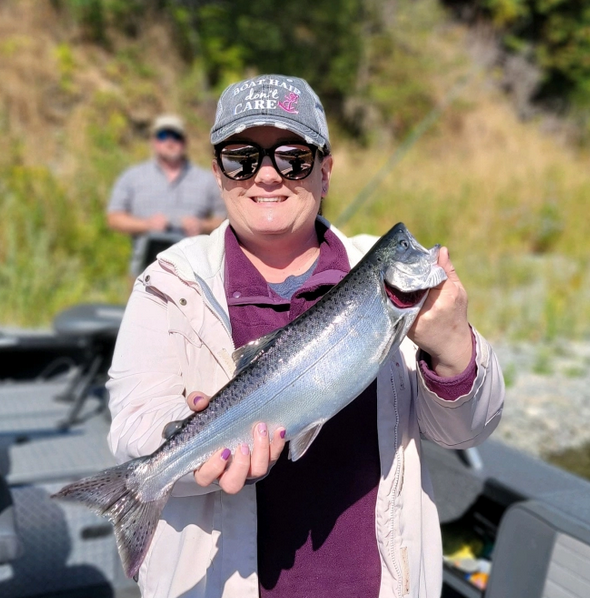 Eureka resident Tia Hauan holds a jack salmon taken on the lower Klamath earlier in the season. The main stem Klamath will close to the take of adults after Oct. 5, but you can still harvest two jacks per day.
Photo Credit: Photo courtesy of Alan Borges/Alan’s Guide Service

If you’re looking to harvest an adult Chinook salmon in the Klamath basin, the Trinity River will be your only option as of Thursday. The California Department of Fish and Wildlife determined last Friday that the recreational fall-run Chinook salmon catch will have met the Upper Klamath River adult fall-run Chinook salmon quota (of 360) below Iron Gate Dam for the 2022 season as of 11:59 p.m. on Wednesday, Oct. 5.

Except within 100 yards of the mouth (spit area), the main stem of the Klamath River will remain open for the harvest of salmon (jacks) less than or equal to 23 inches. All adult Chinook salmon caught must be immediately released and reported on an angler’s report card. The daily bag limit remains two jacks per day.

Anglers may monitor the quota status of open and closed sections of the Klamath and Trinity rivers by calling California Department of Fish and Wildlife’s fishing information hotline at (800)564-6479.

Dungeness crab testing underway
Domoic acid testing in Dungeness crabs is underway on the California coast. To date, samples from Trinidad and Half Moon Bay/San Francisco have been tested at least once. Neither of these ports tested crabs that exceed the action level of 30 parts per million. For more information, visit https://www.cdph.ca.gov/Programs/CEH/DFDCS/CDPH%20Document%20Library/FDB/FoodSafetyProgram/DomoicAcid/CrabDAResultsJulytoSeptember302022.pdf

The Oceans:
Eureka
With calm seas in the forecast for Tuesday, a small fleet of boats ran southwest in search of some late-season tuna action. Capt. Tony Sepulveda of Shellback Sport Fishing was one of the boats that set a south, southwest course. “At about 38 miles from the entrance we found 61 degree water on the northern flank of the Mendocino Ridge and started tacking west along the structure,” said Sepulveda. “There were good signs of bait over a big area with consistent jig stops on as many as four hookups at a time. We ended our day with 21 big-grade albacore between 20 and 36 pounds on a flat ocean. We also found a spot where 60- to 120-pound bluefin put on a great show, crashing bait within casting distance of the boat. But as anyone who’s spent time chasing bluefin knows, seeing and catching are very different things.” Most of the other boats landed between six and 10 fish, but they were big ones ranging from 25 to 38 pounds.

Shelter Cove
According to Jake Mitchell of Sea Hawk Sport Fishing, the tuna action slowed down last week. He said, “The warm water is still close and there seems to be fish around. It’s been tough to get the fish to bite, which is typical for this time of the year. The rockfish bite is still good, and limits have been coming pretty easily.”

Brookings
According to Andy Martin of Brookings Fishing Charters, lingcod fishing is fair out of Brookings. “Halibut fishing is good on calm weather days, said Martin. “Even though the quota for the Southern Oregon Coast has been met, ODFW has transferred unused quota from the central Oregon Coast to the Brookings and Gold Beach area, allowing halibut season to continue through Oct. 31.”

North Coast river closures
Currently, all North Coast rivers subjected to low flow fishing closures, including the Eel, Mad, Redwood Creek, Smith and Van Duzen are closed. Sections of rivers that are open include the main stem Smith River from its mouth to the mouth of Rowdy Creek. New in 2022, a low-flow angling restriction was added to the section of the Eel River from the mouth to Fulmor Road at its paved junction with the south bank of the Eel River, Sept. 1 through April 30.
The Mad River from the mouth to 200 yards upstream is closed until Jan. 1 2023. The Department of Fish and Game will make the information available to the public no later than 1 p.m. each Monday, Wednesday and Friday as to whether any river will be closed to fishing. The rivers can be opened up at any time. The low flow closure hotline for North Coast rivers is (707) 822-3164. For more information, visit https://fishingthenorthcoast.com/2021/09/22/2021-2022-low-flow-information-for-north-coast-rivers/

The Rivers:
Lower Klamath
Fishing has gotten a little tougher on the lower Klamath as the run is winding down. There are some kings still trickling in and some steelhead showed up along with some coho. The late-run kings should be making their way into the river soon, especially if we see some rain. Boat pressure has been light. The daily bag limit is two jack Chinook 23-inches or less and two hatchery steelhead.

Chetco estuary
“After a week of good fishing in the Chetco estuary, salmon fishing slowed down over the weekend before the action picked up again on Monday,” said Andy Martin of Wild Rivers Fishing “Lots of hatchery kings and wild kings so far this season. Anglers may keep one adult wild king a day on the Chetco and two per season. The daily limit is two adult kings a day, but only one wild. A few salmon are being caught in the tidewater on bobbers and sand shrimp, but the best action has been trolling anchovies along the jetties. Salmon also are biting on the Rogue Bay, with a mix of wild kings and hatchery coho.” 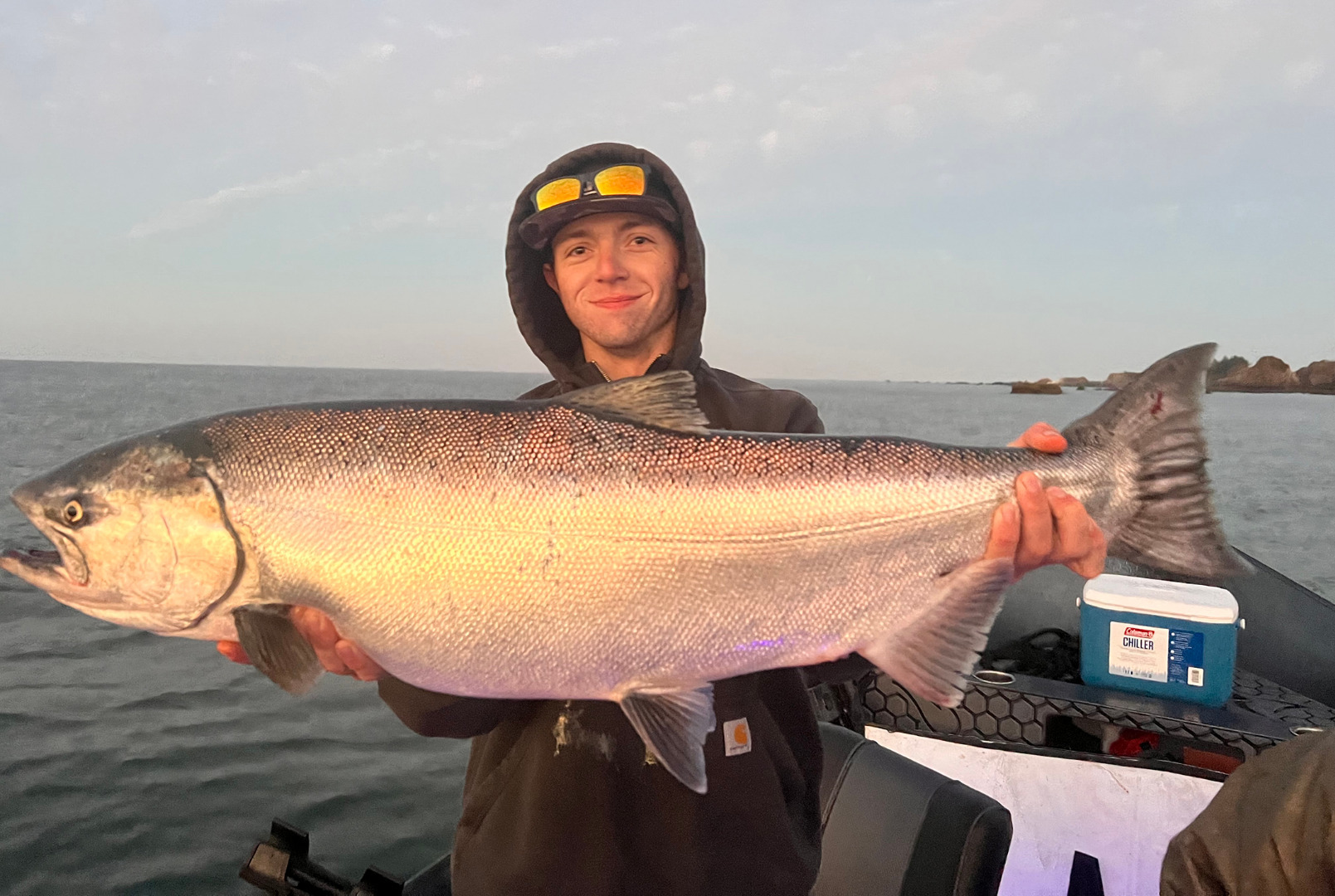 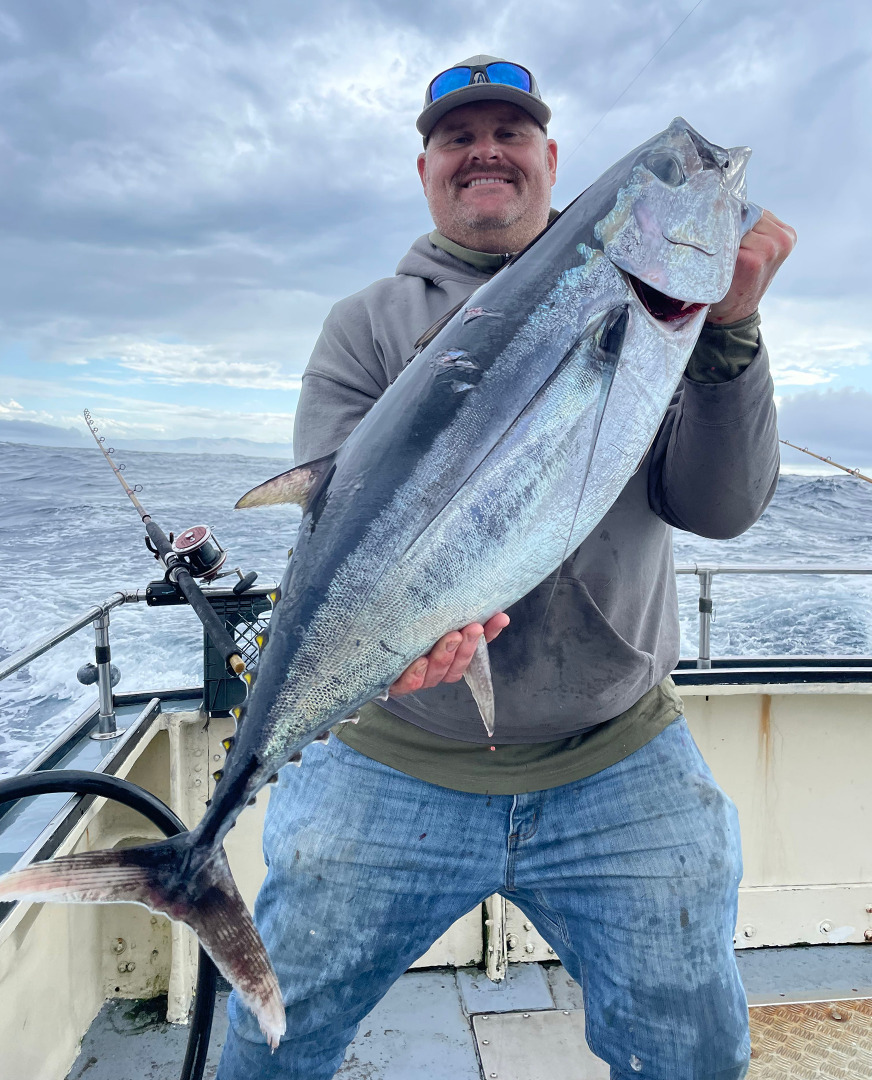