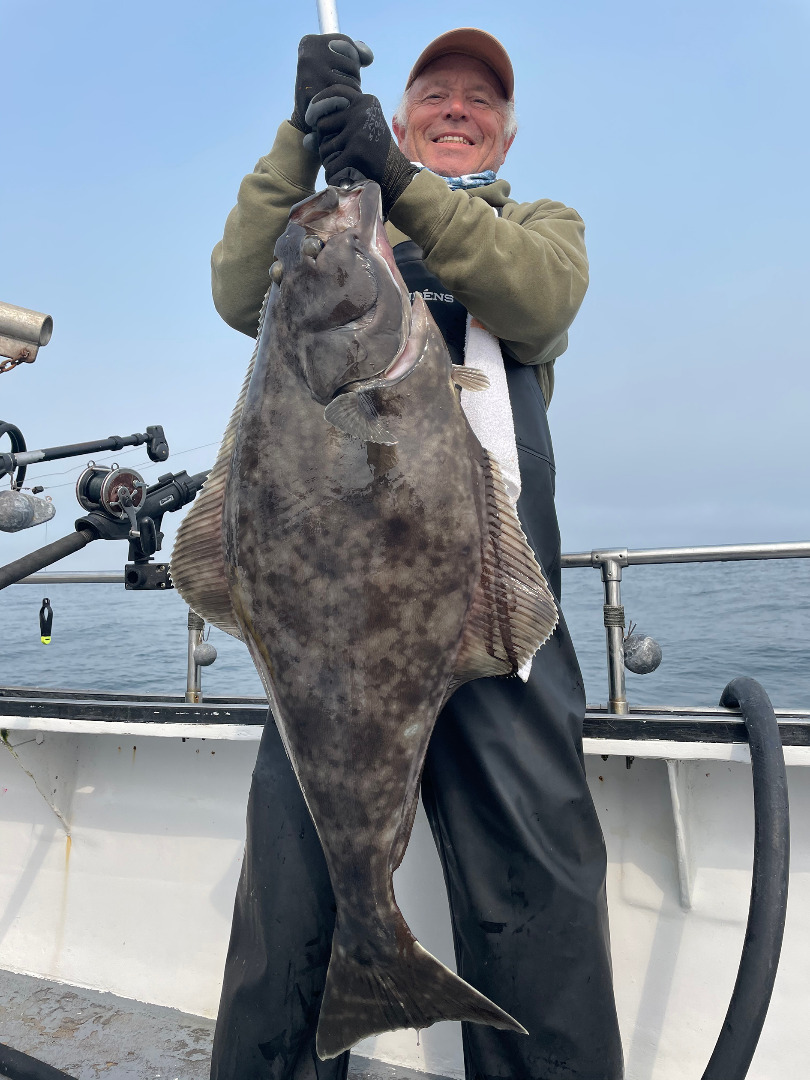 The Pacific halibut fishery reopened Sept. 3 and what a nice little shot in the arm for our local economy. You needn’t look any further than the local boat ramps as trucks and trailers were lined up as far as you could see. The charter fleet was also rejuvenated, with plenty of happy customers filling their boats over the holiday weekend. The “reopening” came after CDFW and NMFS indicated a much lower catch volume than previously projected following the June 30 closure. Can you say Christmas in September? While the boat traffic was heavy, the fishing wasn’t quite as red hot as everyone hoped. There were plenty of fish caught, including limits for some boats. The slower than anticipated bite didn’t seem to bother most anglers. Being back on the water, drifting for a tasty meal while enjoying the long holiday weekend was enough for most. Prior to the weekend, more than 20,000 pounds were left to harvest of the 39,260 quota. For more information, visit www.wildlife.ca.gov/conservation/marine/pacific-halibut#31670772-in-season-tracking.

Weekend marine forecast
Northerlies and steep seas will gradually increase through the workweek, and hold through the weekend. As of Wednesday, the forecast out 10 nautical miles for Friday is calling for winds out of the north 5 to 10 knots with northwest swells 5 feet at six seconds. Saturday looks a little worse, with winds from the north 10 to 15 knots and northwest swells 7 feet at seven seconds and northwest 4 feet at 17 seconds. Sunday the winds will be from the north 5 to 15 knots and north swells 8 feet at eight seconds and northwest 6 feet at 14 seconds. These conditions can and will change by the weekend. For an up-to-date weather forecast, visit www.weather.gov/eureka/ or www.windy.com. To monitor the latest Humboldt bar conditions, visit www.wrh.noaa.gov/eka/swan. You can also call the National Weather Service at 443-7062 or the office on Woodley Island at 443-6484.

Adult Salmon Quota met on the Lower Klamath
In a press release issued Tuesday, CDFW projected anglers will have met the Lower Klamath River adult fall Chinook salmon quota below the State Route 96 Bridge near Weitchpec for the 2021 season as of 11:59 p.m. Sept. 7.

The fishery at the mouth of the Klamath was closed as of Friday, Aug. 27 and will remain closed to all fishing for the rest of the calendar year. The rest of the lower main stem of the Klamath River below the Highway 96 Bridge at Weitchpec will remain open to the harvest of jack (two-year-old) Chinook salmon less than or equal to 23 inches. All adult Chinook salmon caught must be immediately released and reported on the angler’s report card.

The Oceans:
Eureka
With the Pacific halibut season opening back up, there was no shortage of anglers taking advantage of the calm seas over the weekend. According to Tim Klassen of Reel Steel Sport Fishing, the bite wasn’t red hot but there are plenty of fish around. “Most of the effort was just north of the entrance in 300 feet of water,” he said. “The fish ranged from 12 to 30 pounds this weekend. The ocean looks fishable through the week so we should see some better scores. Boat traffic was heavy over the holiday weekend.”

Trinidad
According to Curt Wilson, of Wind Rose Charters, there were a handful of halibut caught over the weekend. “It wasn’t wide-open but there were fish caught each day over the weekend,” he said. “We were able to boat four on Saturday with the big fish weighing roughly 40 pounds. Fish are being caught all up and down the line, from 180 all the way to 400 feet. The black rockfish action is still good but we’re still not seeing much variety.” The launch is scheduled to close Sept. 14.

Shelter Cove
The salmon bite continues to be somewhat decent, reports Jake Mitchell of Sea Hawk Sport Fishing. “Some private boats with two to three people have been getting limits, while many others have been striking out,” he said. “It seems it’s just about being patient and being in the right place at the right time. We averaged just over a fish per angler this past week. Most of the action is just south of the harbor in 20 to 60 feet of water. Rock fishing is still solid and the lingcod bite seems to be improving a little as well. No one has been halibut fishing since it reopened that I know of.”

Crescent City
Quite a few Pacific halibut were caught over the weekend, according to Britt Carson of Crescent City’s Englund Marine. He said, “The best bite was on the backside of the South Reef in 225 to 300 feet of water. The rockfish and lingcod action remains excellent, with lots of limits reported over the holiday weekend.” One boat made a 25 to 35 mile run for tuna on Saturday and reportedly boated 15.

Brookings
“Calm weather led to wide-open halibut fishing over the weekend out of Brookings,” said Andy Martin of Brookings Fishing Charters. “Boaters who put in an all-day effort fishing in 200 feet of water straight out from the harbor returned with limits of halibut from 10 to 40 pounds. Combinations of squid, herring and salmon carcasses are working best. Lingcod fishing has improved, especially on calm-weather days in 40 to 60 feet of water. Ocean salmon season is closed.

The Rivers:
Lower Klamath
The salmon bite was red-hot over the weekend even with the increase in flows. The river is full of jacks and quite a few adult kings are mixed in. Fish are being caught side-drifting the riffles and dragging bait through the deeper holes. The adult quota was met Sept. 7. The daily bag limit is two Chinook less than or equal to 23 inches. For more information, visit www.wildlife.ca.gov/News/lower-klamath-river-adult-fall-run-chinook-salmon-quota-met.

Chetco/Lower Rogue
Salmon fishing busted open over the weekend in the Chetco estuary according to Martin. “A dozen or more kings a day are being caught along the jetties, with more adult salmon showing in the catch than jacks,” he said. “The second half of the incoming tide is best. Drift boat fishing upriver won’t begin until there are significant fall rains. Salmon fishing has been hit-and-miss on the Rogue Bay, with good fishing over the weekend and slow action on Monday.”

Kings Make a Strong Showing on the Klamath 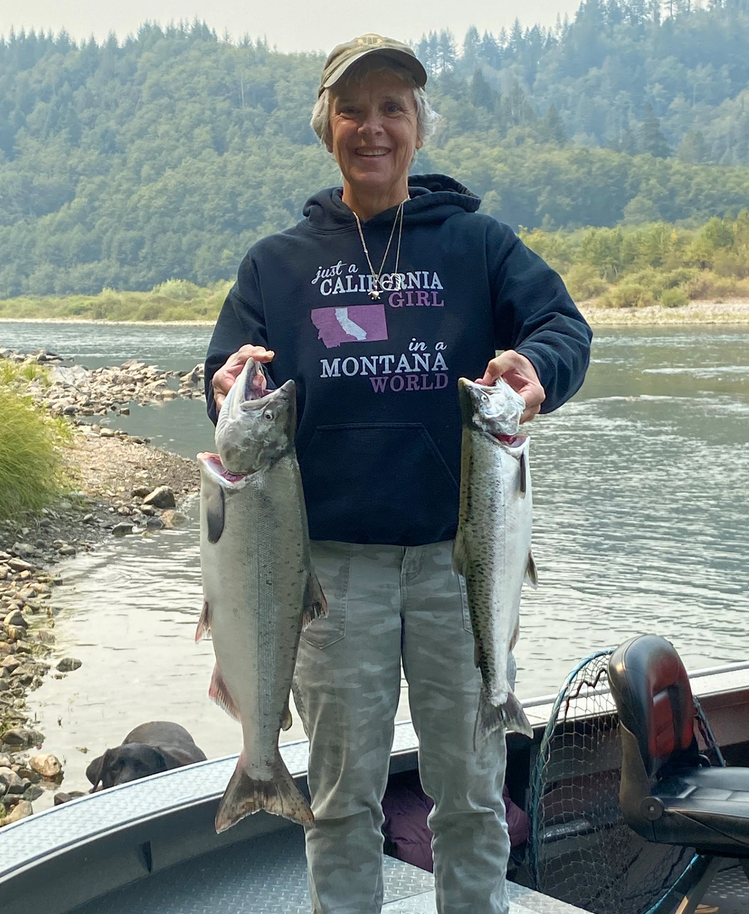 9-2-2021
Early last week, we were waiting patiently for the fall run of king salmon to begin their migration upriver. Well,...... Read More 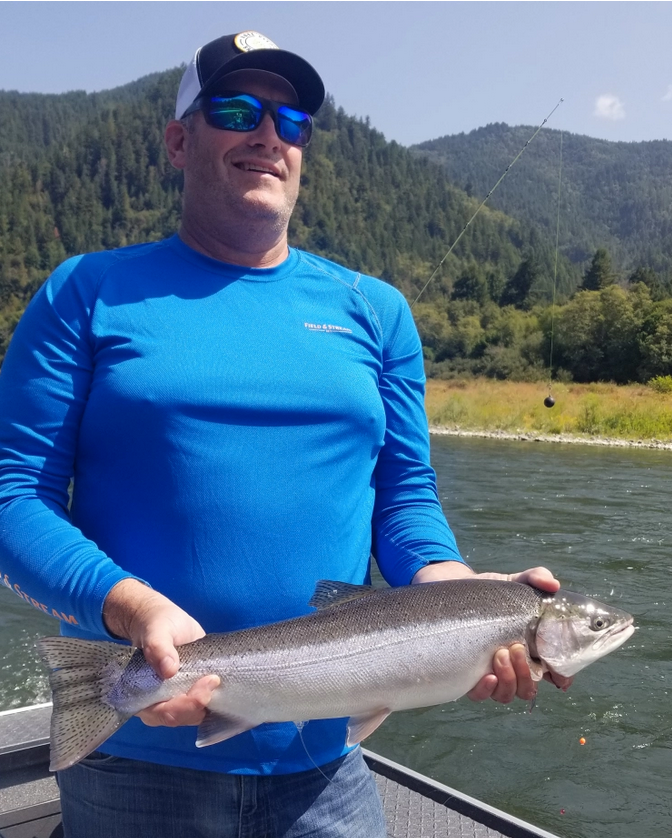 8-26-2021
Some of the best steelhead fishing in recent years on the Klamath has kept anglers busy as we await the...... Read More