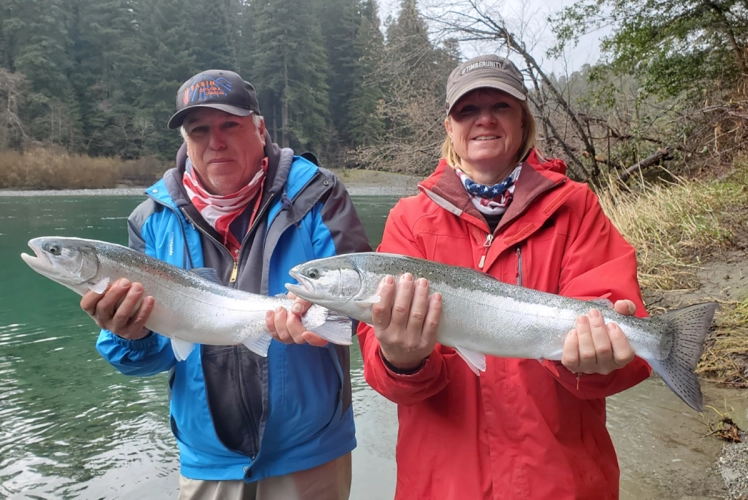 As we move toward the end of the winter steelhead season on the coast, river conditions are shaping up nicely for the weekend. All the rivers, except for the main Eel, should be some shade of green. The catching, on the other hand, may be a different story. It’s been a struggle all year as the steelhead seemed in short supply. Whether the lack of fish can be attributed to the previous drought is hard to say. Whatever the reason, I sure hope it’s short lived. And speaking of conditions, the rain and snow that fell over the past week has been a blessing. The late-season rains may not bring much joy to anglers but they’re a godsend for the fish. The extra water will go a long way in helping the steelhead reach their spawning grounds and also provide a helping hand for the juvenile salmonids as they begin their journey down to the saltwater.

The weather ahead
“Following a fairly wet Tuesday and Wednesday, we’ll finally start to dry out on Thursday,” said Kathleen Zontos of Eureka’s National Weather Service Office. “No rain is in the forecast Thursday through Sunday, so we should start to see the rivers recede. There are a few chances for rain next week that could impact the rivers. There is a chance of rain Monday but it’s not certain. Some models are showing up to 1 inch falling in Del Norte and up to a ½ inch falling in Humboldt. The next chance is for next Thursday and Friday, but there’s also some uncertainty about this system,” said Zontos.

Brookings ocean report
“Calm weather is expected the second half of this week, good news for saltwater anglers,” said Andy Martin with Brookings Fishing Charters. “Lingcod and rockfish action has been good out of Brookings when the wind and swells settle down. The best fishing has been in the Bird Island to House Rock area. Surfperch fishing also has been very good from Brookings-area beaches, especially at Crissy Field and Lone Ranch state parks. There is a nice mix of striped and redtail surfperch.”

The Rivers:
Smith River
The Smith hit 10-feet on the Jed Smith gauge Saturday morning, and was in really good shape the past few days. According to guide Mike Coopman, the fishing is still pretty tough. He said, “We had a really good day after the rise but since then it’s been pretty tough. There are a few around though. We haven’t seen any downers yet, but that will probably change after the next rise. We should also see more fresh fish enter the river.”

Chetco/Rogue
The crowds have left the Chetco, leaving decent fishing for the few guides still working it, according to Martin. “Most of the steelhead are downrunners but a few bright fish also are being caught,” said Martin. “Most of the fresh steelhead are less than 5 pounds. Some of the downrunners have been in the mid-teens. Rogue River anglers are still waiting for the first spring salmon of the year. There have been a few unconfirmed reports of springers but no photos and no fish weighed in at Rogue Outdoor Store or Jot’s. Steelhead fishing is fair, with the best fishing near Agness. Fishing has been slow on the Elk and Sixes.”

Eel River (main stem)
The main Eel has been in fishable shape since Sunday but that was changing Tuesday. Flows were predicted to reach 7,600 cubic feet per second Thursday morning. Dry weather beginning Thursday, will keep it on the drop through the weekend, but another rise is forecast for Monday. It may fish on the weekend. Boats drifting early last week from the forks down were getting two to four fish per trip.

Eel River (South Fork)
The South Fork was dirty Saturday but quickly turned green by Sunday. The rain falling Tuesday and Wednesday are predicted to blow the river out, but it will be on the drop by Thursday. Conditions look excellent for the weekend, but another rise is predicted for Monday.

Van Duzen
Like the Eel, the Van Duzen was dirty Saturday, but quickly cleared and was fishable through Monday. It was on a steep rise as of Tuesday, but only topped out at 1,000 cfs by nightfall. With dry weather predicted by Thursday, it could drop down into fishable shape by late in the weekend. Another rise is predicted for Monday, so the fishable window could be small.

Mad River
According to Justin Kelly of RMI Outdoors, the river never really blew out as predicted on Saturday. “The river looked really good above the North Fork over the weekend,” said Kelly. “With the cold temperatures, I think we got a lot more snow in the hills than rain. The fishing was decent over the weekend — there seems to be a few more fish around now. We’re starting to see some downers but there are still fresh ones to be had. A couple small rises are predicted for this week but there’s a good chance the water will be green by the weekend.” Another bump in flows is predicted for Sunday night that will likely turn the river muddy. 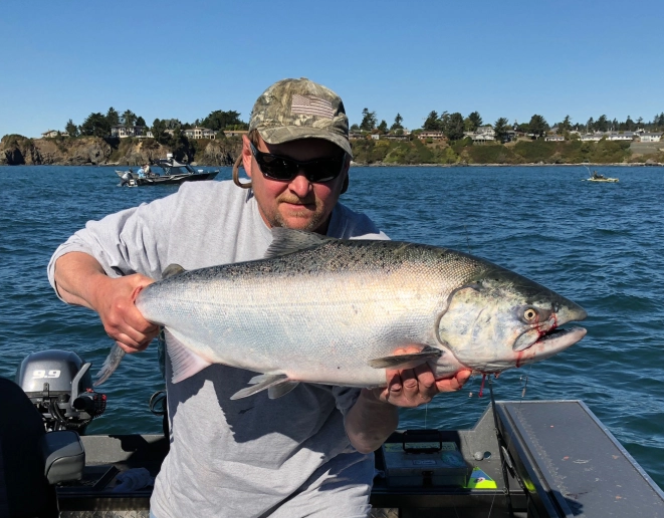 3-4-2021
The news wasn’t pretty at Thursday’s annual Ocean Salmon Information meeting. Not only are the Klamath salmon stocks struggling, the...... Read More 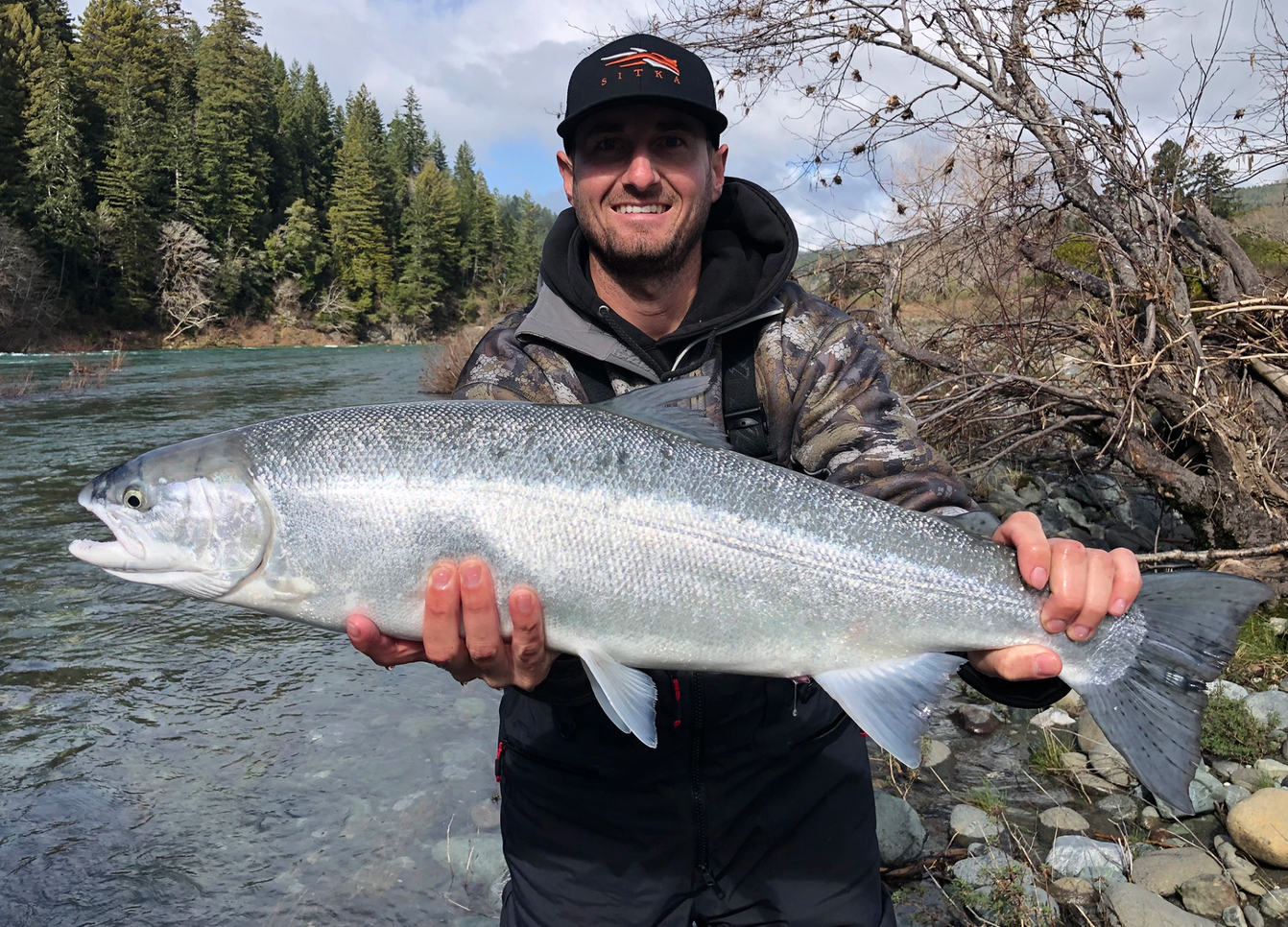 2-25-2021
Rivers conditions are trending toward perfection this week and it’s pretty much now or never for the 2021 winter steelhead...... Read More