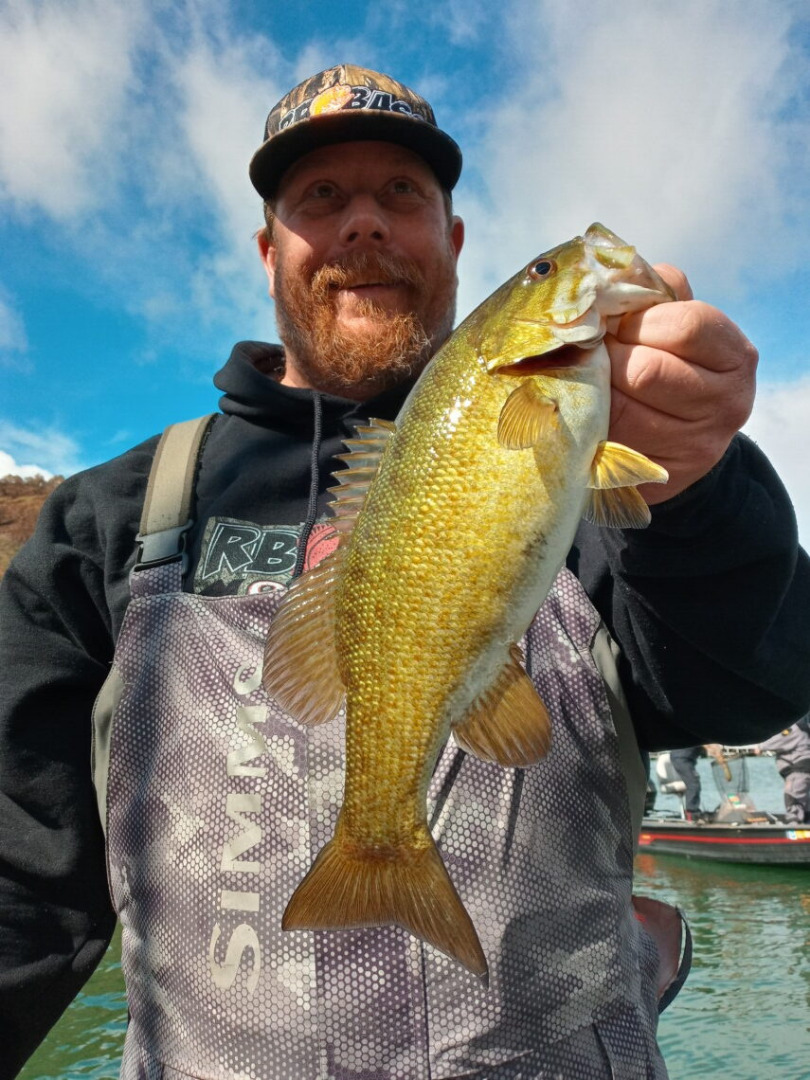 Today I had the opportunity to go fishing with my RB Bass brother Rob Clarke. We launched from Markley Cove. We got on the water between 6:45 and 7 am. Our first stop wasn’t a long run maybe 5 mins. We started off throwing A rigs around a point and into a belly of a cut with no success. Also tried throwing an underspin, jigs, and crankbaits. No luck with those either so we decided it was time to move.

Venturing out onto the main lake we pulled into a cut that had some timber in the water. We started throwing spinnerbaits. I was throwing a white and chartreuse Dobyns spinnerbait on my Dobyns championship DC 765 CB. My second cast I threw up into about 4 ft of water bringing it thru trees and got slammed by my first fish of the day. It was a largemouth that weighed 1.98 pounds. We kept fishing that area for a little while longer but no more fish to be had.

We made another move into skiers cove. Hitting some points that had rock on them. We were throwing A rigs, jigs, crankbaits and some dropshot still not having any luck. We had marked some fish out deeper but couldn’t get them to bite either. It was now around 1:30 so we headed back into the narrows.

Pulling up to our last spot of the day I instantly hooked up on a nice smallmouth. I was using my Dobyns FR 702 SF dropshotting a 3 inch Keitech easy shiner. A couple more cast and I stuck a nice 2.79 pound spotted bass.

While there we ran into RB Bass angler Richard Witham and buddy Eric Jeffrey. They had caught around 20 fish. Richard was throwing a Dobyns 795 sb rod. He was using Rob Clarkes A rig paired up with Dobyns swimbait heads and 3.8 Keitechs in the bluegill flash color. He would let it hit the bottom and start a slow to medium speed retrieve. Their biggest fish were a 3.51 largemouth and a 3.38 largemouth.

Rob started catching some nice fish on his A rig kind of up in the water a little bit. I caught a few more fish on a 4 inch strike king flutter spoon and the dropshot.

We ended our day with our last stop being the hot spot for us. We found our fish in 15 – 20 ft deep around bait as did Richard and Eric. All in all it was a good day on the water. Again top baits were the A rig and a dropshot with a few other fish on a spoon. We ended up catching 10 or 11 fish. Hope this info helps you guys out on your next trip to Lake Berryessa. Till next time tight lines and get out there and rip some lips. 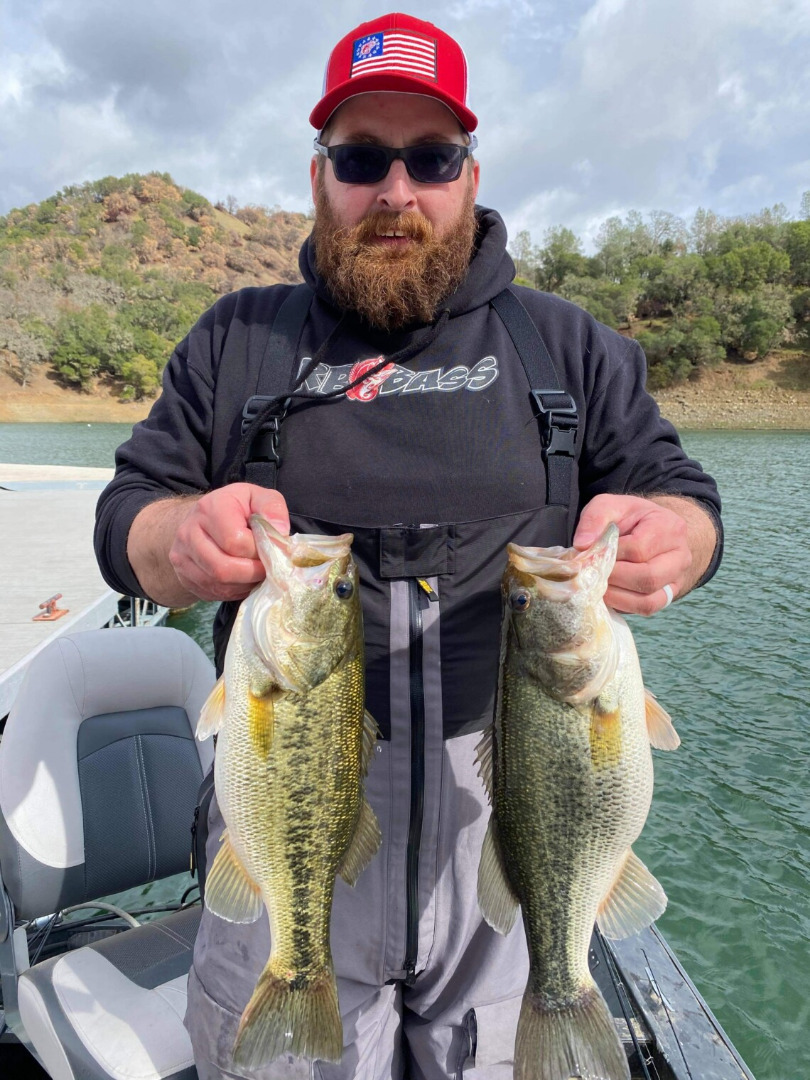 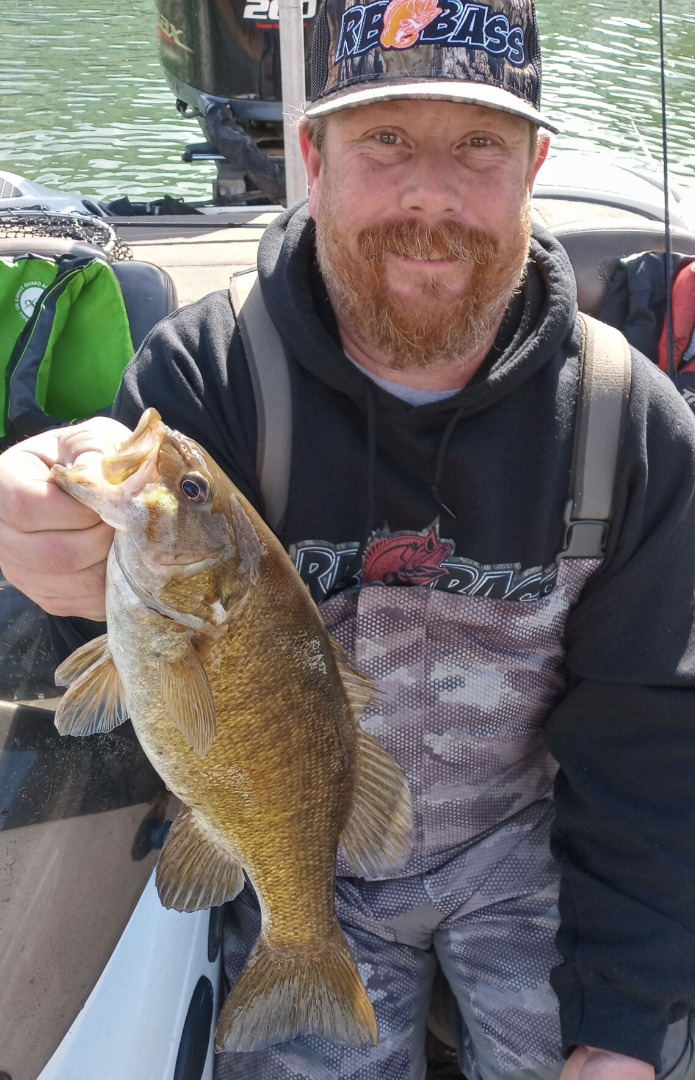 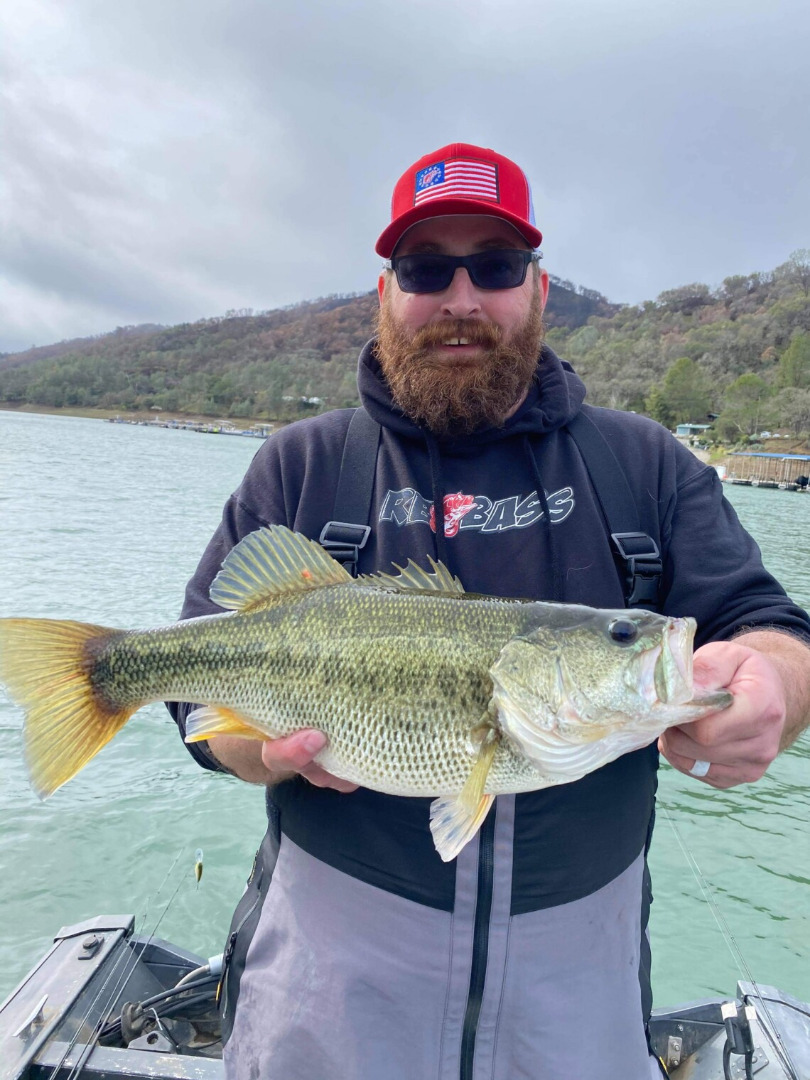 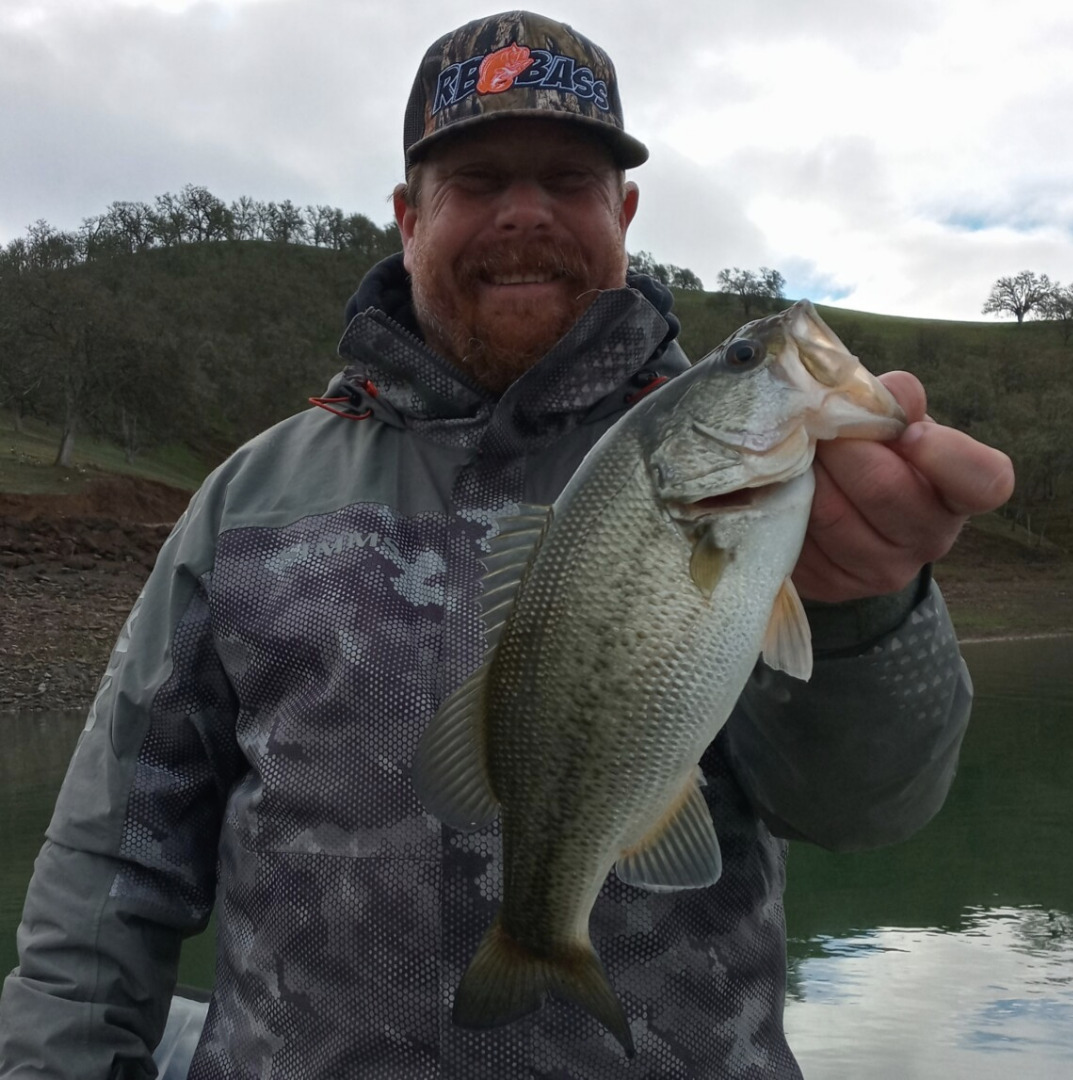 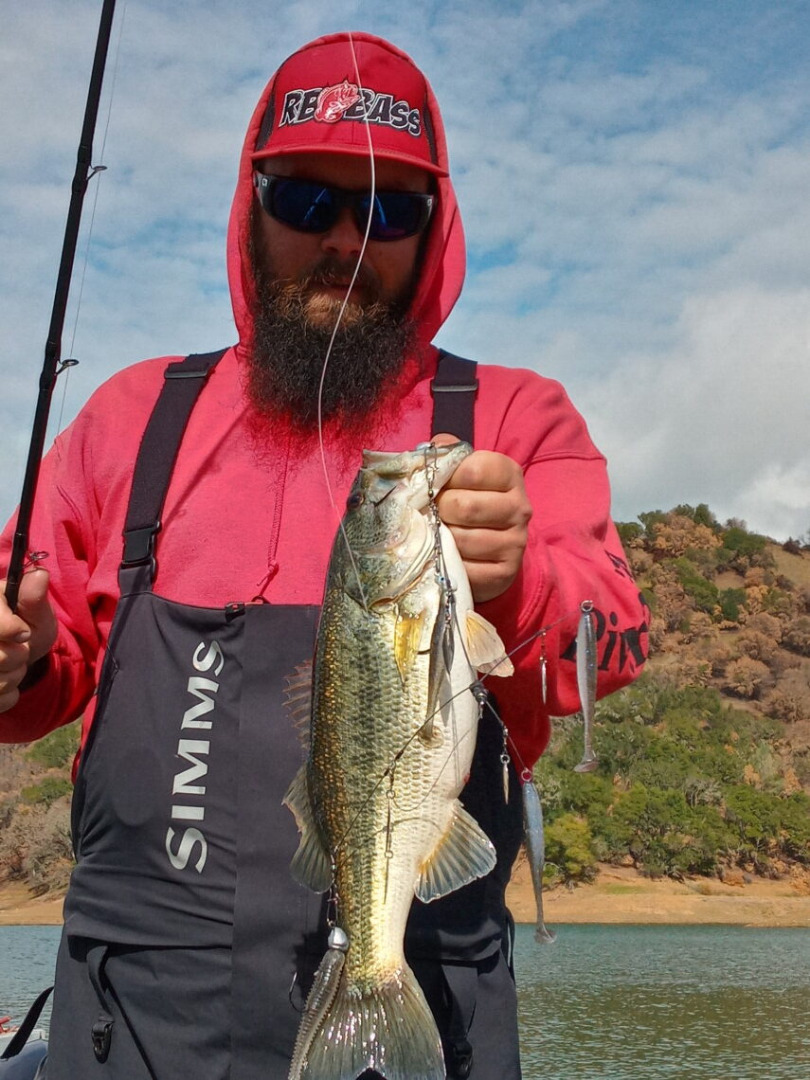 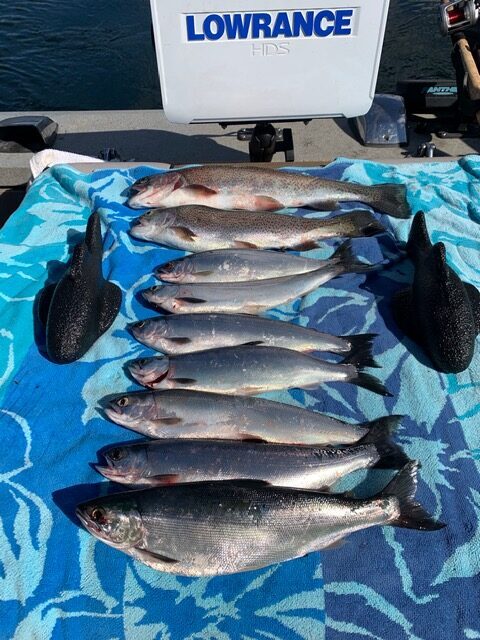 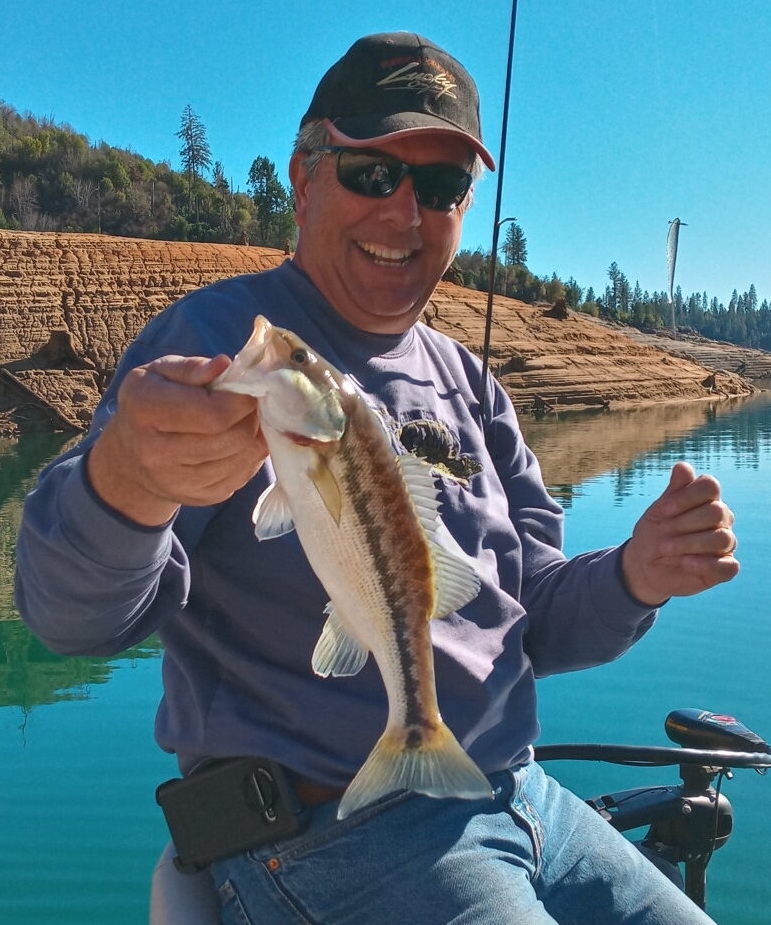