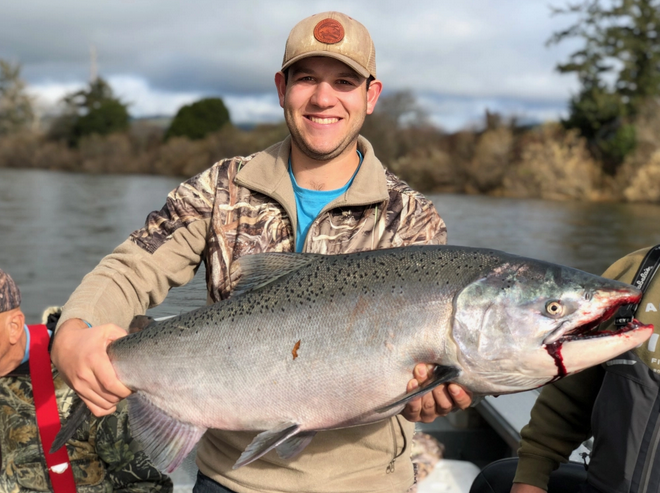 Scott Richardson of Cloverdale caught this king salmon while fishing the Smith River last fall. With rain in the forecast, some of the coastal rivers could open to fishing this weekend, including the Smith.
Photo Credit: Courtesy of Photo courtesy of Mike Coopman’s Guide Service

As the fall salmon season begins to wind down on the Klamath River, salmon anglers will no doubt turn their attention to the late-fall coastal salmon runs. The Smith, Chetco and Eel rivers will take center stage for the next couple months. That is if we get some timely rain. The last few years, consistently targeting kings on any of these rivers was virtually impossible. The rains that used to kick off the runs in September and October failed to materialize. By the time the rains arrived in late November and December, the salmon had no choice but to swim full speed toward spawning grounds. Historically, storms begin to line up offshore in early fall, bringing with them the first flow increases of the year. This signaled the first wave of salmon to move out of the estuaries and begin their migration up river. Then the next storm arrives and we repeat the cycle, pushing the older fish further upriver and bringing in new fish from the salt. It’s a salmon conga line, if you will, resulting in a river with salmon from top to bottom — ideal conditions for fishermen. That’s the way it once was and what we’re all hoping for again.

The salmon are staging in the estuaries of the rain-dependent coastal rivers and the one wildcard is the weather. But a change in our weather pattern is forthcoming. “It looks like we’ll start to see some light rain on Thursday evening,” said Kathleen Zontos of Eureka’s National Weather Service. “The rain will continue through Friday, then we’ll see some heavier precipitation on Saturday. In the Smith basin, we could see 2 to 3 inches over the course of this storm, with 3/4 to an inch and a half falling on Saturday. It looks like showers could linger through Sunday. The storm timeline will be similar in the Eel basin but with lower totals,” she said. “The upper Eel may see up to one inch, with the lower section getting 1 to 2 inches. Additional rain is predicted for later in the week but right now it doesn’t look significant.” Looking ahead, the National Weather Service forecasts a chance for above normal precipitation for the week of Oct. 13-19.

For anglers looking to hit the rivers this weekend, the Smith may open to fishing either Saturday or Sunday. Call the low flow closure hotline for North Coast rivers at (707) 822-3164 before you make any plans.

As of Wednesday morning, all North Coast rivers subjected to low-flow fishing closures, including the Eel, Mad, Redwood Creek, Smith and Van Duzen, are closed. Open river sections include the main stem Eel River from the paved junction of Fulmor Road to its mouth, the main stem Mad River from the Hammond Trail Railroad Trestle to its mouth and the main stem Smith River from the mouth of Rowdy Creek to its mouth. The department makes updated closure information available by recorded message by 1 p.m. Mondays, Wednesdays, and Fridays. It’s the responsibility of anglers to call the number designated in the sport fishing regulations booklet and check the status of any river.

Dungeness crab testing underway
According to Christy Juhasz, an Environmental Scientist with CDFW Marine Region, the Domoic Acid test results for Trinidad should be posted this week. “The Eureka samples came into the California Dept. of Public Health (CDPH) lab late last week for the remaining Humboldt County tests,” said Juhasz. “Samples from other North Coast sites of PA/Manchester Beach, Fort Bragg/Usal and Crescent City are expected to come in early next week and that should conclude remaining northern CA sites. It takes about one to one and a half weeks for test results to be posted.” For more information regarding recreational Dungeness crab fishing regulations and other crab species, visit the DFG Marine Region website at www.wildlife.ca.gov/Conservation/Marine/Invertebrates/Crabs. For health advisories, visit www.wildlife.ca.gov/Fishing/Ocean/Health-Advisories.

Weekend marine forecast
Light winds and low seas will last through Friday. As a cold front approaches, winds will become southerly on Friday into Saturday. A northwest swell will result in building seas later in the weekend. As of Wednesday afternoon, Friday’s forecast is calling for winds out of the S up to 5 knots with NW swells 3 feet at 10 seconds. Saturday winds will be out of the W 10 to 15 knots with SW swells 4 feet at 5 seconds and NW 6 feet at 16 seconds. Sunday the winds will be from the N 5 to 10 knots, with NW swells 9 feet at 13 seconds. These conditions can and will change by the weekend. For an up-to-date weather forecast, visit www.weather.gov/eureka/ or https://www.windy.com. To monitor the latest Humboldt bar conditions, visit www.wrh.noaa.gov/eka/swan. You can also call the National Weather Service at (707) 443-7062 or the office on Woodley Island at (707) 443-6484.

Low-Energy Geophysical Survey occurring offshore of Eureka
Cardinal Point Captains, Inc. will be conducting a low-energy geophysical survey offshore of Eureka from Nov. 1-11. The proposed survey area includes both state waters and federal waters and operations will be conducted 24-hrs a day. M/V Surveyor will be limited in her ability to maneuver during operations and other vessels should maintain a distance of at least 500 meters from the operations, and contact the ship via VHF-FM channel 16. For more information or any potential conflicts, please contact Pasquale De Rosa at (714) 595-1689.

The Oceans:
Eureka
The offshore season is starting to wind down out of Eureka. There are still a couple charters running trips, but not every day. Most of the boats have been targeting rockfish at Cape Mendocino. Tim Klassen of Reel Steel Sport Fishing was there on Tuesday and reports the fish were snapping pretty good. “The conditions were just about perfect,” said Klassen. “We caught a nice variety of rockfish, and there were some really nice lingcod around. Conditions look good through the rest of the week before we see some bigger swells over the weekend. The tuna water is still within reach – it’s about 25 miles to 61-degree water and 35 miles to 65-degree water. The water just on the north of Trinidad looks really good, I’m sure a few boats will check it out.”

The California halibut bite is still going strong in the bay. There isn’t much bait around, but the boats out there every day are catching limits or close to it tossing swim baits. There’s been quite a few caught recently in the south bay near King Salmon.

Shelter Cove
With salmon and tuna not being a viable option, Jake Mitchell of Sea Hawk Sport Fishing has been spending his days chasing rockfish. “We fished one day at the Ranch House, a few days around the Hat, and a few days up at Rodgers Break,” said Mitchell. “The story has been pretty much the same everywhere. The rockfish have been biting really well, but the lingcod have been a little more stubborn. We’ve gotten limits just about every day, but we really have to move around a lot. Once we do find them, we beat that spot up.”

Brookings
Fishing for Pacific halibut remains good out of Brookings according to Andy Martin of Brookings Fishing Charters. He said, “Fishing is fair for lingcod and good for rockfish. Crabbing also has been good. Rough weather is expected for the weekend. Tuna were caught last week, but choppy seas kept boats in close this week.”

The Rivers:
Lower Klamath
Salmon fishing was tough over the weekend. The fish that were in the lower river either moved up or were off the bite. There were some nice adults still being caught this week however, so fresh kings are still making their way in. The rain coming Saturday will likely bring in some new fish, but they’ll be moving quickly as it’s getting late. There are some silvers in the lower river along with a few steelhead. Boat pressure has tailed off. As a reminder, the lower river quota has been met and salmon over 23 inches must be released.

Lower Chetco/Rogue
Big numbers of salmon are staging in the Chetco estuary, waiting for rain to head upriver reports Martin. “That could happen this weekend, as flows are expected to spike Saturday and Sunday,” said Martin. “Lots of jacks and adults to 35 pounds are being caught on plug-cut herring and anchovies fished behind Fish Flash flashers. The limit is one adult king a day, and many anglers are getting their fish early each day. The Rogue Bay also is still fishing well, with kings and Coho in the mix. Expect this weekend’s rain to slow fishing there.” 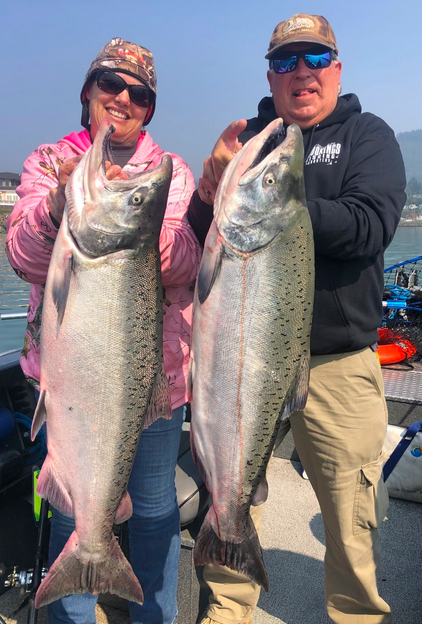 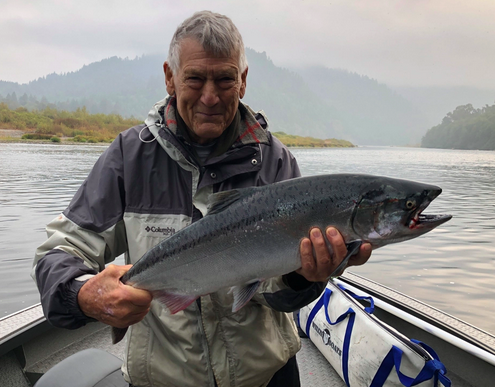 10-1-2020
Since just after Labor Day weekend, the Klamath River has been king salmon central. The rivers been plugged with jacks...... Read More 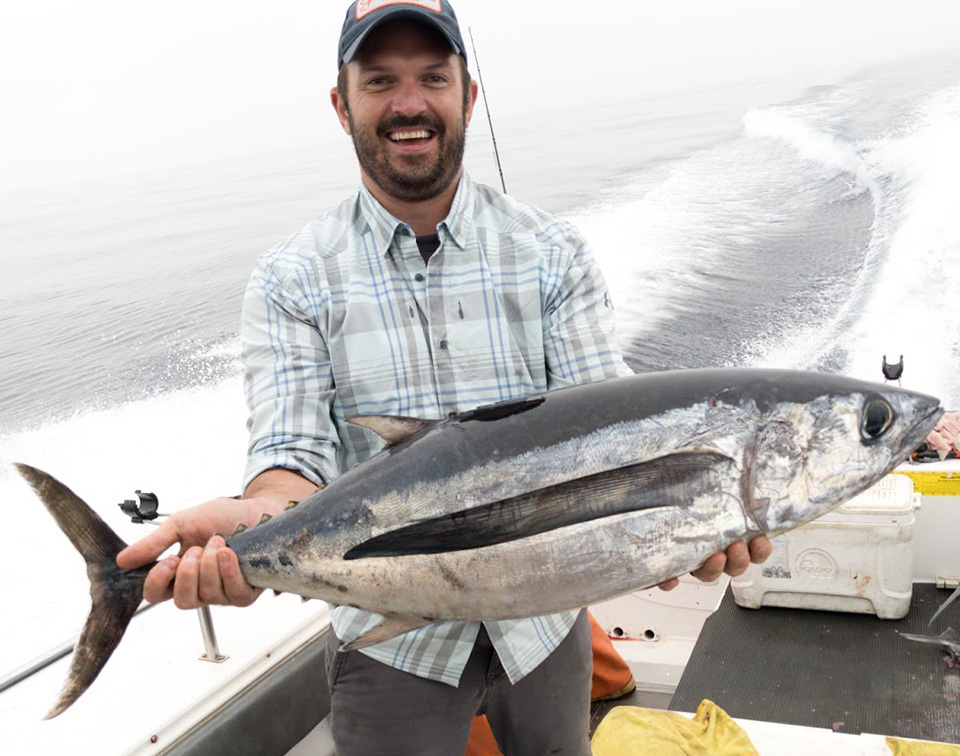