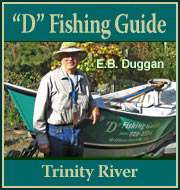 We are still seeing a smoky haze sometimes in the afternoon from the Red/Salmon fire but not every day. The hazy days has kind of has been a blessing as it helps keep the sun shadowed and a bit cooler in the afternoons.

Still haven’t verified the Hoopa weir yet but it appears that it is going in after the Holiday Weekend. I was hoping that they might hold off to try and help get a good return to the hatchery so we might start getting a regular return of salmon and steelhead.

The Willow Creek weir is having to change its location but it looks as though it will be going in upstream from Kimtu Beach. At least the Trinity will get a count of Fall Run Chinook for this year. This is vital to the over all return of salmon and steelhead to see what our next years quotas will be. I hope this will change in the future because it is a vital count for the estimated Klamath Basin fish returns.

The Willow Creek weir hopefully will be installed sometime after the Holliday Weekend.

Fishing: Fishing has been kind of slow in the Willow Creek area but some what better in the upper part of the river. Kyle Catanese (sorry last week I made a typo and put in to many Ns) fished the upper sections twice last week. Wednesday, he fished the Lewiston run and caught and released 4 jack salmon and 2 adults on spinners. The adults were nice and bright so that says that the Fall Run has started, a little late but they are in the river. Saturday, he fished the Del Loma run and caught and released 3 nice steelhead. One which was 12lbs. That was caught by Jake Coronzos, boy was he a happy fisherman. It looks like the best fishing for right now is in the early mornings, so best be up and out there as close to day light because after the sun raises it will be some hard fishing. For next week especially you want to be heading back to camp by noon as it is going to be hot (triple digit) this coming weekend.

Don’t forget fishing will close in the Falls area Aug. 31st sundown from the bridge at Hawkins Bar up to the Bridge at Cedar Flat on Hwy. 299.

Mid-Klamath to Happy Camp: The Klamath River at Weitchpec is flowing @ 2,900cfs. an increase of 1,300cfs from the last week. Iron Gate Dam is releasing 1,663cfs as of this morning. Fishing from I-5 to the Dam should really be great for steelhead and trout right now with the good water releases. I would expect it to be an early morning fish with the expected triple digit weather coming to the valley this weekend.

Trinity Lake: The lake is 66ft below the overflow (an increase of 2ft) and 62% of capacity (a decrease of 1%) with  inflows of N/A cfs and releasing N/Acfs into Lewiston Lake with N/A cfs being diverted to Whiskeytown Lake and on to Keswick Power Plant, which is releasing N/A cfs into the Sacramento River.

Temperatures in the Valley last week had a high of 98 and a low of 55 degrees. Rain for the week was 0.00in with a water year to date of 42.47 inches, with snow in Willow Creek of 1.45in. Forecasts for next week are for several more days of triple digits with highs of 104 and lows of 65. The temperatures for next weekend are expected to reach into triple digits. With high temperatures of 104 please remember and be sure to stay well hydrated and be sure to have lots sun screen. 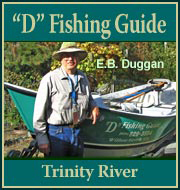 FISHING IN THE HEAT 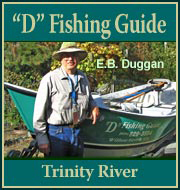