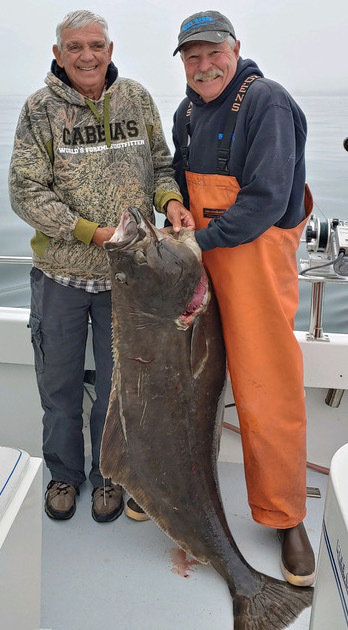 Death, taxes – and Pacific halibut? That’s what it’s starting to feel like as the wide-open halibut bite continues out of Eureka. Since mid-June, the fishing has been unstoppable. And it’s showing no signs of slowing down. In years past when the salmon were thick, boats would spend an hour or two loading the boats with kings and then head to the halibut grounds to see if they could get one or maybe two for the boat. This year, it’s been the polar opposite. Boats are making a beeline for 300 feet of water, spending all of an hour reeling in limits of halibut, and then trying to scratch out a few salmon. You have to take what the sea provides, and right now it’s a steady stream of Pacific halibut. As it’s been since the opener, the fish are mostly on the small side. But we are finally starting to see more and more in the 40 to 60-pound range. With salmon season coming to a close after this weekend, you can bet some of that effort will shift towards halibut. If the last few weeks are any indication, there should be plenty to go around.

Pacific Halibut quota update
The CDFW has projected 14,760 net pounds of Pacific Halibut has been harvested through July. In 2020, the Pacific halibut allocation for California is 39,000 pounds. To view the latest catch projection information, visit https://wildlife.ca.gov/conservation/marine/pacific-halibut#31670772-in-season-tracking

Weekend marine forecast
It’s looking like it could be a windy final weekend to the salmon season. Out 10 nautical miles from Pt. St. George to Cape Mendocino, Friday’s forecast is calling for N winds 10 to 20 knots and NW waves 6 feet at 7 seconds. Saturday is calling for N winds 10 to 20 knots and waves out of the NW 8 feet at 10 seconds. Sunday is looking similar, with winds out of the N 10 to 15 knots and waves 7 feet at 9 seconds and NW 5 feet at 14 seconds. These conditions can and will change by the weekend. For an up-to-date weather forecast, visit www.weather.gov/eureka/ or https://www.windy.com. To monitor the latest Humboldt bar conditions, visit www.wrh.noaa.gov/eka/swan. You can also call the National Weather Service at (707) 443-7062 or the office on Woodley Island at (707) 443-6484.

The Oceans:
Eureka
Salmon fishing out of Eureka hasn’t been great this week reports Tim Klassen of Reel Steel Sport Fishing. “The fish are scattered all over the place, and I don’t think there’s huge schools around,” said Klassen. “I did hear of a decent bite north around the Mad River area earlier in the week, but it’s been pretty inconsistent. Conditions have been excellent out front of the entrance – we’ve had tons of bait and piles of birds, but the salmon were nowhere to be found. Guys who are really grinding it out all day are getting a few each. The Pacific halibut bite on the other hand, hasn’t slowed down a bit. Most of the action this week was around the 51-line between 280 to 320 feet of water. Most of the fish are still in the 10 to 20-pound range, but we are starting to see more bigger fish caught.” Last weeks calm ocean conditions and the warm water within reach allowed for a few boats to target albacore. A handful of boats ran 55 to 60 miles on Thursday and most scored over twenty albies. A couple boats made a shorter run on Friday and boated numbers in the high teens.

Trinidad
The rockfish and ling cod are really on the bite reports Curt Wilson of Wind Rose Charters. He said, “There’s a wide variety of rockfish around, including lots of blues. We’ve been targeting the spots between the Head and Patrick’s Point. We had a pretty decent salmon bite up until Wednesday when it dried up. Most of the action was south of Trinidad. Guys who put in the effort were getting a fish per rod. There are a few halibut being caught, but it’s not as good as Eureka.”

Crescent City
The rockfish bite really took off this week reports Chris Hegnes of Crescent City’s Englund Marine. “The bite has been excellent, with quick limits of both rockfish and lingcod coming off the South Reef. The salmon bite was decent last week, but slowed on Sunday. Most of the effort was outside of the South Reed on a 240 heading. A couple of Thresher sharks were caught this week along South Beach. The California halibut have also showed up in better numbers, with most of the anglers targeting them getting one or two per trip,” Hegnes said.

Shelter Cove
The salmon bite has been pretty slow this week according to Captain Jake Mitchell of Sea Hawk Sport Fishing.  He said, “The average is about a half a fish per angler right inside the whistle. A small fleet of commercial boats showed up for the opener, but left after the first day as they weren’t able to find anything either. The rockfish bite was really good. I made it up to Gorda one day and had limits for the boat in two drifts. We also did a couple days down around the Hat and it was pretty good as well. I’ve spent a little time fishing for California halibut and we’re getting about a fish per person fishing around the moorings for a couple hours effort.”

Brookings
Salmon fishing is fair out of Brookings, with the best action five to seven miles out in 300 feet of water reports Andy Martin of Brookings Fishing Charters. “The kings are deep, 120 to 170 feet on the wire,” said Martin. “The season closes Friday. Fishing has been surprisingly good for Pacific halibut. The fish are small, around 15 pounds with an occasional 40- to 60-pounder, but anglers are consistently getting fish in 200 feet of water straight out from Bird Island. Lingcod and rockfish action is good.”

The Rivers:
Lower Klamath
The salmon action in the estuary continues to be hit and miss, with a handful of fresh kings being caught daily on the high tide. The warm water in the estuary is forcing the kings to stay close to the mouth and in the colder salt water, and that’s where most of the fish are being caught. Trolling anchovies behind a Rogue River spinner bait is catching the majority of the fish.
Spring-run regulations are in effect through August 14, with a daily bag and possession limit of one salmon of any size.

Lower Rogue
The Rogue Bay is improving but still only fair at best according to Martin. “Morning minus tides have made fishing slow in the morning, but there has been a decent bite on the afternoon outgoing tide. Around 25 total fish a day are being caught for 60-plus boats,” added Martin.

Find "Fishing the North Coast" on Facebook and fishingthenorthcoast.com for up-to-date fishing reports and North Coast river information. Questions, comments and photos can be emailed to [email protected]. 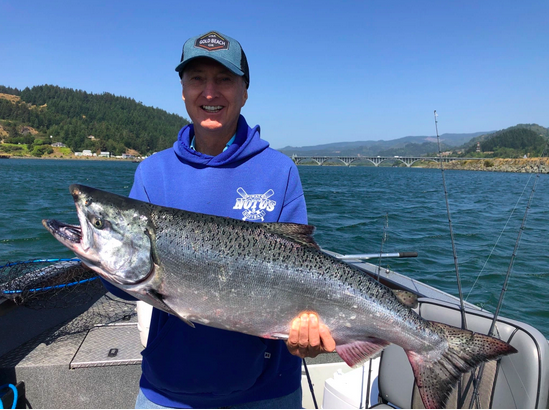 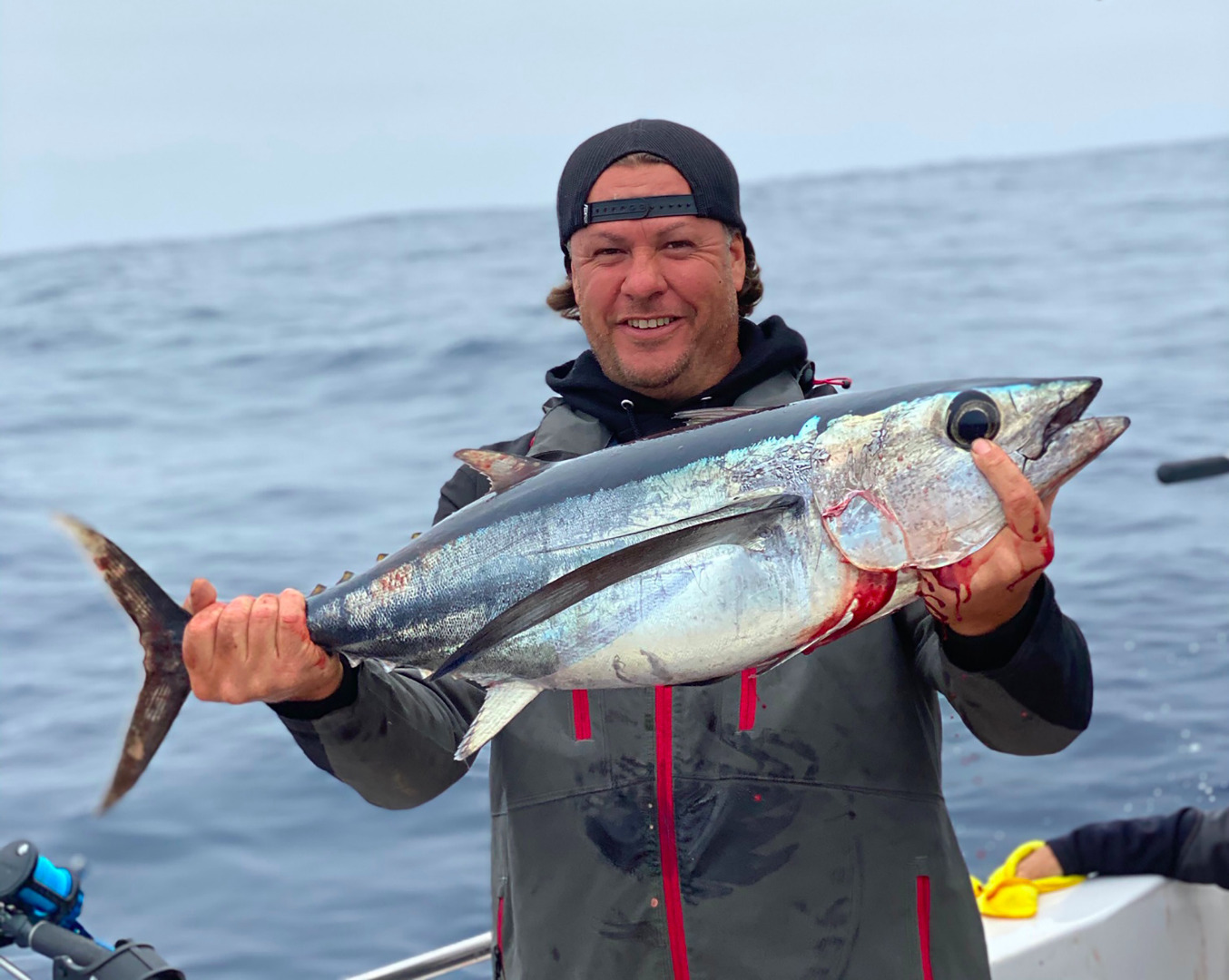 7-30-2020
The warm tuna water came within reach of the Shelter Cove fleet, and anglers jumped at the chance to bring...... Read More

Ocean Kings on The Move 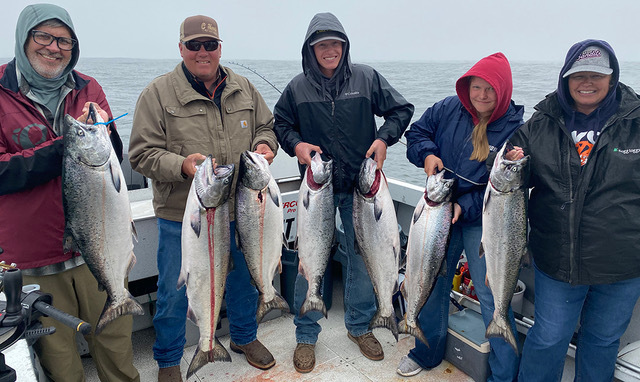 7-23-2020
So much for the kings being right where we left them after last week’s wind-a-thon. After working over some big...... Read More