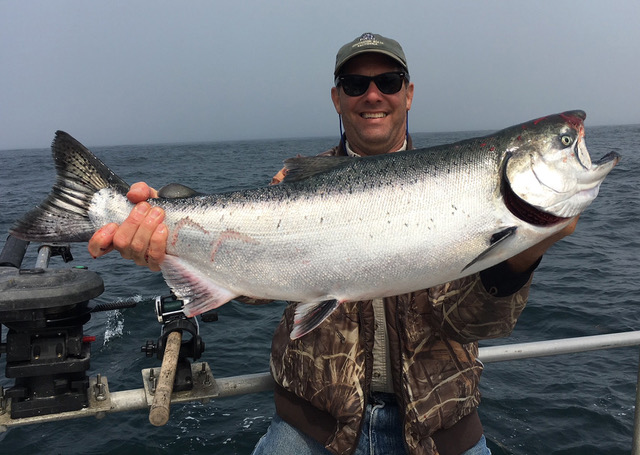 North Coast ocean sport salmon anglers are looking at a potential two-month season this summer, which should provide plenty of opportunity to land a salmon like the one pictured here with Grass Valley resident Larry Elis. The season is tentatively slated to begin on June 6 and run through Aug. 8 in the CA-KMZ.
Photo Credit: Photo courtesy of Curt Wilson/Wind Rose Charters

Expecting the worst and hoping for the best, North Coast ocean sport salmon fishermen received some good news this week. Following last year’s low Klamath returns and with only 186,600 adult kings said to be in the ocean this fall, heavy restrictions were likely eminent. But that wasn’t quite the case as the Pacific Fishery Management Council (PFMC) came up with a modest 63-day season for the CA KMZ. (OR/CA border south to Horse Mtn) Our season in Alternative 1 that was developed back in March was from June 6 through July 31. As luck would have it, the April closures in the San Francisco and Monterey management zones saved some Klamath fall Chinook impacts, which in turn extended our season by eight days. The CA KMZ season submitted for the current preferred alternative is June 6 to August 8, which in all likelihood will be adopted.

Fishing will be allowed seven days per week for all salmon except Coho, two fish per day and a minimum size limit of 20 inches total length for Chinook.

With a robust 473,200 Sacramento fall Chinook said to be swimming in the ocean, the seasons to our south will have a much longer season, even after all of the April openers were delayed. The area from Horse Mountain south to Point Arena, which includes Shelter Cove and Fort Bragg, will open on May 1 and run through November 8. The San Francisco area will have the same season opening and closing dates. Fishing will be allowed seven days per week for all salmon except Coho, two fish per day and a minimum size limit of 20 total length for Chinook.

To the north in the Brookings area (OR KMZ), the season will open on June 20 and run through August 4. Fishing will be allowed seven days per week for all salmon except Coho, two fish per day and a minimum size limit of 24 inches total length for Chinook.

Klamath/Trinity river update
Along with ocean salmon seasons up for final approval, the PFMC allocated 1,286 adult Chinook for the Klamath Basin quota. Bag and possession limits will be determined at the CA Fish and Game Commission meeting on April 15 and 16. The tribal allocation is 8,575 adult Klamath River fall salmon, split between the Yurok and Hoopa tribes.

Potential sportfishing ban – Commission to hold emergency meeting Thursday The California Fish and Game Commission is asking the public to join an emergency teleconference call on Thursday, April 9 at 8:30 a.m. to discuss handing over temporary authority to the California Department of Fish and Wildlife (CDFW) to delay, suspend or restrict sport or recreational fishing in specific areas within the state due to public health concerns related to COVID-19. If authority is granted, CDFW would be able to make statewide decisions up until June 1, when the authority expires. If the director of CDFW finds that delaying fishing seasons, such as the Eastern Sierra trout opener, April 25, is necessary to protect against the threat from COVID-19, then the 2020 fishing season could face several restrictions based on state, federal, local, and tribal public health guidance and public safety needs.

Brookings ocean update Lingcod fishing has been especially good out of Brookings according to Andy Martin of Brookings Fishing Charters. “Boaters are getting into lings to the north and south of the harbor,” said Martin. “Fishing also is very good for rockfish. A few lingcod caught been caught from the north jetty and near Chetco Point from the rocks. Surf perch are biting near the Chetco River jetties. Several normal hot spots, including Crissy Field, Winchuck Wayside, McVay Rock and alone Ranch, are closed because of state park closures in Oregon.”

Eel River steelhead returns
As of April 5, a total of 237 steelhead have entered the Van Arsdale fish count station according to Scott L Harris, an associate Biologist with the Northern Region. Making up that total is 85 males, 115 females, and 37 unknowns. The Chinook count stands at 153 and is done for the season. For more information, visit https://eelriver.org/the-eel-river/fish-count/

The Rivers
Smith
The Smith remains in good shape, running at just above 8-feet on the Jed Smith gauge as of Wednesday. According to guide Mike Coopman, last weeks rise brought in some fresh fish. “A few fresh steelhead showed up last week, and we saw a few downers as well,” said Coopman. “I’ve heard there’s quite a few fish spawning in the upper reaches now, those are probably fish that just came in. I’d expect to see a lot more spawned out fish making their way down in the next few weeks.” As a reminder, all of the State Park entrances are closed and blocked off. The three access points that remain open to non-commercial boats are the U.S. Forest Service launch at the Forks, Ruby Van Deventer County Park and the Del Norte County boat ramp (Outiffers).

Main Stem Eel
As of Wednesday, the main Eel was running at 5,200 cfs on the Scotia gauge and starting to turn a little green. It could fish by the weekend, and will be in prime shape by early next week. Should be plenty of downers as well as fresh steelhead in the mix.

Lower Rogue
According to Martin, a few spring salmon were caught early last week on the lower Rogue, but fishing has since slowed, with low, clear water and not a lot of fish around. “Dry weather is expected for several days, which may keep fishing tough. Late April and early May are prime time for lower Rogue springers.” 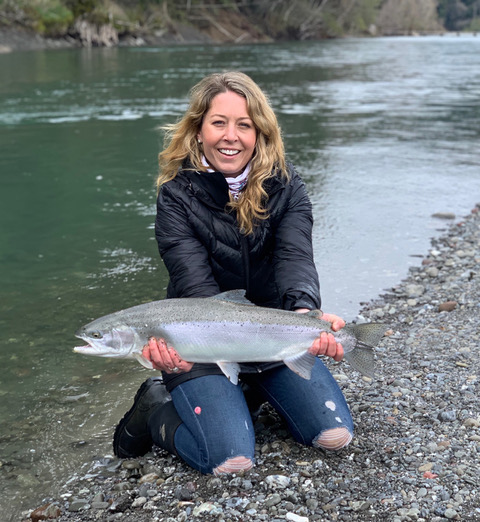 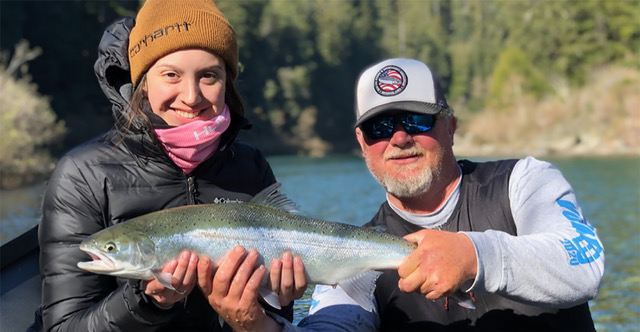 3-19-2020
Our lives are changing at a dizzying pace due to the pandemic created by the Coronavirus. Shelter in place orders...... Read More