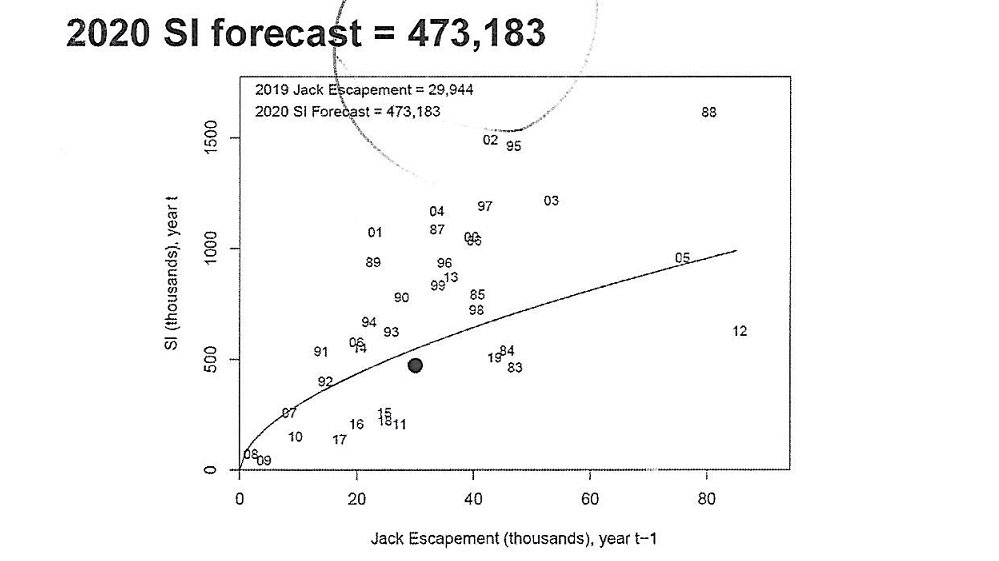 The CA Dept. of Fish and Wildlife believes there are about 473,183 adult salmon swimming around in the ocean now.   This is better than their prediction last year at this time of 379,600 and should lead to a decent fishing season.   The forecast of 379,600 salmon in 2019 ended up being about 136,000 shy of what was eventually counted after fishing and spawning surveys.

These numbers were released at the annual Salmon Information meeting on February 27 in Santa Rosa.  The predicted 473,183 Sacramento salmon in the ocean now will be factored into fishery manager decisions about when and where salmon fishing will be allowed this year off the coast.  It will also be used by the state to almost certainly allow a two-fish daily bag limit for salmon in inland waters.

The return of adult winter run to the upper Sacramento River provided another relatively bright spot in 2019 with an estimated 7,569 adult salmon returning to spawn, the highest number since 2006.  Their offspring are being counted downstream in Red Bluff where special counting traps are moored in the river.  These traps have already counted an estimated 3.8 million, the highest in the last seven years.

Not all of the news was good.  Returns of salmon to the Klamath River came in at only about half of the minimum number set by fishery managers.  Instead of getting the targeted 40,700 adult spawners back into the Klamath, only 20,245 were counted after evading hooks and nets in the ocean and river.  As a result, fishery managers will take extra precautions in the 2020 ocean fishery to protect the expected low number of Klamath River salmon in the ocean.

The value of protecting natural parts of the rivers is repeatedly underscored in the info CDFW released.  For instance, an estimated 75 percent of the adult salmon that returned to the Sacramento basin in 2019 spawned in the wild and natural origin salmon factored big in the catch.   The Feather and upper Sacramento River each got about 40 percent of the spawners while the American River got about 19 percent.  The San Joaquin saw about 18,000 adult fish return and the Mokelumne hatchery reported good returns.

The National Marine Fishery Service wanted to see 160,000 adult salmon return to the Sacramento basin in 2019 to ensure a healthy fishery.  When all was said and done, about 162,000 were counted, although some inland fishing guides reported poorer fishing than that number would suggest.  In addition, just under 30,000 two-year-old salmon returned.  These provide the base number used to calculate the number of their brethren staying out in the ocean for an extra year which is how the 473,183 forecast was derived.

The contribution of the various hatcheries to the ocean salmon fishery in 2019 changed from 2018 when the Mokelumne hatchery was the biggest contributor.  In 2019 the commercial trollers caught more Coleman hatchery fish than any other, followed by Feather River, Nimbus and the Mokelumne hatcheries, in that order. In the ocean sport fishery, Feather River hatchery fish were the biggest contributor followed by Coleman.  Nimbus and Mokelumne hatcheries both contributing 19 percent of the hatchery fish caught.  The bigger contribution of the Coleman hatchery is not surprising considering the excellent spring outflows in 2017 which greatly boost the survival of these fish.  Coleman released over 12 million baby salmon that spring, more than any other hatchery.

Fishery managers will take all of this info to the Pacific Fisheries Management Council (PFMC) and craft three season options when they meet the first week of March.  The three options will then go out for public comment and be finalized when the PFMC reconvenes in early April.

The CDFW salmon report breaks out where along the coast salmon were caught.  Anyone who followed reports last year won’t be surprised to learn that most of the ocean salmon were taken in the San Francisco cell which stretches from Pigeon Pt. in southern San Mateo County all the way up to Pt. Arena in southern Mendocino County.  The second most productive area was in what’s called the Monterey cell which stretches from Pigeon Pt. south all the way to the Mexican border.  There were reports of salmon being caught last year all the way to and below the Mexican border although the big catches in this cell came in the commercial fleet off San Luis Obispo/Morro Bay and later in Monterey Bay.

For the San Francisco cell, sport fishermen and women both on private boats and party boats, averaged a fish per person per day of fishing.  The catch was a tad less in the Monterey cell with private and party boats averaging about .8 of a fish a rod per day.  The sport fleet averaged only about a half a fish a rod in the Fort Bragg and Klamath Management zone further north.    Commercial trollers had their best season since 2013 with the daily average catch being 17 fish, matching 2013’s catch rate. 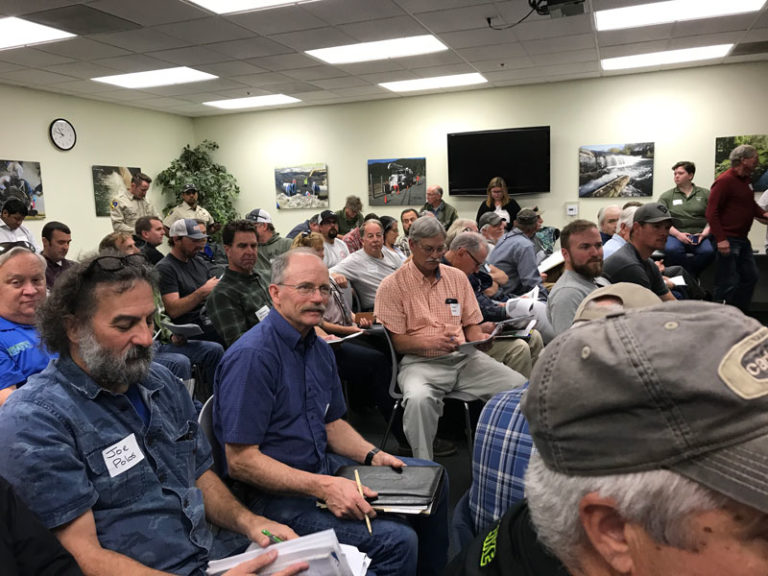 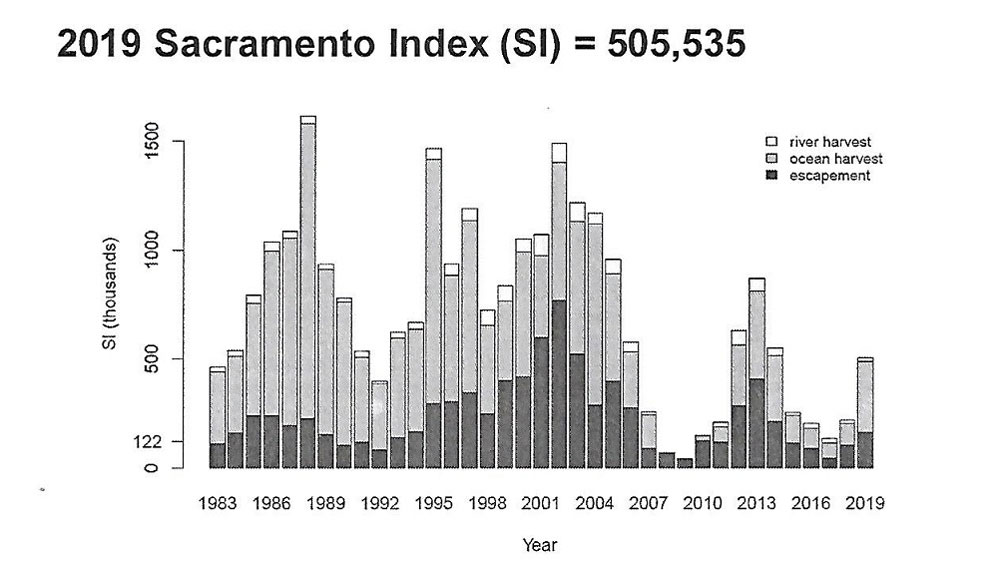 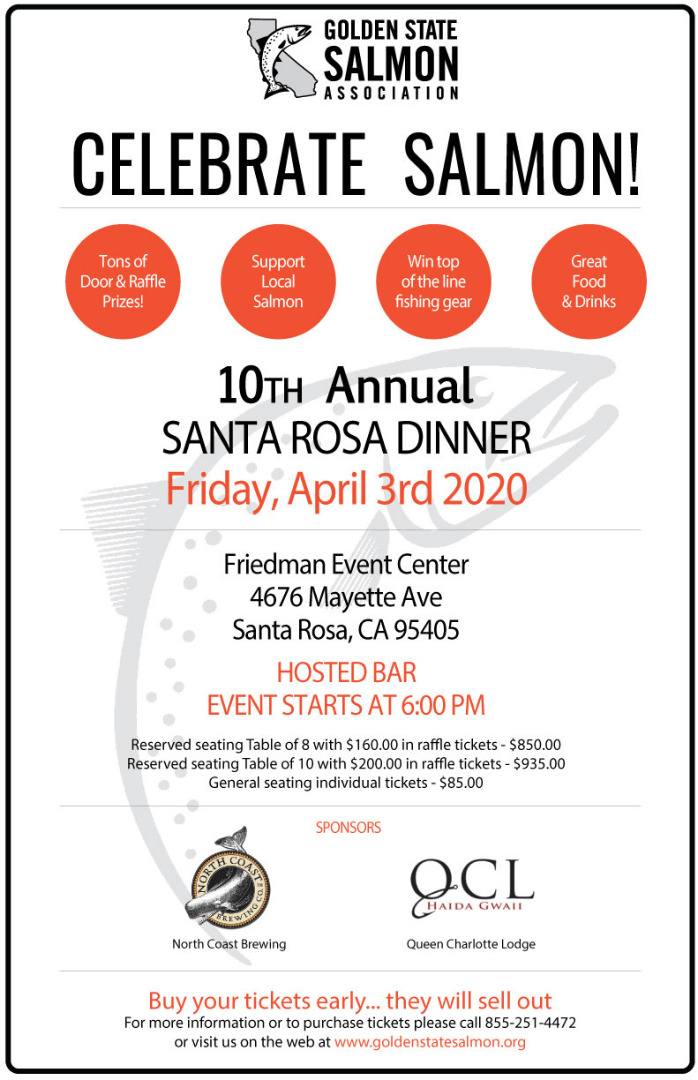 2-11-2020
Salmon season will be here before we know it! Join your fellow fishermen and women to toast the eve of...... Read More 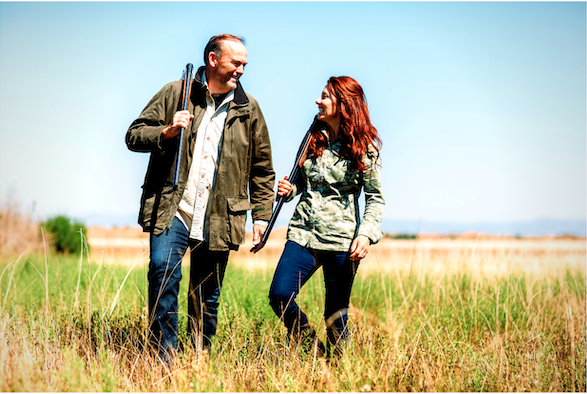