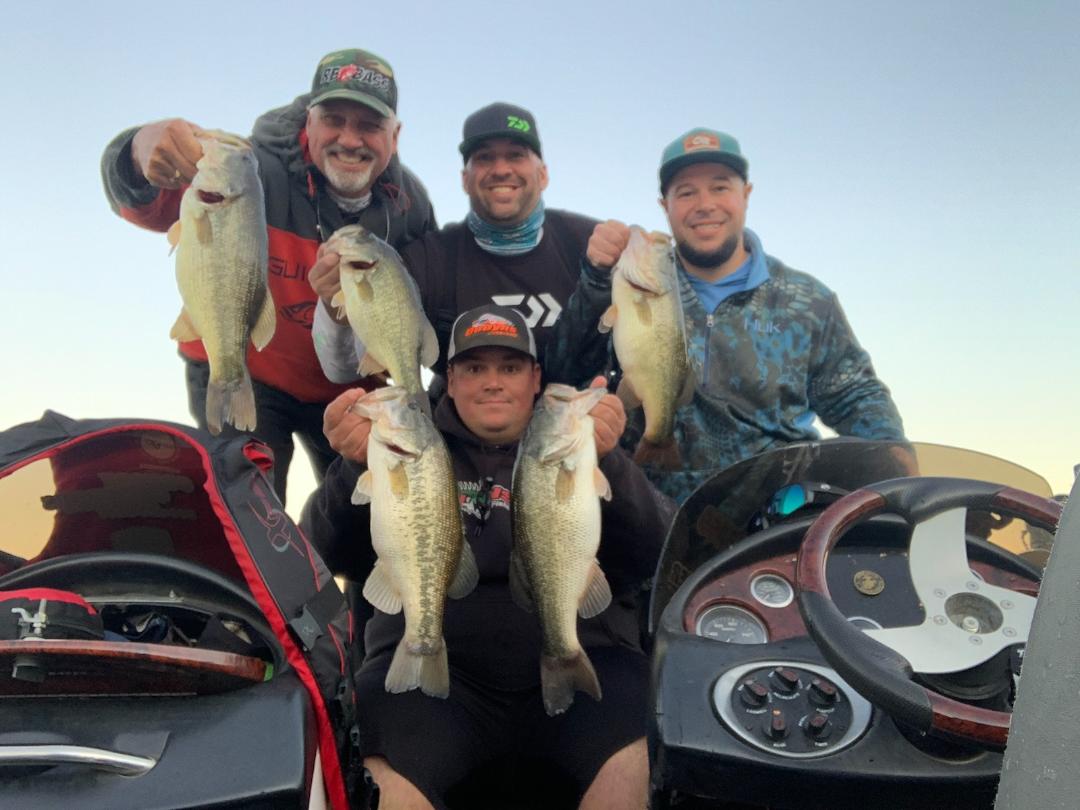 We at RB Bass not only provide you anglers with current fishing information, ,but while doing so, we have a blast too! What an awesome weekend we had at Clearlake, staying in the Limit Out Baits and Tackle cabins (thanks Bill), instead of at our RB brother Bob Tyler’s place in the Keys, as he is working his butt off in Nevada, miss you little buddy.  RB Bass, ( rbbassfishing.net ) killed it with RB family and friends on this trip.  Comradery at the cabin had an Air about it, as we had a Chinese dinner the first night.  We woke up to 36 degrees and iced windshields and boat. I looked like the Pillsbury Dough Boy, with all the cold weather gear on, I could barely drive.

Day one and two were pretty much the same in weather and in searching for a big bag.   Our good friend Frankie Mendes killed them on the lake, with an A-rig, bagging to many to count, and even breaking a rig and losing one to a monster fish that flashed the rig as it swam away with it, rubbing it in. After we picked his jaw up from the boat deck, he recovered (not really) and went back at it. Thank you RB Bass brother Rob Clarke for replenishing his A-rig supplies. Frankie is hard on gear if you haven’t noticed his boat needs some TLC. Bring it up, Chris Perez and I will put a hurt on it for ya, but leave the hole in the engine cowling, it gives it character, that’s what I say about my seats! We tried to get Frankie to put down the A rig, and use an Underpin, as most of the bigger fish were caught on it, but his legendary Greek stubbornness came through. The fish could hear the foot stomp back at Redbud. At least he was on fish. Not bad for not being on this lake in 6 years! He also does a great Seal impression that is going after donut holes, being tossed his way… lol.

His buddy, now ours, Chris Allen fairly new to all this broke his personal best, not once but twice in this outing. Once on a drop shot, I’ve never seen a guy continuously shake his pole like that, and his last big one, on a Underspin. He was all smiles after that, at least I think it was that, not the Keto garlic pizza the night before. His excitement was storybook telling. He was relentless!

RB Bass brother and Mac-n-Cheese comedian Tim Meeks paired up with rookie Armand Perez  (joking, he’s  an accomplished WON Bass and other tournament top ten angler) pulled in almost 20 lbs on Sunday. Both are accomplished anglers. Though we didn’t see much of them on the water, we certainly heard from them at dinner Lol

RB Bass angler Chris Perez  and myself, ate way too much Chinese food the first night and Pizza the following night, rallied both days from our food babies, and found our schools at 18+ lbs day one and 20+ lbs day two. I kid you not, my partner can find and catch fish in a bathtub blindfolded. Instinctually he is a fish attractor. Watching him work Slow is a thing of beauty, because he hates it, but it makes my day. Chris put us on fish all day, and I’m really happy we pit stopped at County Park for him….really…really happy!

We Caught fish on a Deep crank, an A-Rig, an Underspin, a Drop Shot,  a Neko Rig, a Rip bait and others. You had to work for them, as they were schooled up, but once you found them it was game on. The water up North was 54, and down South it was 57 – 60 depending where on the lake you were. It was freezing in the morning, yet Chris still had his Flops on, but we peeled layers off for the afternoon. Beware there was smoke on the lake as usual, I haven’t been up there this year to where there wasn’t any smoke. Thank you my wife Tracy Rogers for my new respirator mask, as it kept me on the water breathing. It was the last hurrah at Clearlake this year, as snow was predicted for the following few days, and for once the weather prediction was correct.  As of this writing, it came in.  I’ve been there done that and I’m not fishing in the snow again if I can help it. 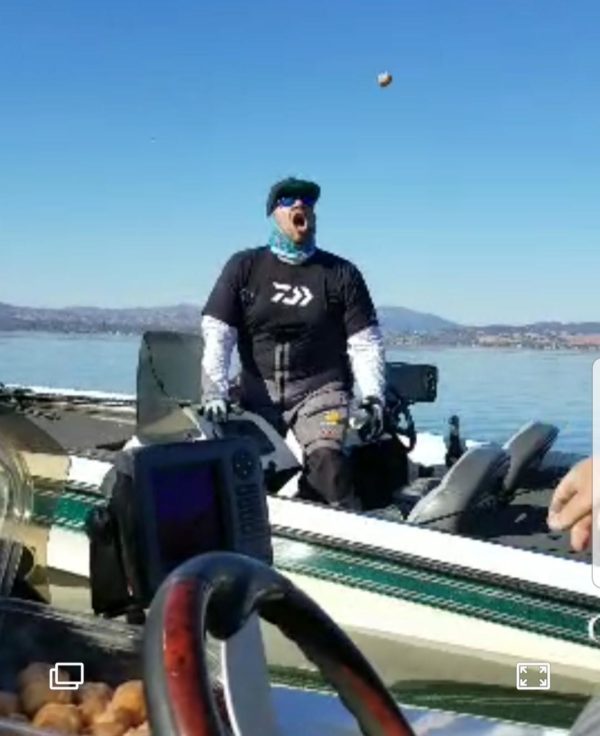 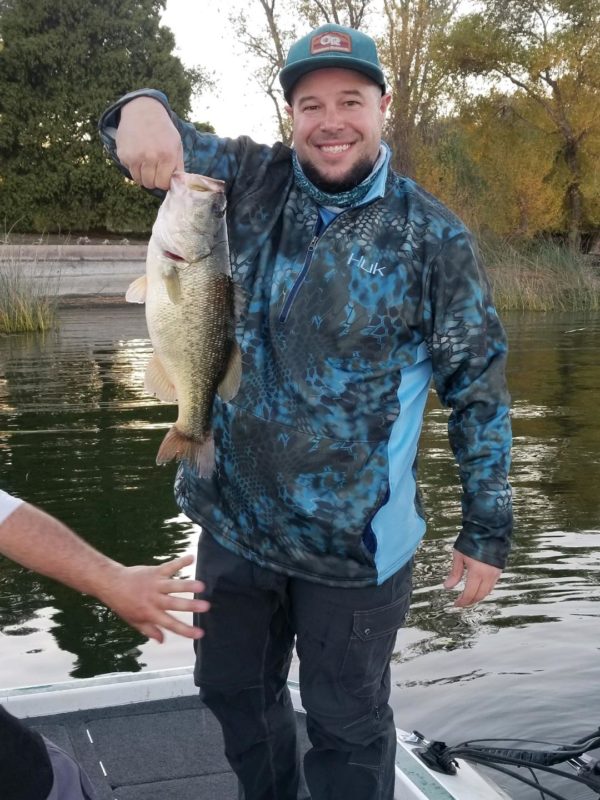 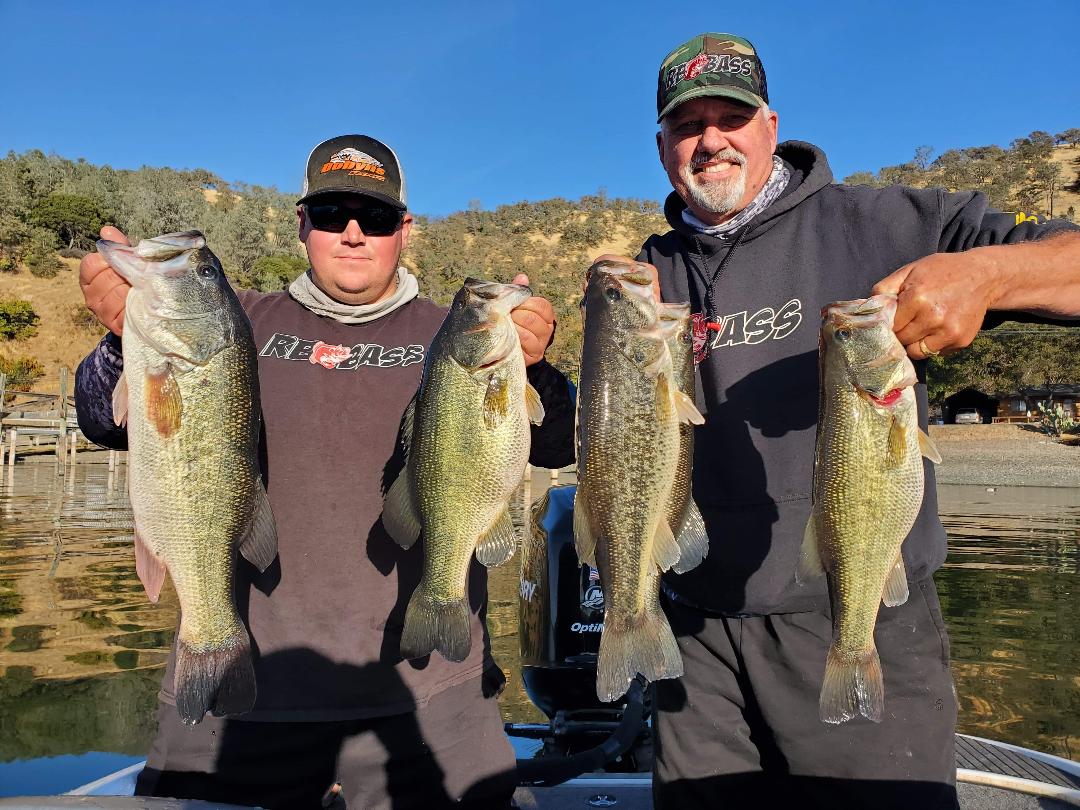 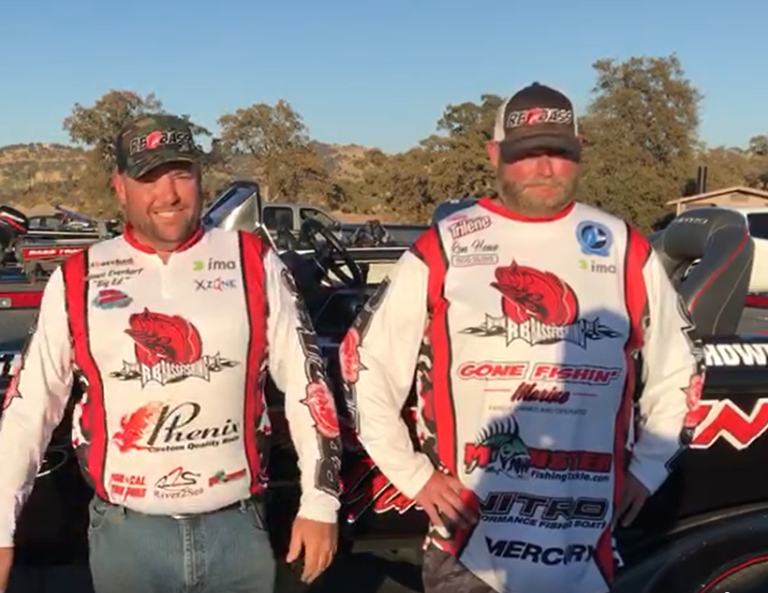 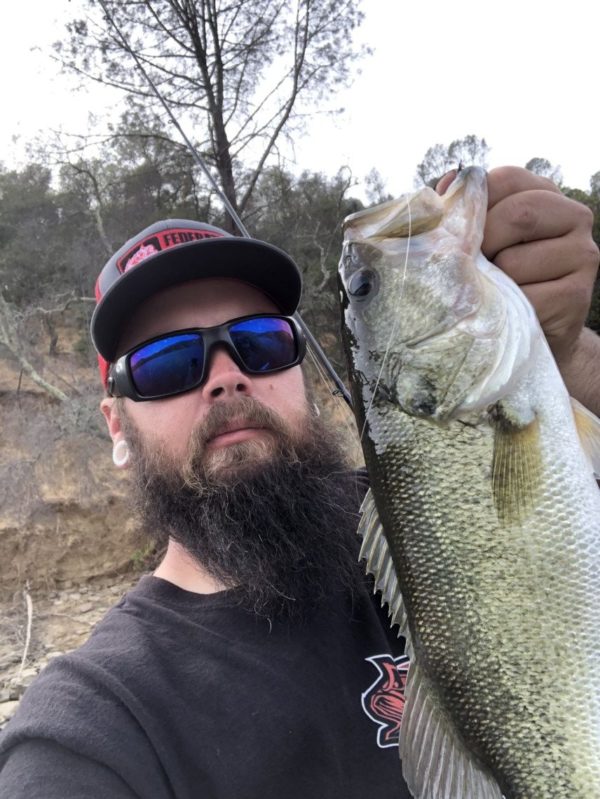