Fall Kings Yet to Show on The Klamath 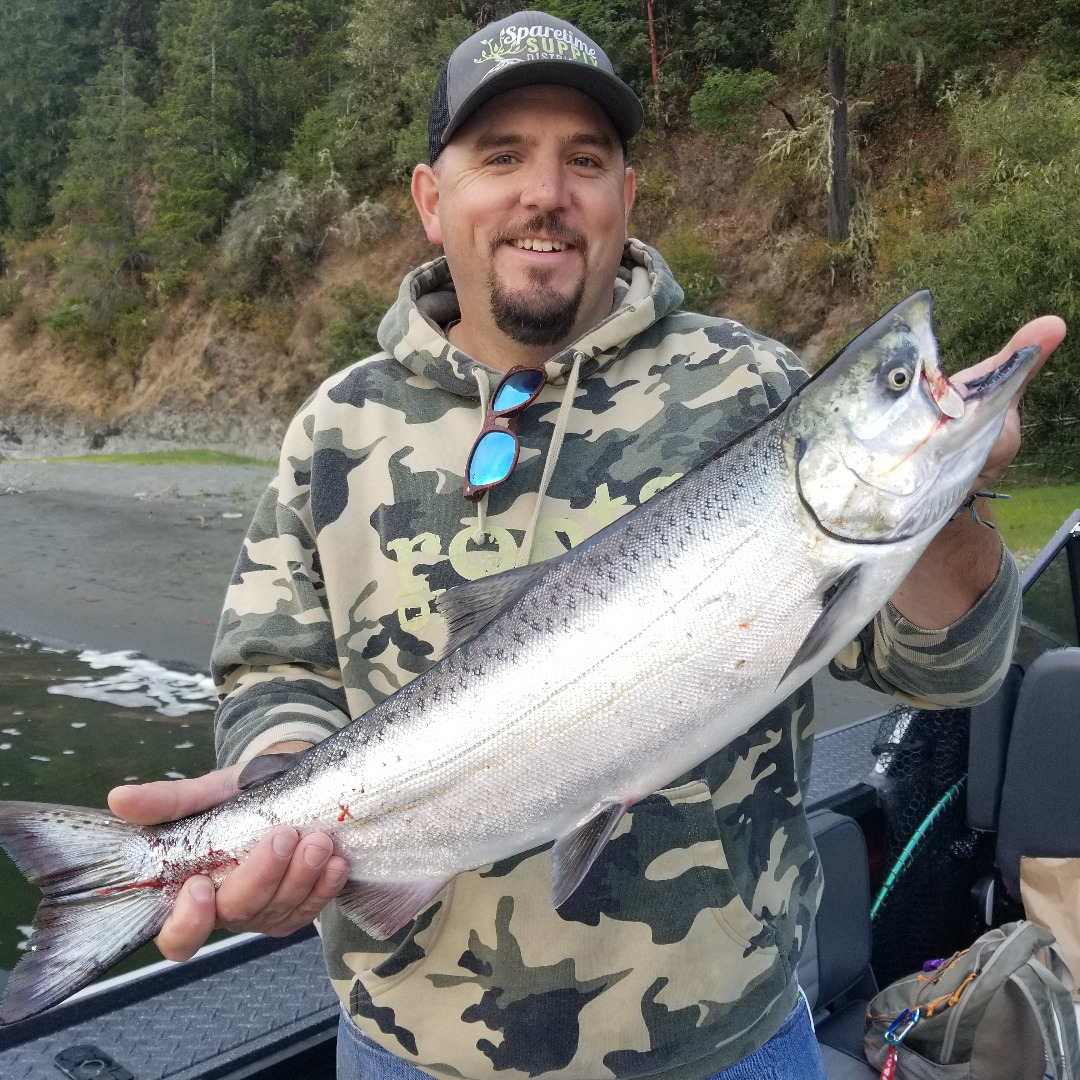 Chinook Salmon
Willits resident Andrew Hosford landed a nice king salmon Tuesday on the Klamath River. The fall kings have yet to move into the lower Klamath in big numbers, but it should bust open any time.
Photo Credit: Photo courtesy of Alan’s Guide Service

The fall run of Klamath River Chinook has yet to really take off, which is a little unusual heading into the third week of August. There’s been flurries of fish moving in the estuary, but not many are choosing to head upriver as of yet. Reportedly, the commercial boats have been seeing lots of salmon offshore of the Klamath mouth. It should be just a matter of time before they decide to make their way upriver in big numbers. According to Dan Troxel, an Environmental Scientist on the Klamath River Project, only 25 adult salmon had been harvested from the Highway 96 bridge at Weitchpec to the Klamath mouth towards the quota of 3,818 for the week ending Aug. 19. Of those, 20 adults were caught below the Hwy. 101 bridge. If the fishing doesn’t bust open soon, there is help on the way. Beginning next Sunday, Sept. 1, the Bureau of Reclamation will begin to increase flows to the Trinity River for the Hoopa Valley Tribe's Ceremonial Boat Dance. Releases will begin to increase above the base summer flow of 450 cfs at 5 p.m. Sept. 1, and reach a peak flow of 2,650 cfs between 9 a.m. and 7 p.m. on Sept. 2. The releases will then gradually decrease back to the base summer flow about 3 p.m. on Sept. 5.

Fall regulations in effect on the Klamath
Fall regulations went into effect on the Klamath River for fall-run Chinook salmon beginning Aug. 15 and run through Dec. 31. On the Trinity, the fall quota will begin on Sept. 1 and run through Dec. 31. The in-river quota for the entire Klamath Basin is 7,637 adult fall Chinook. The daily bag limit will be two Chinook, no more than one adult (greater than 22 inches) and the possession limit is six, no more than three adults. Two hatchery steelhead or hatchery trout may also be retained, with a possession limit of four each. Anglers may keep track of the Klamath and Trinity river quotas by calling 800-564-6479. For Klamath and Trinity fishing regulations, visit https://nrm.dfg.ca.gov/FileHandler.ashx?DocumentID=169262&inline

Klamath River Salmon Derby
The Nor-Cal Guides and Sportsmen’s Association will be holding their inaugural Klamath River Salmon Derby on Aug. 31. The biggest salmon pays $1,000, second is $500, and third place is $250. The Junior winner will receive a life-time fishing license. Entry fees are $70 for non-NCGASA members, $50 for member, and $30 for Juniors. Weigh in will be at the old Redwood Rest Resort (kitty corner from Steelhead Lodge) from 2 p.m. to 4 p.m. All entries include a free BBQ lunch, water and a raffle ticket for additional prizes. Sign up online at https://ncgasa.org/donate/ or at Little Ray’s Tackle in Klamath. Participants must be paid for prior to 6 a.m. on the day of the event. For more information, visit https://www.facebook.com/events/1211703795686649/

The ocean calmed down on Monday, paving the way for a short weather window for anglers chasing tuna out of Fort Bragg and Coos Bay. The warm water pushed offshore out of Eureka and Crescent City, but a few boats made a long run and caught fish. The lone Eureka boat ran 52 miles on Tuesday and boated 17. One of the Crescent City charters ran 50 miles for 58 tuna. The runs were much closer for Fort Bragg and Coos, and it sounded like the scores were better as well. Fort Bragg boats only had to go 25 miles and scores ranged from 40 all the way to 80. Coos was equally as good, with boats running 20 miles for all the tuna they wanted.

The salmon bite remains hit and miss out of Eureka. Most of the effort has been straight out of the entrance in 200 feet of water on the 45 line. “A couple of the charters limited out on Monday, but fishing was tougher on Tuesday,” said Tim Klassen of Reel Steel Sport Fishing. “It seems like the fish are there, but we were only able to land one keeper. I know of one boat that landed four, so it’s right place, right time. And you need to make your bites count. There were small patches of bait, but not many murres around,” added Klassen. The Cape has been productive per usual, and Tony Sepulveda of Shellback Sport Fishing has been taking advantage of calm ocean conditions to put his clients on the fish. “The Lost Coast has been incredible as always,” said Sepulveda. “Vermillion rockfish have really been the story the last few weeks. Giant ones have been my most abundant species. We boated 28 huge reds in our 60 fish limits on the last trip to go with limits of lingcod all running 12 to 25 pounds.” The California halibut bite is still going strong in Humboldt Bay according to Sepulveda. “Limits have been the norm and a lot of days they’ve come quick. And it’s a really nice grade, with lots of fish in the eight to 10-pound range and we had them as big as 22 this week,” added Sepulveda.

Shelter Cove
“The rockfish and lingcod bite was great this week, with most of the effort around the Hat,” said Jake Mitchell of Sea Hawk Sport Fishing. “The salmon bite was scratchy at best, with most of the action down off White Rock in 70 feet of water. The tuna bite was really good on Monday and Tuesday, with boats getting 25 to 60 fish 20 to 30 miles out.”

Crescent City
The fishing effort has slowed down this week reports Chris Hegnes of Crescent City’s Englund Marine. “The one bright spot was one of the charters ran for tuna on Tuesday and did really well. They went 50 miles and put in 58 tuna by 11 a.m. With the ocean coming back up, that may be it for a while. The rockfish and lingcod are both still biting well at all the usual spots. The California halibut and the Thresher action along South Beach have both slowed down,” Hegnes added.

Boats headed 35 miles out of Brookings for albacore on Tuesday, but returned with just a handful of fish reports Andy Martin of Brookings Fishing Charters. He said, “The action remains very good to the north out of Charleston. Fishing has been good for lingcod out of Brookings, but slow for salmon.”

The Rivers:
Lower Klamath
A bunch of steelhead moved into the river late last week and the fishing was good for both adults and half-pounders. However, it looks like they didn’t bother to stick around as the bite slowed down on Tuesday in the lower river. The few boats out side-drifting and dragging bait in the deeper holes are catching a few adult salmon, but not many. The estuary fishery isn’t red-hot by any means, but there were a few caught on Wednesday by boats trolling anchovies.

Lower Rogue
The Rogue Bay has shown signs of life the past week, but has been hot and cold according to Martin. “Friday and Saturday produced good fishing, but the action slowed to a halt on Sunday. There was a wide-open bite along the jetties halfway into the incoming tide on Monday, with more than 30 fish landed in an hour, but Tuesday was slower with about 15 total fish caught,” said Martin.

Epic Week of Tuna Fishing for the North Coast 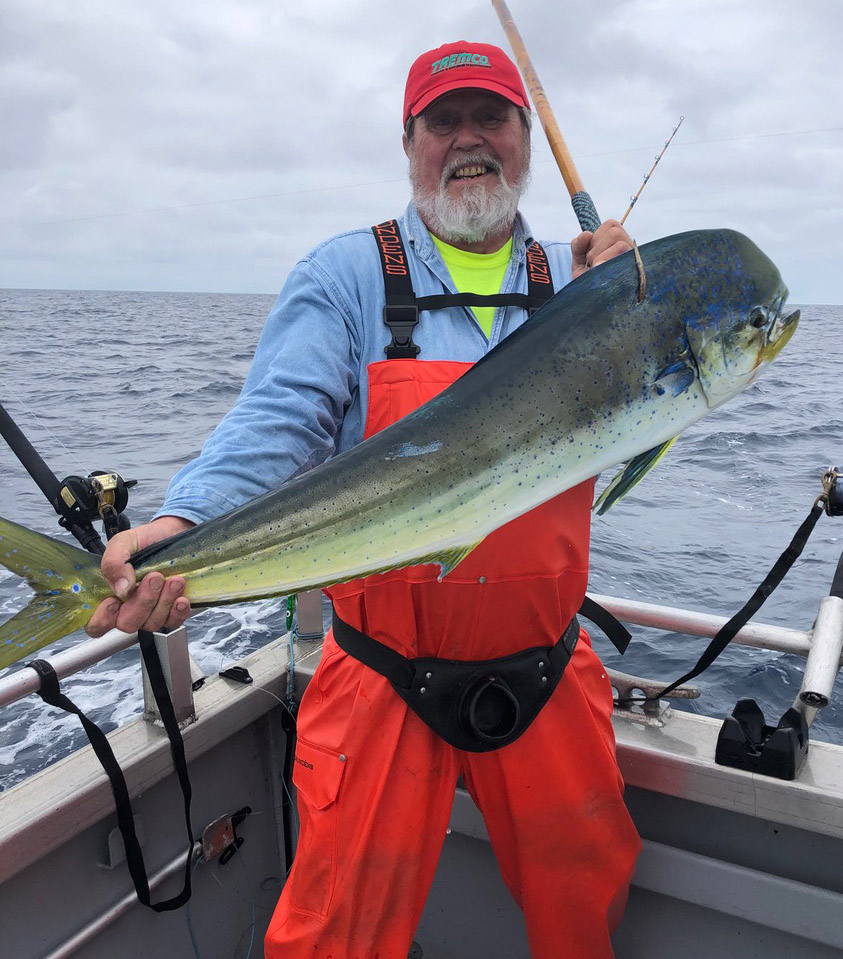 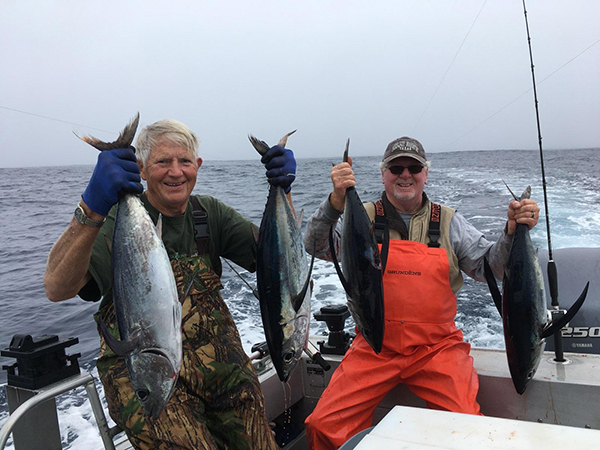