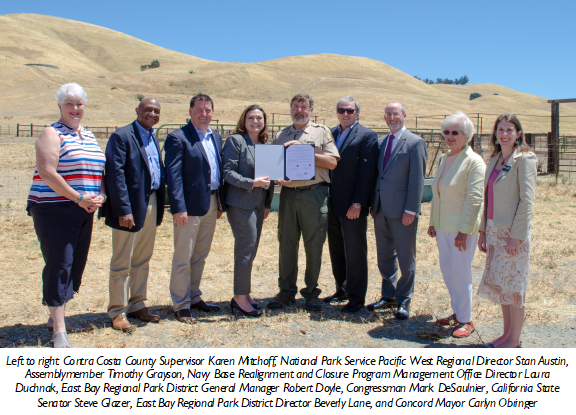 Concord, CA – A formal signing ceremony took place Saturday, July 13 at the former Concord Naval Weapons Station to celebrate the transfer of 2,216 acres to the East Bay Regional Park District for a future Regional Park. The transfer was the culmination of more than 20 years of community support and advocacy. An additional 327 acres are set to transfer to the Park District at a later date. The City of Concord is slated to receive roughly 2,300 acres from the Navy for development and is planning a mix of residential, retail, and commercial uses.

The signing ceremony was part of a larger public event that also commemorated the 75th Anniversary of the Port Chicago Explosion. The event included a panel discussion hosted by the Friends of Port Chicago National Memorial and National Park Service, a wreath-laying ceremony by the American Legion Riders District 9, information booths, lunch, and walking and vehicle tours of the property. Over 600 people attended the event.

On July 2, 2019, the East Bay Regional Park District Board of Directors unanimously approved accepting conveyance of the property and fee title ownership from the U.S. Navy, a process expected to take six months.

The new park, along with a planned visitor center, will integrate the significant human history of the Concord Naval Weapons Station site with the natural history and outdoor recreational opportunities of the land.

Opening the park is expected to take several years and will require significant financial resources. Development will include future park amenities such as a visitor center, staging areas, public access points, and miles of recreational trails for hiking, biking, and nature viewing. Public access is expected to come first to the southern portions of the park between Bailey Road and Kirker Pass Road.

“Conveyance of the property to the Park District is the culmination of decades-long community effort,” said Beverly Lane, who has represented Concord on the East Bay Regional Park District board since 1994. “This is a proud moment for the Park District and shows the great power of persistence and working together with the community. The U.S. Navy, National Park Service, City of Concord, and Save Mount Diablo have been tremendous partners in this effort.”

The East Bay Regional Park District is the largest regional park system in the nation, comprising 73 parks, 55 miles of shoreline, and 1,250 miles of trails for hiking, biking, horseback riding, and nature learning. The Park District receives more than 25 million visits annually throughout Alameda and Contra Costa counties in the San Francisco Bay Area.

Striped Bass Action is Getting Better

Del Valle Lake
7-22-2019
Striped Bass: The striped bass action is getting better and better but the day. A lot of action is by the narrows and hot bait right now is anchovies. Other baits such as sardines, mackerel, shad and shad imitations lures are doing very well. Boils are happening in the early mornings and  are getting more and more common to see, still they don’t last too long so if you abetter the boils be here early. Large/smallmouth: The past week the bass have...... Read More

Contra Loma Reservoir
6-26-2019
Reminder to boaters:  All watercrafts (including float tubes) need to have a wearable Coast Guard approved personal floatation device (PFD) per person.  Children age 12 and under must wear personal floatation device (PFD) while the vessel is underway. Contra Loma has a great sunfish population including Bluegill and Redear Sunfish. These fish can usually be found in the shallower and more vegetated coves and along the dam face. We would recommend using small lures or worms if you are targeting the...... Read More