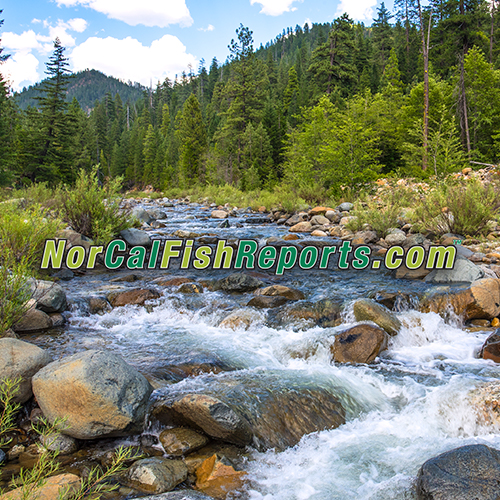 Trinity River water releases are now back to TMC recommended releases, now that repairs are completed on the release gate. Water flow changes are to reach maximum releases at 04:00am Sunday May 19th 9,000cfs, then start ramping back down; Tuesday May 20th to 7,000cfs, Friday May 31st flows to reach 2,150cfs by 2:00pm. After reaching 2,150cfs the flows will start to go back up to simulate snow melt for spring runoff.  During these water flow releases you must be aware that the river currents will be changing and the river is dangerous. Please act accordingly.

The Headwaters Report stated there should be a definitive Adaptive Management plan for the TRRP. I was of the understanding that the Trinity Adaptive Management Working Group (TAMWG) was advising the TMC of just that since 2005. Some of this was accepted and some not! I believe a complete Reorganization of the TRRP and TMC would be a great improvement to the River Restoration Program. It also might reduce the cost of doing restoration. The ROD calls for Adaptive Management and who better to advise the TMC and TRRP than stakeholders who live and work along the river!

The idea of electro shocking the upper river to eliminate Brown Trout is not in the best interest of fishing because it gives us another opportunity to fish. Several years ago, the CDFW recommended to the Fish and Game Commission that the limit on Brown Trout be increased from two to five trout per day with ten in possession on the Trinity and it appears that it has had some affect because it has become harder to find Brown Trout in the upper river. If this is true then it would be a waist of money to try and remove what Brown Trout that are still in the river. The money would be better spent on producing more fish from the hatchery.

With the water releases and rain the Trinity has been hard to fish and most of the fishing guides have moved over to the Sacramento River for fishing. Up until the rains of last week the Sac was fishing pretty good. A fishing friend of mine Steve and his wife fished over there last week and were able to have a 50 fish day. Some of the Trout they caught and released were bright chrome steelhead on their way up to spawn. I have heard that Whiskeytown Lake is turning over (the thermal incline) and that kokanee are on the bite near the dam.

Fishing: fishing has been tuff this last week because of the highwater flows. Hopefully the higher flows will flush out the rivers and pathogens’ that have been causing the juveniles to die and we will start getting better returns of the salmon and steelhead.

Mid-Klamath: Iron Gate Dam releases are down to 1,258cfs right now and could be good for some trout fishing above I-5. If this is correct then you might want to try the Upper Klamath. The Mid and Lower Klamath are definitely out for fishing right now.

Trinity Lake: the lake is 10ft below the overflow (a decrease of 10ft) and 97% of capacity (an increase of 3%) inflows are 5,563cfs and releases are 7,715cfs into Lewiston Lake with N/A cfs being diverted to Whiskeytown Lake and on to Keswick Power Plant, which is releasing 8,044cfs into the Sacramento River.