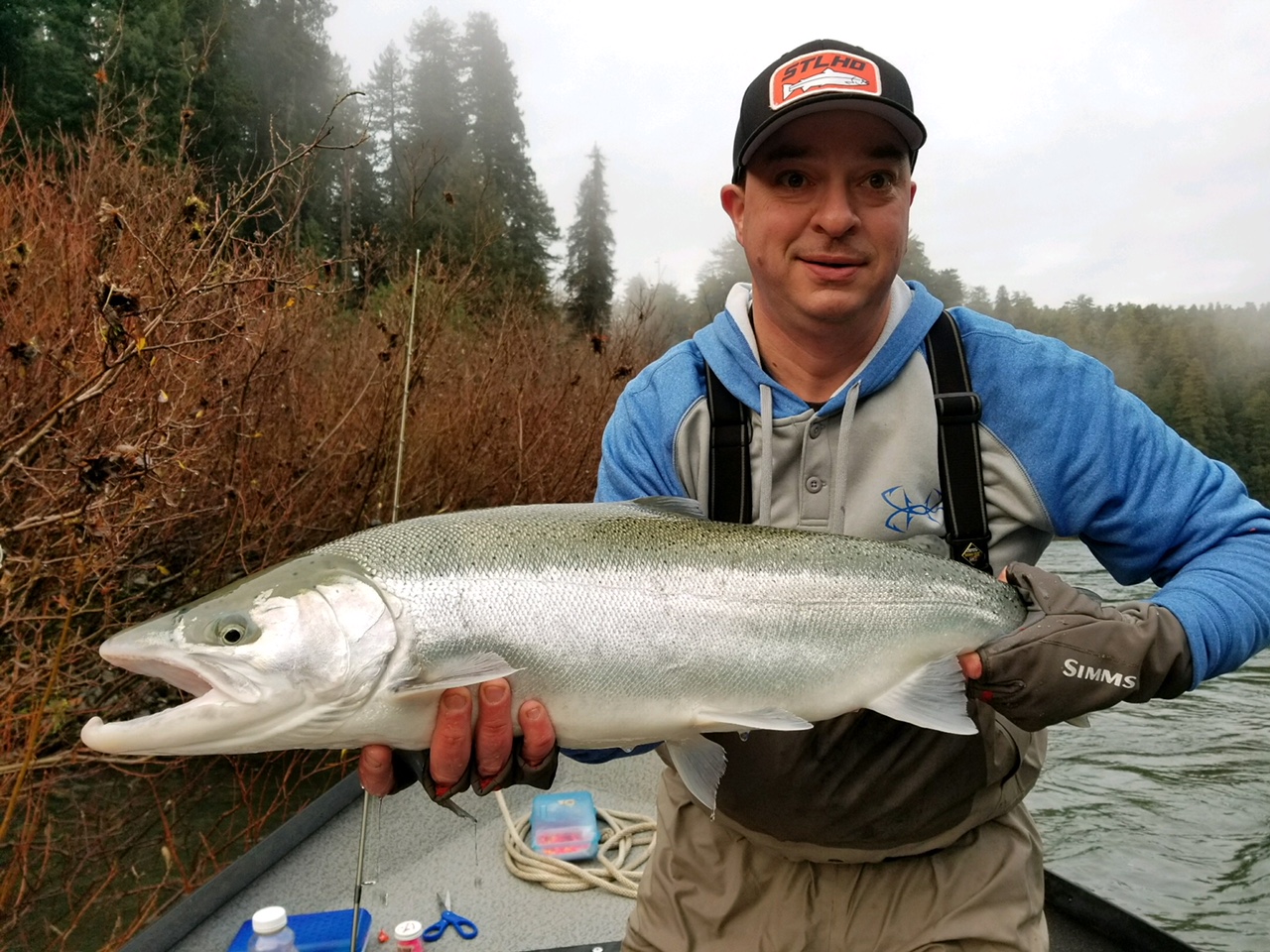 Steelhead
The Smith River kicked out this chrome-bright winter steelhead last week for Arcata resident Justin Kelly. All of the coastal rivers should see increased flows from the storms that are expected to hit the North Coast over the next few days. Photo courtesy of Alan Borges/Alan’s Guide Service.

Coming off the first weekend of the winter steelhead season that saw all of the coastal rivers turn green, I was sure hoping to hear some better scores. From the South Fork Eel north to the Chetco, steelhead reports ranged from decent to tough – and everywhere in between. The Chetco likely fished the best, but there were plenty of boats that came up empty. The Smith has been tough all season, and not much changed over the weekend. The Mad River should have been the hot spot, but it fell flat on its face. For whatever reason, the bulk of the hatchery steelhead have yet to show up there. Both the main stem and South Fork Eel turned green over the weekend, but it was tough fishing for most. A few boats ran into some fish on the South Fork on Sunday, but again, lots of zeros. But just as your next cast could lead to a 20-pound steelhead, the next big storm, which is predicted for Sunday, could lead to North Coast rivers chocked full of winter steelhead.

The weather ahead
The North Coast can expect continued wet conditions according to Ryan Aylward of Eureka’s National Weather Service. “The first front will move in on Wednesday night, with snow levels dropping to 3,000 feet overnight. Rain amounts for this front will be around an inch in Crescent City and maybe three-quarters in Eureka. Lingering showers are forecasted for Friday and possibly into Saturday where we can expect a quarter to a half-inch. The next system will arrive on Sunday, and this should bring some heavier rain. The mountain areas in Del Norte could see over three inches, with one and a half falling at the lower elevations. The Eel basin could see three inches in the hills and an inch down lower. Showers should last into Monday, with the next round of storms predicted for Tuesday or Wednesday. Next week is looking similar to this week, with another couple cold fronts predicted that will bring snow to the lower elevations and keep the rivers flowing,” Aylward said.

Fishing Report Cards Due Soon
CDFW wants to remind anglers and divers that the due date for turning in steelhead, sturgeon, abalone and North Coast salmon report card data is Jan. 31, 2018.

Anglers and divers must report even if the report card was lost, they did not fish or they did not catch any fish. Cards should be reviewed carefully for accuracy prior to submitting. Harvest reporting can be submitted online at wildlife.ca.gov/licensing/fishing#44521416-harvest-reporting or by mailing the cards to the address listed on the report card.

HASA dinner scheduled for April 14
The annual Humboldt Area Saltwater Anglers (HASA) fundraiser dinner and auction will be held from 6 to 9 p.m. on Saturday, April 14 at the Arcata Community Center in Arcata. Tickets, which are not yet available, are $25 for adults and $10 for children under 12. Food will be provided by Ramone’s and some great items will be auctioned and raffled off. For more information, email hasa6191@gmail.com.

The Rivers
Chetco/Elk/Sixes
“Last week's rain brought in quite a few hatchery steelhead on the lower Chetco, but the upper river has been surprisingly slow,” said Andy Martin of Wild Rivers Fishing. “We caught most of our fish the last few days within sight of the takeout. The little bit of rain on Monday night brought in new steelhead on Tuesday, and the plunkers had one of their best days so far this season. This weekend looks like the river may be just a little too high, and then a major high-water event is in the forecast for early next week. The Elk and Sixes have been slow for steelhead, but the South Coquille has been really good, with most guides catching limits of hatchery steelhead. The Coquille has been crowded. The Elk may be the only river on the Oregon side still in play this weekend.”

Smith River
“Fishing has been decent on the Smith this week, but it looks like we’ve got a pretty good blowout coming,” said guide Mike Coopman. “I’d say the average is about a fish per boat, with scores ranging from zero to three per day. The Chetco has been in good shape, so the fishing pressure has been fairly light here. It looks like we have quite a bit of rain coming on Thursday and Sunday, which should be the first real blowout of the season. Once the water comes back down, we’ll see what we have to work with.”

Eel River (main stem)
The main stem Eel turned green on Sunday, but there didn’t seem to be many fish around. The fish that were between Rio Dell and the forks last weekend likely moved up. The river remained fishable up until Tuesday, but it turned brown overnight on Wednesday and looks to be blown out for quite a while. Flows are predicted to hit 23,000 cfs on Monday.

Eel River (South Fork)
The South Fork was in great shape over the weekend and there were quite a few boats taking advantage of the conditions. There were a few fish caught and scores ranged from zero to two fish per boat. Hopefully the next big rise will bring in some more fish. Forecasted to hit 6,500 cfs on the Miranda gauge on Monday morning.

Van Duzen
The river dropped into shape on Sunday, but blew out again on Tuesday. A few bank anglers were on the water, but scores were hard to come by. The storm on Sunday has the flows ramping up to nearly 13,500 cfs by Monday.

Mad River
According to Justin Kelly of RMI Outdoors, fishing was tough over the weekend on the Mad. “There’s a few around, but not many. The few fish that are being caught are mostly wild as the hatchery fish have yet to show up in big numbers. The river was extremely crowded over the weekend, but the scores were pretty bad. Hopefully this rain that’s coming will bring in some fish.” Kelly added.

Rain on the way, hopefully steelhead too 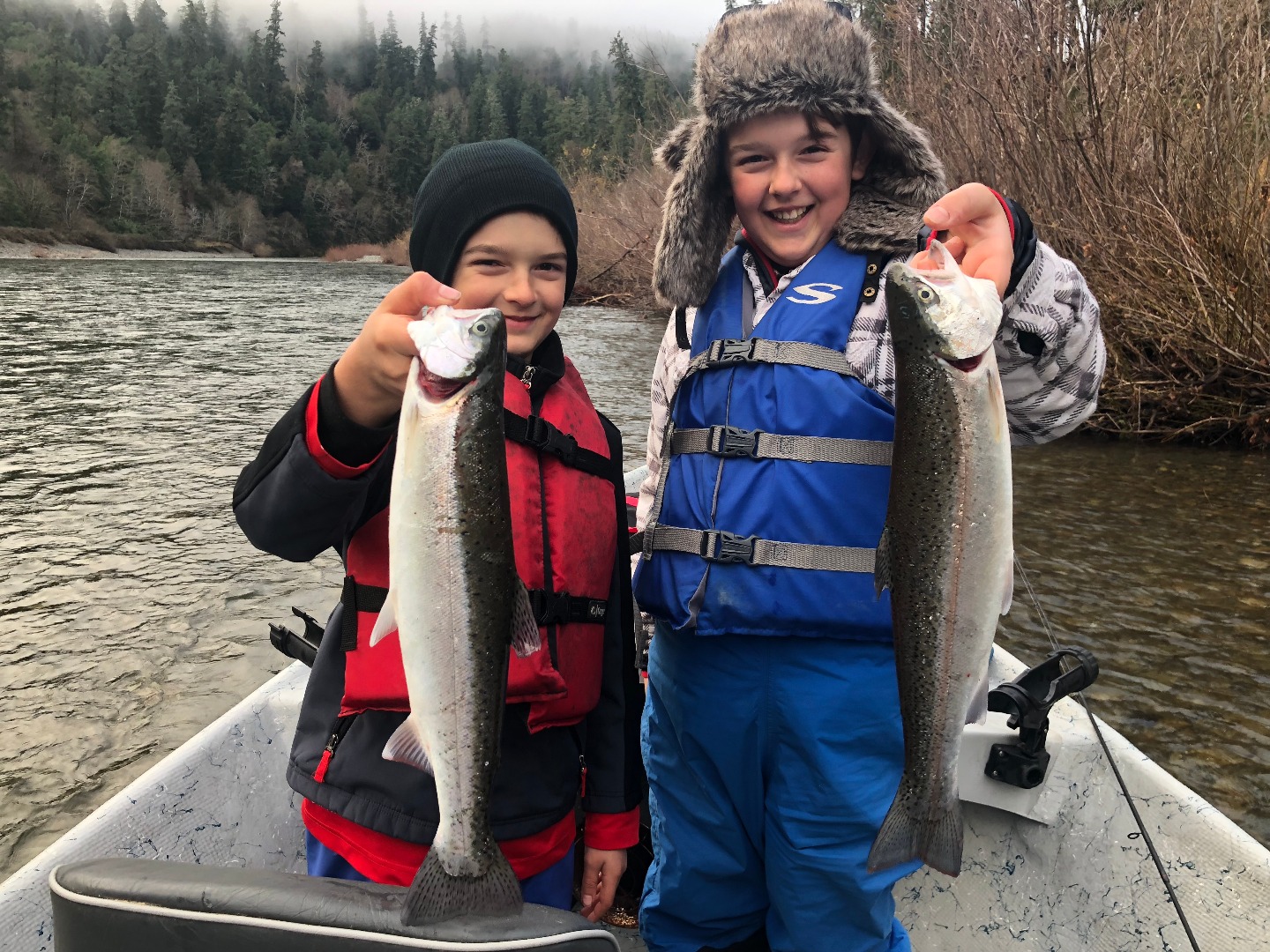