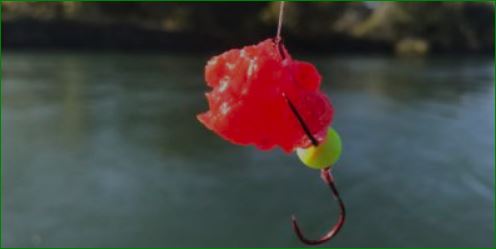 The Sacramento River system in northern California has seen some pretty good King salmon fishing the last five years in spite of a relentless drought in the region that had plagued this watershed for nearly four consecutive years, beginning in 2013.  State and Federal hatcheries worked hard to raise juvenile King salmon for the annual spring releases which go primarily into the Sacramento, Feather, and American Rivers. Hatcheries have seemingly reached their benchmarks for smolt rearing and release and the continued good returns are expected in the foreseeable future.

There are many techniques that are used to catch Sacramento River salmon, but dragging, hover, or back bouncing roe through holding water is certainly at the top of the list, especially in the upper reaches of the Sacramento River below the Coleman National Fish Hatchery near Anderson, Ca.  Coleman NFH releases twelve million fall run salmon smolt every spring which in most years, creates a spectacular fall salmon fishery in the deep swirling holes below Battle Creek which is basically the inlet to the hatchery.  The mouth of Battle Creek is located just above the infamous "Barge Hole" which, in some years, holds hundreds if not thousands of King salmon waiting for those October rains before pushing up Battle Creek and into the Coleman NFH ladder.

From August thru October every year it's not uncommon to see 10-20 boats a day working the Barge Hole for King salmon and as many as 70 boats have been counted during the August 1st opener a few years back.  Anglers and guides alike hang (hover fish) 10-16 oz. cannon ball weights on a dropper in the deep water with 5-6' foot leaders which end with a 1/0 hook and a quarter size piece of cured roe.  The holes and flats above the Barge Hole are also frequently covered by back bouncing eggs and often times in the latter parts of the morning when the boats spread out or head down river, are worked over by boats that are dragging roe (boon doggin) from the mouth of Battle Creek down to the end of the Barge Hole.  All these egg fishing techniques have their standout days, but for any of these egg fishing techniques to produce consistently, your bait absolutely has to be dialed in.  These Kings are the most finicky biters I have ever fished for, and if your eggs lack anything but the best cure and bite stimulants, you're going to watch a lot of fish being caught in other boats.

Fortunately, the Pautzke Bait Company makes the task of producing a great cured egg that these Sacramento River Kings will consistently eat, quite easy.  Their product line offers all of the key ingredients, scents, and bite stimulants needed to cure up some of the best eggs to present to your target species on any body of water, including Sacramento River King salmon.  With everything you will need for a killer egg recipe already in the Pautzke product line, curing great eggs for finicky Sac River Kings has never been easier! I've continued to find success using a specific recipe and its put fish in the box every single trip I've run this season.

Preparing your skeins before curing starts with bleeding out your salmon after it's landed. This will help reduce the amount of blood that will be left in the skeins when you harvest them from the salmon.  I, like most, will take the skeins directly from the salmon before I cut the fillets and place them directly into a Zip Loc baggie and into the bait cooler.  It's stupid hot in August and September in the Sacramento River valley so getting your skeins in a cool place will keep them from really warming up.  When I get home after a day on the river, I will remove any blood that is left in the skeins and put them in the fridge.  It's not critical in my mind to cure them right away, but it should be done within a few days for sure.

I butterfly several skeins and lay them side by side, egg side up.  This allows me to cure several skeins at a time and makes my job easier.  The first ingredient I add is non iodized or kosher salt to the open face of the berries.  Not a lot, but just enough to lightly dust the skein.  The Sacramento River Kings I fish for are 260 miles up river and slightly bumping up the salt content in my cure has proven to be effective.  I will normally hold off on adding Pautzke Fire Power krill because the Pautzke Fire Cure I use already contains it. Some batches I put up will receive a dusting of Fire Power krill after I add salt to my skein, but I usually apply more Fire Power when I'm ready to fish them.

It's Time for the Main Curing Ingredients

After all of my skeins have gone through the aforementioned curing process and are sitting on my work surface, I add the final ingredient to my skeins.  I use a generous 1 second squirt of Pautzke (red) Nector into my plastic baggie containing whats usually about 4 salmon skeins depending on size.  As the curing process begins and goes through its stages of completion, the Pautzke Nector will be pulled back into the eggs giving them the final dose of stimulants needed to create a premier egg that will consistently catch King salmon on the Sacramento Rivers upper reaches.

Curing time on the Sacramento River is very important.  Even though the Pautzke Bait products will have these eggs cured in a few days, I like to give them more time.  It's standard for me to let my eggs cure for 5 days before I prepare them for freezer storage. I put the cure date on my baggies and always know I let them cure for 5 days before freezing them.  There are many different ways to store and freeze cured eggs.  I prefer to put two large skeins in a baggie, freeze them after 5 days and then vacuum seal the whole bag containing the eggs.  I can get 3 years of freezer storage if necessary using this freezing method.

Preparing to Fish Them

Since most of my Pautzke eggs are stored frozen to be used the following season, there is a process I use to prepare them for my fishing trips.  I will thaw my frozen eggs slowly before removing them from the vacuum sealed baggies.  I will open the thawed eggs and drain off the excess juice from the plastic bag and will remove the individual skeins from the baggie.  I drift fish most of the time so I need a firmer egg so they will stay on the hook. To achieve the firmness I desire, I will set out the skeins on paper towels and let them get a little tacky before dusting them with borax.  Once they are firming up nicely after the borax application, I will wrap each skein in a an unscented paper towel, put them in a plastic baggie and refrigerate.  I will continue to monitor the progress of the eggs and when it's time to fish them, in the water they go! 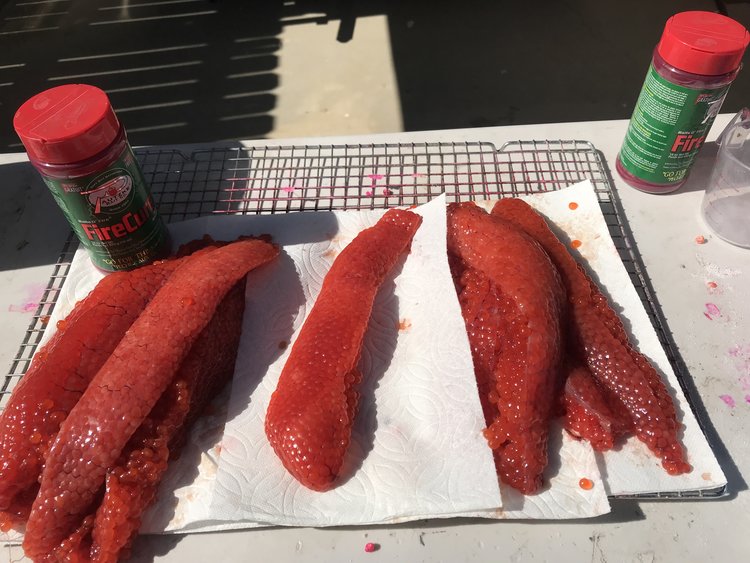 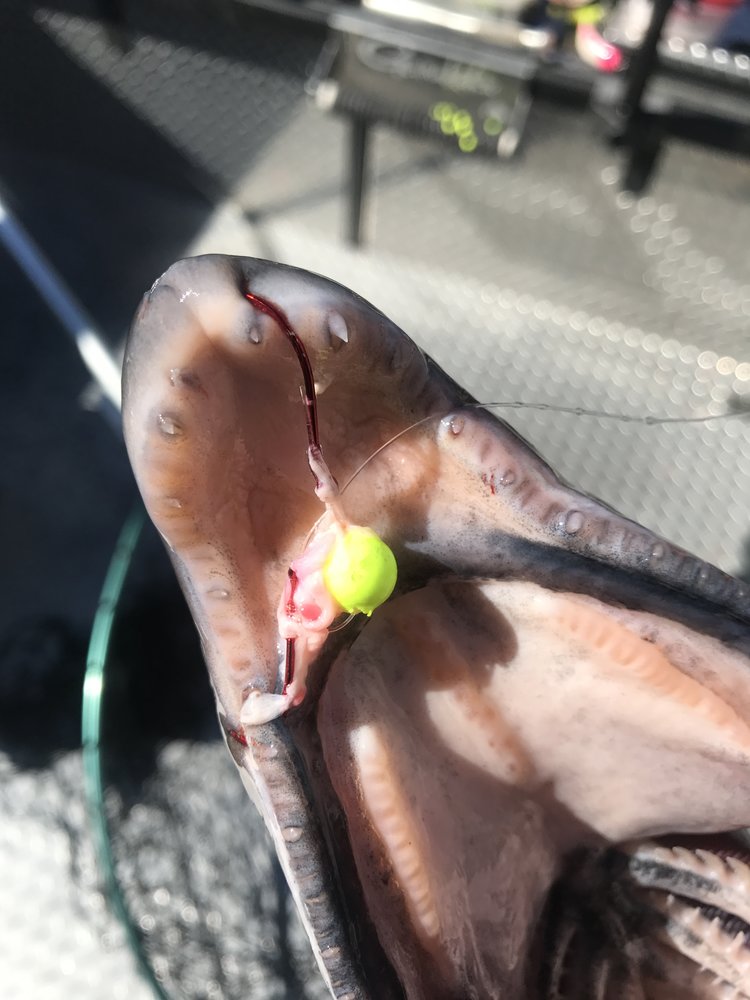 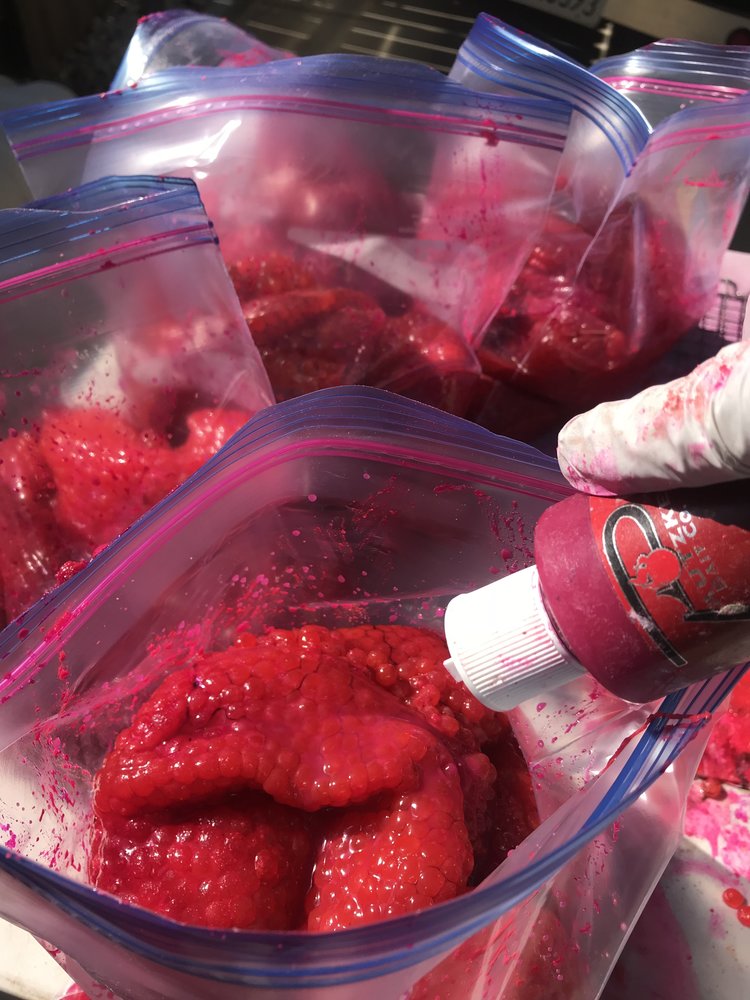 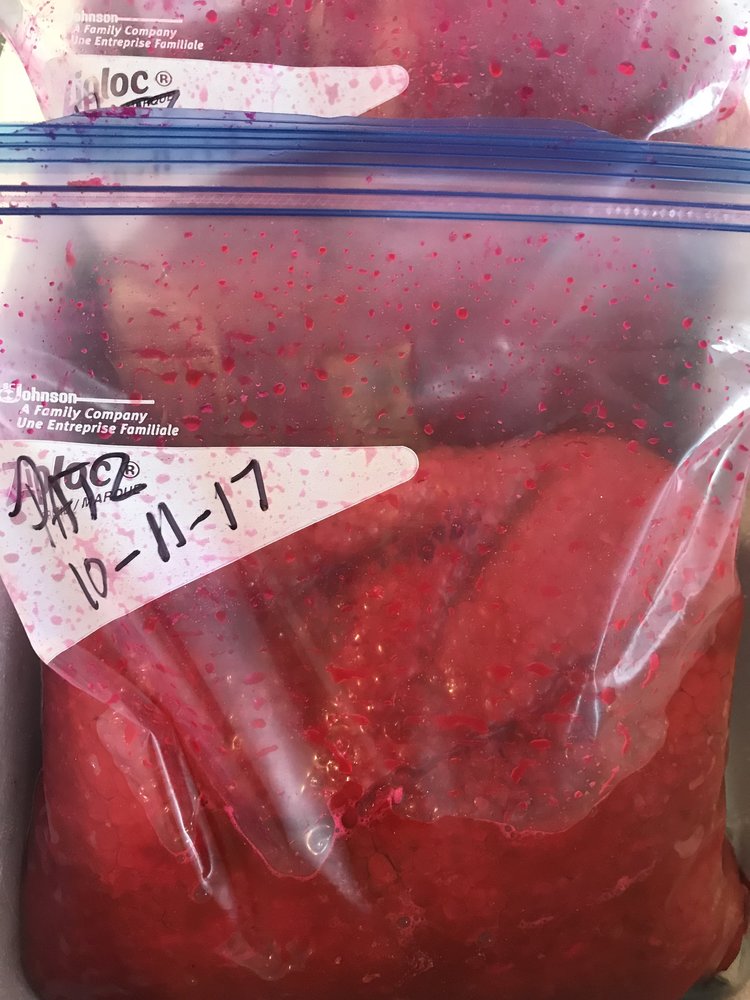 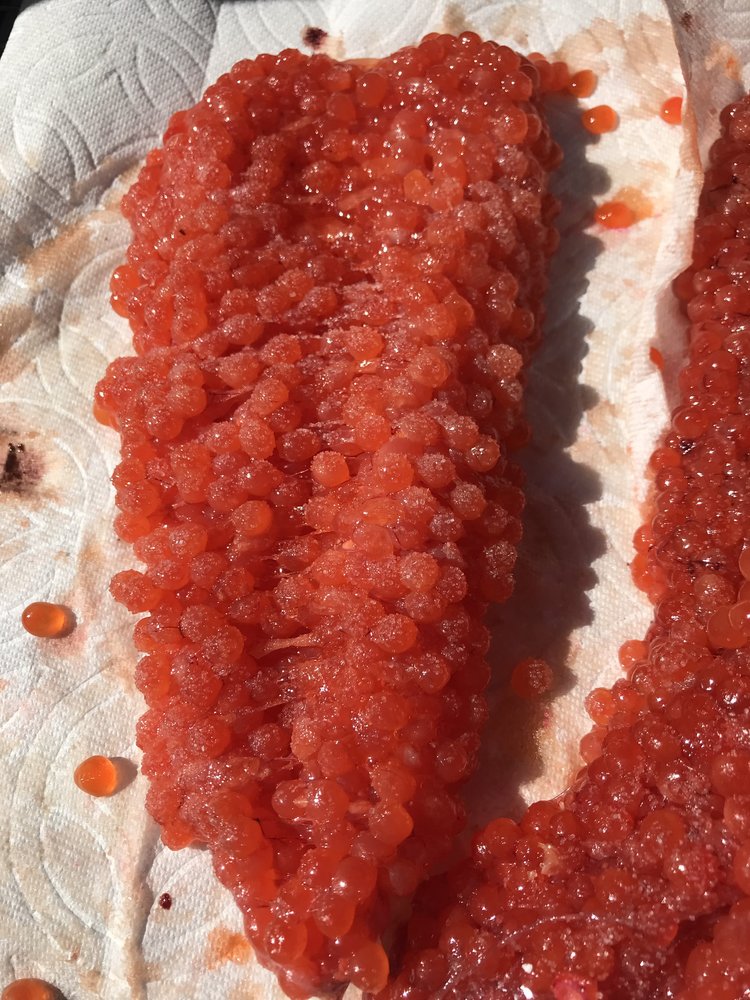 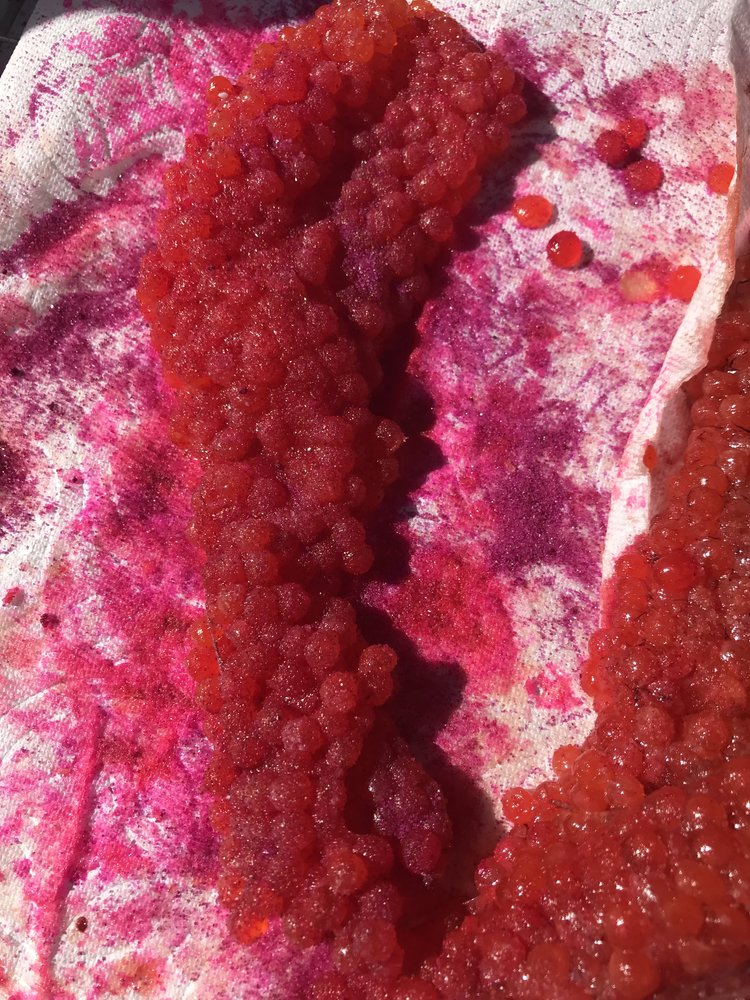 How to Make the Best Drift Fishing Weights! 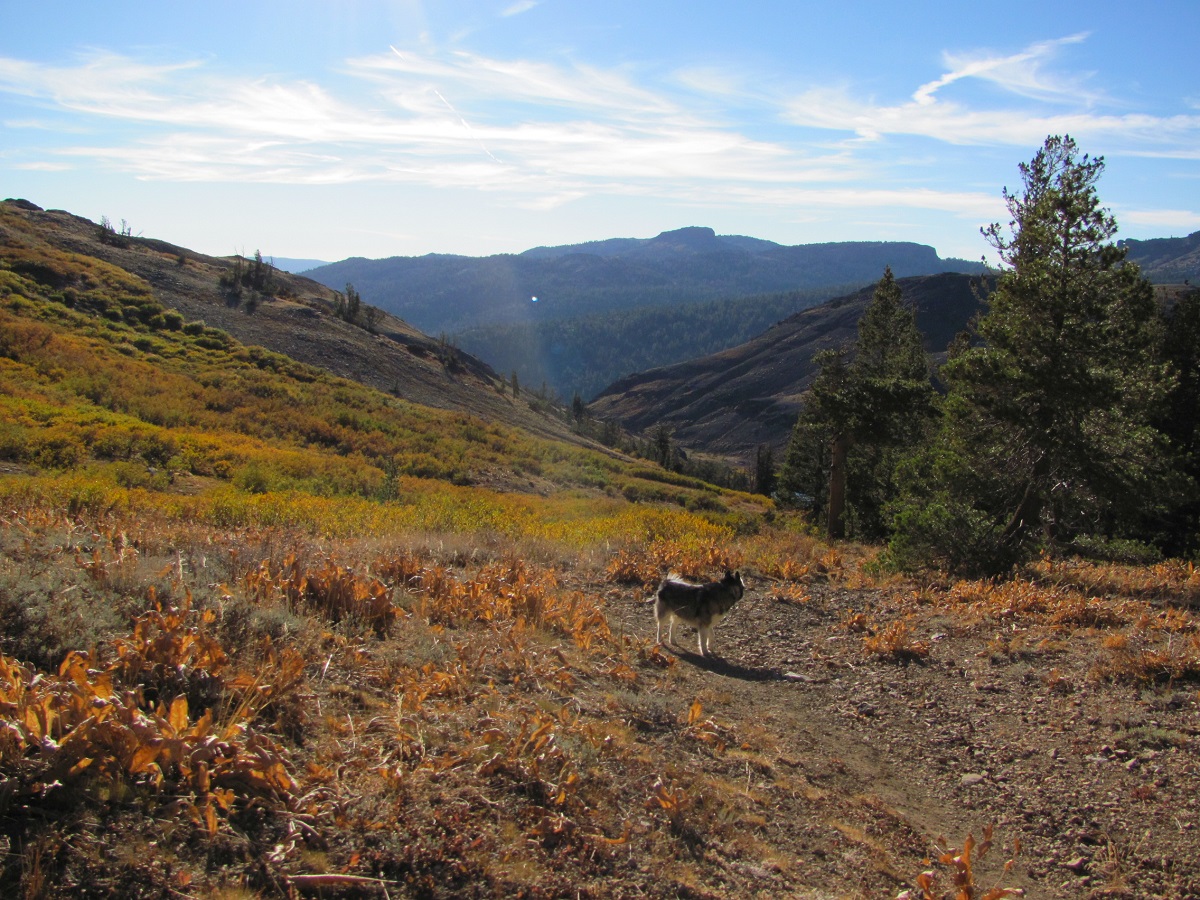 10-3-2017
The Carson-Iceberg Wilderness is named for two striking geological features; the Carson River and a distinctive iceberg-shaped granite monolith. But...... Read More