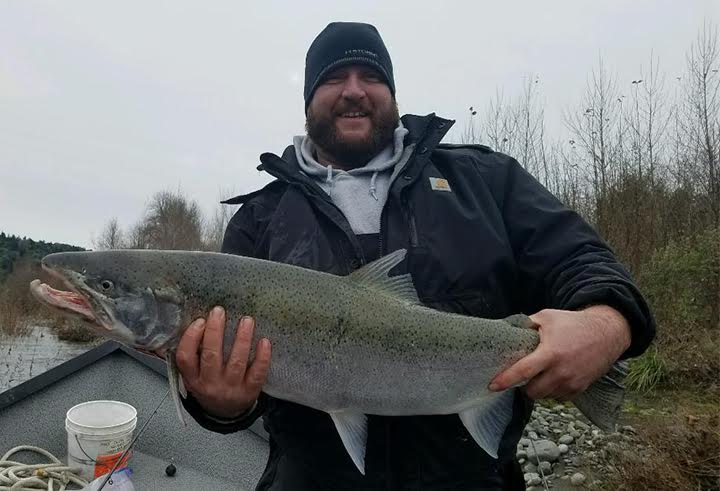 Shaun McNaughton of Garberville landed a nice steelhead on Tuesday while drifting the Chetco River. The winter steelhead run should kick in to gear once the rivers begin to recede following the latest round of storms that have pushed many rivers to monito
Photo Credit: Alan Borges/Alan’s Guide Service

Metalheads, hardheads, steelhead — or whatever you want to call them. This beautiful, chrome, sleek, silver bullet sure has a mind of it’s own. All of this bountiful water flowing through our pristine coastal rivers and streams, and yet, you’re nowhere to be found? I guess that’s what makes these sea-run rainbow trout so special. You never know what they’re thinking. Or when they’ll make an appearance. Or maybe we’re all just a little too excited; given the fact we’re coming off one heck of a coastal salmon season? So as we collectively take a deep breath and enjoy the holidays, let’s all remember the winter steelhead season really gets going after Christmas and is in full swing by the time the New Year rolls around. As the rivers begin to recede to fishable levels in the coming days, I’m willing to bet we’ll see the first wave of winter steelhead make their way into our North Coast rivers. At least that’s our plan.

Weekend Forecast
After a couple of extremely wet systems on Wednesday and Thursday, several North Coast rivers are forecasted to reach or exceed monitor stage. The Smith, Klamath, Mad, and Van Duzen rivers are all expected to reach monitor stage on Thursday, while the main stem Eel at Fernbridge is forecasted to rise above flood stage sometime Thursday evening. According to Reginald Kennedy of Eureka’s National Weather Service, the rivers will all be on drop by Friday morning, with only scattered showers remaining in the Smith basin. “The Eel and Mad basins look dry all the way through the day on Tuesday. The next chance of rain will be Tuesday evening, where we could see a quarter to three-quarters of an inch in both Humboldt and Del Norte. As of now, Wednesday and Thursday both look dry with another weak system moving in on Friday,” Kennedy added.

2017 Fishing license
A reminder that it’s the time of the year to purchase your 2017 license, which is required for residents 16 years of age or older to take fish, mollusks, crustaceans, invertebrates, amphibians or reptile in inland or ocean waters. The cost of a new resident sport fishing license is $47.01. A North Coast salmon report card, which will run you $6.22, is required for all anglers taking salmon in the Smith River System or Klamath-Trinity River System.

If you plan to fish for steelhead, you’ll need to purchase a steelhead report card, which will cost $7.05 again this year. The Dept. of Fish and Wildlife will no longer accept cash for fishing licenses starting Jan. 1.

The window to fish the Chetco was short this week according to Andy Martin of Wild Rivers Fishing. “It dropped below 4,000 cfs on Tuesday, and we did a long drift from the South Fork to Social Security. We hooked and lost an adult steelhead and landed a few half-pounders while side-drifting. We also found a school of salmon and caught a few fish with plugs, but they were dark and we released them all. The river is expected to blow out beginning Wednesday through the weekend because of another big storm. The plunkers got into some steelhead on Monday at Social Security Bar and the Gate Hole near Tide Rock,” added Martin.

The Elk started fishing on Monday reports Martin, but was high. He said, “It was in a lot better shape on Tuesday at 4.6 feet. It will probably be blown out for at least a few days. A drift boat went down on Monday near the hatchery, but it's not known if it was because of the high water, or if the boater was inexperienced. Everyone made it out OK, but it’s another reason to always wear a life jacket.”

Smith River
The Smith fished on Monday and Tuesday, but only a handful of adult steelhead were reportedly caught. It was back on the rise early Wednesday morning and is forecasted to peak just above monitor stage early Thursday morning. If the forecast holds, it should be driftable by Saturday and in prime shape by early next week. Expect to see a few more adult steelhead begin to show up next week.

Main Stem Eel, South Fork Eel, Van Duzen, and Mad
All were on the rise as of Wednesday, but should begin to drop sometime on Thursday. With very little rain in the forecast for at least the next seven days, these rivers could be back to fishable levels late next week, expect for the main Eel. Very few winter steelhead were caught on any of the rivers, but that should change when they drop back down and turn green. For river level predictions, visit .cnrfc.noaa.gov.

Upper Trinity
Steve Huber of Steve Huber’s Guide Service reports the Upper Trinity blew out last Friday due to the heavy rain and snowmelt. “The last few days the river from Lewiston to Junction City has come back into shape and has cleared nicely. We should start to see some new winter fish in the system any time. I’m not sure how long the river will hold up with this next storm, we’ll have to wait and see. If you’re headed this way, keep in mind the rockslide in French Gulch has closed Hwy. 299 in both directions for the rest of the week,” Huber said.

Steelhead season on hold due to rising rivers 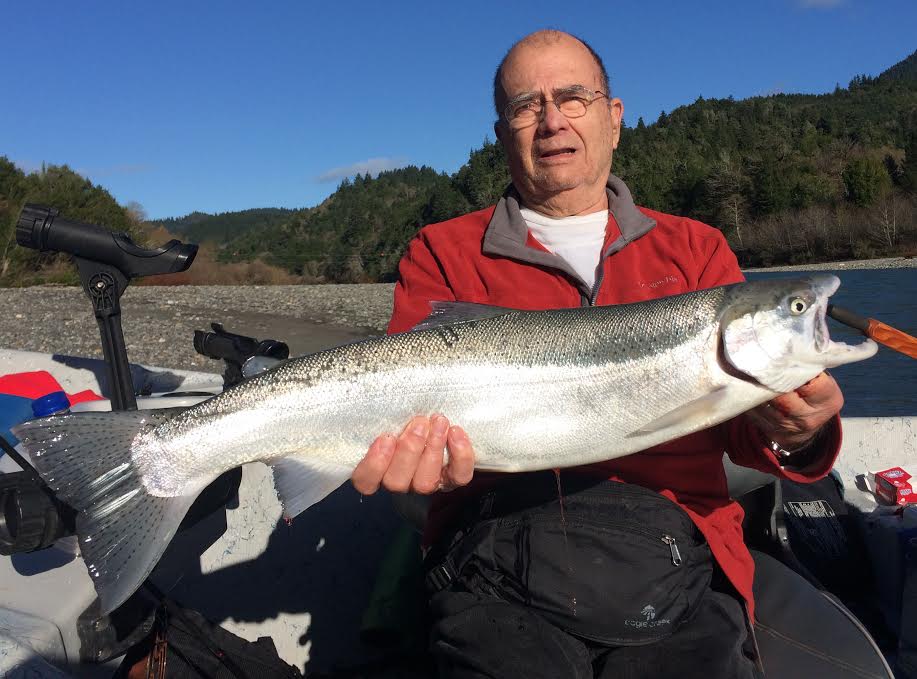 12-7-2016
Upper Trinity should remain fishable While most guides and sport anglers are taking a well-deserved break before the winter steelhead season...... Read More 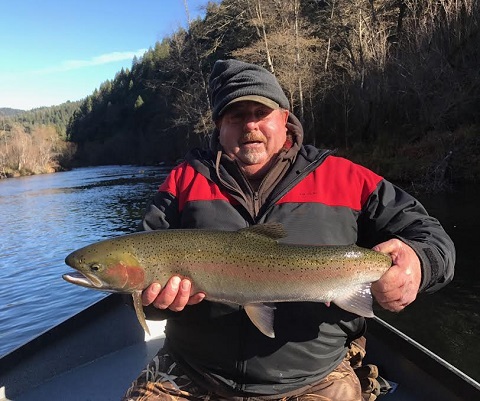 12-1-2016
North Coast rivers are likely seeing the last of the late fall-run salmon push in this week as all of...... Read More